What is the Asus ROG G20CB?

The Asus G20CB is a small form-factor gaming PC adorned with the Republic of Gamers brand – a name and logo usually found on laptops and motherboards.

This machine is aiming high: it’s small, stylish and costs £1,400. That puts it in competition with some of the more luxurious small PCs I’ve seen recently.

The ROG features many of the style points that are typical on gaming systems, especially those from big-brand manufacturers.

It’s got LEDs on its front and base that can be customised in software, and the front and top panels are decorated with a striking, angular pattern – a design Asus says is inspired by Mayan tribes. 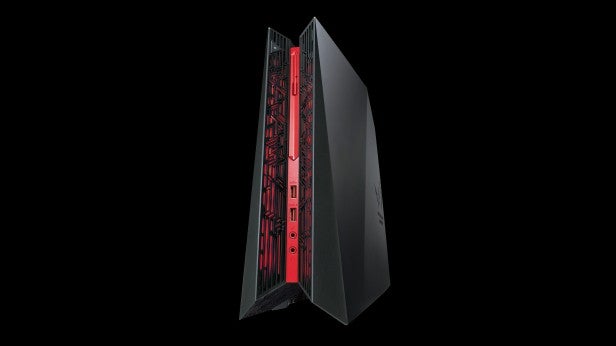 The plastic used has a matte finish – again, normal for many gaming PCs as well as consoles – and is constructed using what Asus calls “aggressive” lines. In reality, that means the G20CB is thicker at its base and tapers to a narrower top section with a cut-away design. It also means that the side panels are angled, which prevents this machine from laying on its side.

The C20CB is not large. It’s 104mm wide at its thickest point and 61mm across at the top, and 340mm tall. That’s about as tall as the Alienware X51 and only 9mm wider at the base. It also compares favourably to the Chillblast Fusion Fury Nano, which is around 100mm shorter than the Asus but 190mm wide.

Elsewhere, this machine’s design is a mix of sensible and strange. The cooling system is smart, with no huge fan exhausts – instead, air is expelled through heatsinks in the fins at the top of the system and through a 1cm-wide channel at the base of the machine.

However, the power supply is awkward: two laptop-style power bricks held together in a frame, with two kettle leads required.

The system can be opened by removing two screws and sliding away one side of the case – easy enough. Once inside, though, components aren’t as easy to access as on more conventional desktop machines. Everything is in a cage: the graphics card sits along one side of the case, the hard disk is another small cage, and the small cooling fans sit above the rest of the components, all of which are locked down. It’ll take a lot of effort to change anything on the inside – and, in any case, opening the machine voids its warranty.

The G20CB comes with a reasonable specification. The graphics card is an Nvidia GeForce GTX 970, which means it’s one of the most powerful single-GPU cards around today: 1,664 stream processors, a 1,050MHz stock clock that reaches 1,250MHz with GPU Boost, and 4GB of dedicated 1,753MHz GDDR5 memory.

Alienware’s machine looks weaker because of its GTX 960 card – a product designed for single-screen gaming – but Chillblast’s system goes further with AMD’s Radeon R9 Fury Nano, which is a high-end card designed for tiny PCs. The G20’s choice is a pretty good middle ground.

The Asus machine’s processor is a Core i7-6700. It uses the 14nm Skylake architecture and has four Hyper-Threaded cores that begin at 3.4GHz and top out at 4GHz. That’s good, but it’s not as good as rivals: they both have the Core i7-6700K. That chip runs at 4GHz with a Turbo speed of 4.2GHz, and it’s unlocked for overclocking – so in the Chillblast machine it runs at 4.6GHz.

The G20CB includes a normal 16GB of memory, and the storage follows the conventional pattern of an SSD with a hard disk. The former is a 128GB Hynix drive, and the latter is a 2TB unit. That’s fine, although rivals are better: the Alienware and Chillblast machines both have 256GB SSDs.

Connectivity is reasonable. The front panel has two USB 3.0 ports, with four more on the rear, and there are six audio jacks. The graphics card has the full gamut of connections: DVI, HDMI and DisplayPort.

On the inside, connectivity is normal: Gigabit Ethernet, 802.11ac wireless and Bluetooth.

The components in this machine run on the H170 chipset. That’s one of the parts that Intel introduced with Skylake processors and the LGA 1151 processor socket. It’s technically not as capable as the Chillblast’s Z170 chipset in a couple of areas but none that are relevant to a physically fixed machine such as this.

My sample is a relatively high-end model, but it’s not the only version that Asus builds. Two other models are available in the UK: the G20AJ and the G20BM. 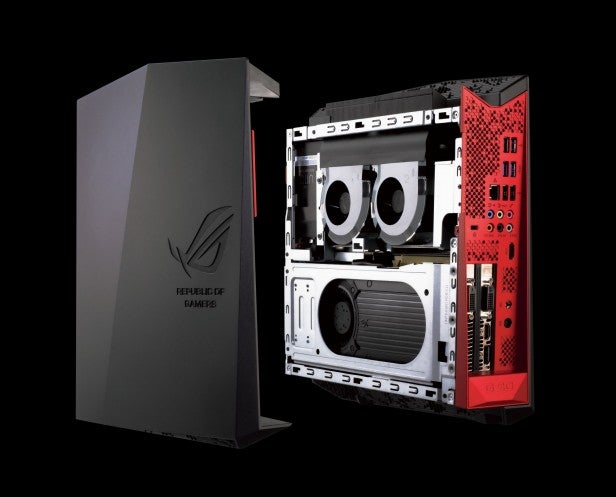 The G20BM is the more affordable of the two alternative specifications. It costs around £730, but makes do with an AMD FX-770K processor that’s only got two cores and a Radeon R7 370 graphics card – that’ll handle 1080p gaming but will struggle with anything higher. It also lacks an SSD – a fundamental flaw. The G20AJ costs £947 and includes a Core i5-4460 processor and GTX 960 graphics.

The Asus’ rivals also have alternative specifications. Chillblast’s machine has one other option: a £1,500 model that uses an overclocked Core i5-6600K processor.

Alienware offers a wider variety of alternatives to the specification my colleague examined. The most affordable machine costs £629 but makes do with a Core i3 processor and a GTX 745 GPU – barely enough for 1080p. A £949 machine includes the Core i7-6700 CPU and a Radeon R9 370 graphics card, and paying £1,049 unlocks the i7-6700K processor.

The G20CB includes a one-year warranty. That’s standard for consumer electronics, but it looks poor when stacked up against the Chillblast and its five-year deal.

Next
Performance, Software and Verdict Review