The Asus PCE-AC68 is a flagship 802.11ac adaptor for desktop PCs. It is designed to attain the fastest possible speeds from both 802.11ac and 802.11n routers works by twinning a powerful PCI Express card with three large amplified antennas.

If you have looked at the score above, you won’t be surprised to learn the Asus PCE-AC68 is what we use for all our 802.11ac router testing. 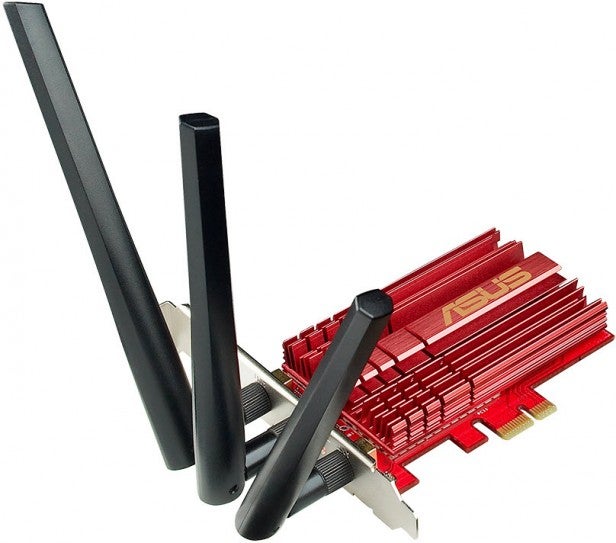 The Asus PCE-AC68 comes in two parts: the PCI Express card that you slot into your PC and its antennas. The card carries a large passive heat sync that allows it to function silently and it is very well built, far more so than some graphics cards we have seen. For those with clear PC cases the red paintwork also looks rather good, like a piece cut off Iron Man.

The antennas can be screwed directly into the card, but situating them at the back of your PC is hardly ideal placement to get the best out of them. Recognising this, Asus supplies a metre-long cable for connecting to the card directly and at the end of the cable is a heavy triangular base to screw in the antennas which allows for better positioning.

The base is magnetic, which lets it clamp to any metallic surface making for potentially easy wall mounting. Happily, the base is heavy enough that it also stays in place on non-magnetic surfaces and Asus has equipped it with soft pads so it doesn’t scratch any surface, particularly magnetic ones.

Our only real complaint with this setup is the length of the cable. One metre is fairly restrictive (especially if your desktop is sat on the floor) and we’d have preferred it to have been at least two metres for greater flexibility. Unfortunately the cable is also moulded into the base so it can’t be easily lengthened or swapped out. 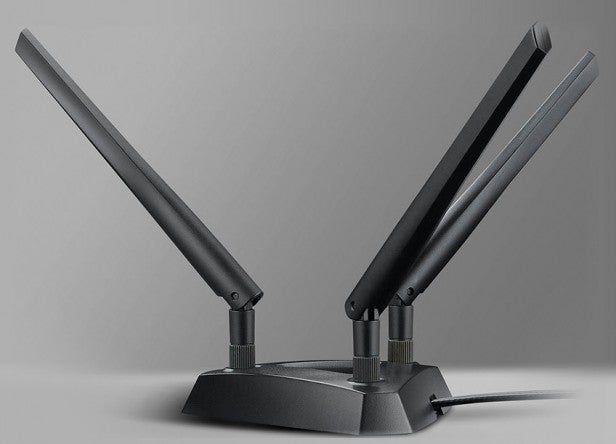 Perhaps the most eye catching part of the PCE-A68’s meaty spec sheet is its ‘AC1900’ rating. This breaks down as theoretical speeds of 1300Mbit 802.11ac and 600Mbit 802.11n. The unusual bit is the wireless n rating (normally capped to 450Mbit) and it comes from use of the same Broadcom ‘TurboQAM’ technology Asus put into its top of the line RT-AC68U ‘AC1900’ router.

TurboQAM claims to improve any wireless n router, but obviously works best with other TurboQAM routers. So far the RT-AC68U is the only one on the market, but it will soon be joined by the Linksys new flaghship EA6900, which we are expecting any day now.

In addition to these speed credentials the PCE-AC68 also supports Beamforming and WEP, WPA and WPA 2 wireless security standards. 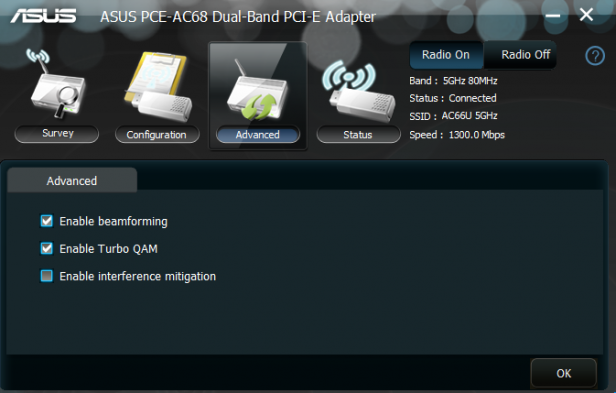 The thought of opening up a PC may scare off some potential Asus PCE-AC68 owners, but it really shouldn’t. Asus has kept the card compact and rigid so it slots easily into a spare PCI Express slot and it doesn’t require any extra power than that received from the motherboard. Simply slot it in, screw it in place (if your chassis requires this) and shut up your case. From them you screw the one metre cable into the exposed back of the card and the antennas into the base at the end of the cable. Easy.

Software setup is fairly straightforward as well. One frustration is we found is Windows (7 and 8.1) can’t install the Asus PCE-AC68 automatically so you will need the driver. Asus bundles this on a CD, but we’d recommend getting it from the Asus’s website as you’ll always get the latest version.

There is Control Centre software that lets you connect to networks and tweak settings such as turning Beamforming and TurboQAM on or off and viewing detailed diagnostics. You don’t have to use it, the PCE-AC68 will also happily work with Windows’ native Wi-Fi control.

Note there is currently no support for Macs and future support seems unlikely with Apple locking down its latest Macs (which come with 802.11ac support in any case).