So how fast is the Asus PCE-AC68? In all truth we don’t honestly know for the simple reason that we are running into the limits of 802.11ac wireless routers before we are hitting the bottleneck of the PCE-AC68.

We know this because we test in real world scenarios, which means using WPA2 security and in a residential environment. From this perspective the maximum throughput we’ve had from any 802.11ac router so far has been (somewhat surprisingly) the TrendNet TEW-812DRU, which managed a blazing 54.3MBps (434.4Mbps).

Contrast this with running files across an unprotected FTP server from a remote location without any wireless interference (the method manufacturers use to claim greater speeds) and we managed to get Asus PCE-AC68 transfer speeds to a mindboggling 86.5MBps (692Mbit) when twinned with the Asus RT-AC68U router. It isn’t realistic, but it shows the speeds the PCE-AC68U can reach and the bottleneck in this scenario is still likely to be the router. Furthermore the initial burst you’ll see if the graph result opposite suggests the PCE-AC68U still has more speed it in, but the router couldn’t keep up.

For some context, we compared this to results from a Linksys WUMC710. This is also an external, triple antenna 802.11ac adaptor but connects to a PC or laptop via Ethernet. It peaked at speeds of roughly 45MBps (360Mbps). Meanwhile a D-Link DWA-182 802.11ac USB dongle managed just over 35MBps (280Mbps) which shows it is often the connecting device rather than the router which is the bottleneck in wireless networks.

Again we pitched the backwards-compatible Linksys WUMC710 bridge and DLink DWA-182 USB Wi-Fi adapter against the PCE-AC68 and achieved speeds of under between 10MBps and 5MBps at 13m using 5GHz and 2.4GHz respectively while a Sony F Series laptop with integrated dual band 802.11n managed circa 6MBps and 2MBps and included several drop outs.

This goes to show many so-called Wi-Fi black spots in homes can be caused by shortcomings in the receiving devices rather than the router itself. This is underreported fact, but one which again shows the benefits of an adaptor as powerful as the Asus PCE-AC68. 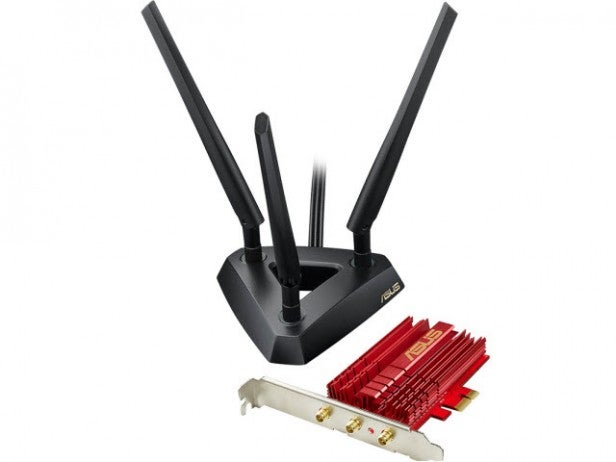 Should I buy the Asus PCE-AC68?

Given it is available from just £68 online we’d say a resounding yes. This is twice the price of most 802.11ac USB dongles, but you’re getting more than twice the performance and something that can unlock the very best speeds from cutting edge wireless ac routers.

We do have caveats. The first is quite simply not everyone needs such a thing. Unless you’re running a local network the Asus PCE-AC68’s wireless AC speeds can more than double the fastest fibre connections even at our furthest testing distance – it’s overkill. Secondly we’d like Asus to fit a longer cable to the PCE-AC68’s antenna base since most desktop PCs tend not to be positioned based on their ability to receive Wi-Fi and the metre only gets the antennas onto a desk rather than up high to maximise signal.

That said for anyone looking to unleash the maximum potential from their 802.11ac routers and local networks, look no further. The Asus PCE-AC68 is a beast.

The Asus PCE-AC68 is quite clearly not a product for everyone, but for those keen to get the very best out of their 802.11n/ac networks it is by far the fastest peripheral we have found and has become a key part of our wireless test equipment. Furthermore it is currently the only wireless adaptor available that can take advantage of the significantly faster 802.11n speeds delivered by Broadcom’s Turbo QAM technology. When combined with its reasonable price tag its target audience should consider it indispensible.