During the course of 2012, budget tablets suddenly got a whole lot better. For under £200 you can now get a seriously capable tablet that can do just about everything a £500 tablet can. The Asus MeMO Pad Smart is Asus’s latest attempt at an affordable 10.1-inch tab. It may have less personality than a bag of flour, but it provides a decent spread of features at a reasonable price. 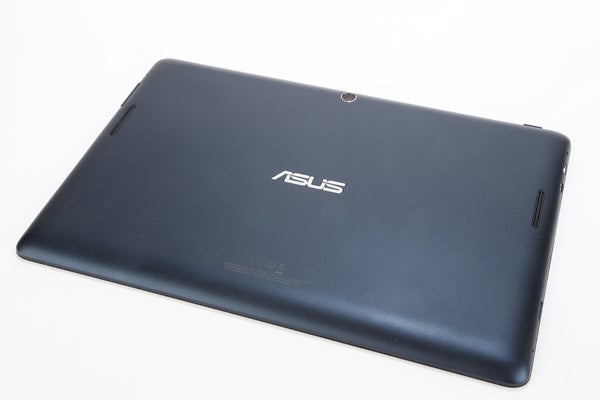 Although the MeMO Pad’s bodywork is thankfully free of any creaks or groans that might cause concern over general build quality, the device nonetheless doesn’t feel particularly high-end. It’s a self-conscious sacrifice clearly aimed at getting the overal cost of the tablet down, however picking up the MeMO Pad after palming an iPad, the Asus doesn’t feel like it’s in the same league as Apple’s device.

However, the MeMO Pad is neither heavy nor fat. In fact, at 580g and 9.9mm thick, its dimensions are similar to more expensive tablets. Aside from a lack of flair, there’s nothing wrong with the bodywork. 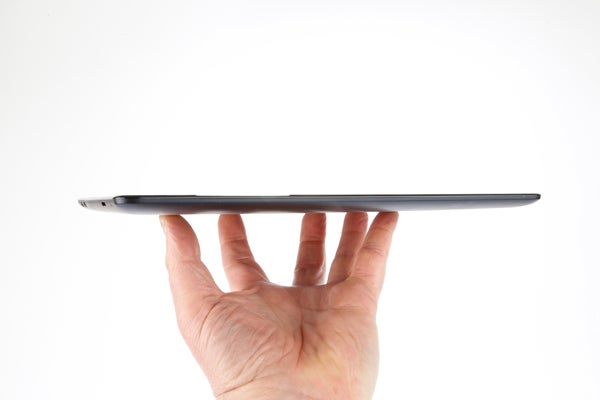 Asus is renowned for making products that techies love, and the connectivity of the Asus MeMO Pad Smart is no different. It employs a microUSB port rather than a proprietary one, and also has a dedicated microHDMI video output as well as a microSD card slot. None are executed with much fuss – there are no flaps and no attempt to hide these sockets – but it’s still a techy box-ticking exercise that many will appreciate. 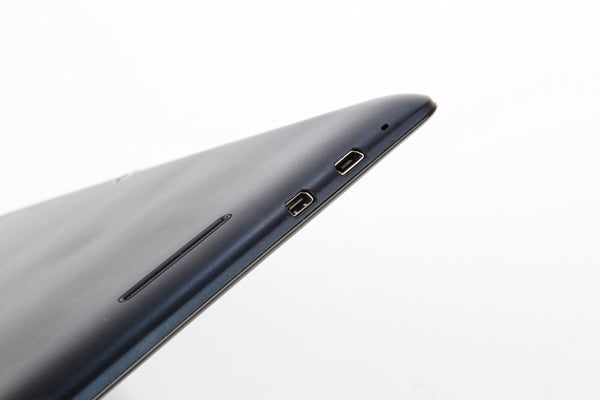 The dedication to providing features often missing from lower-cost tablets continues with the stereo speakers. The two speaker grilles are located on the back of the tablet and produce better sound dispersal than a mono tablet when held in landscape – the usual orientation for movie-watching. The only serious omission is 3G, although this would, of course, push up the overall price of the tablet and no doubt lift it out of the out of the “budget” bracket.

To do that would effectively be game over for the Asus MeMO Pad Smart’s chances of getting a decent audience. NFC is missing too, and while it could be argued that’s a future-proofing opportunity missed on the part of Asus, for the majority of users it will be no great loss. 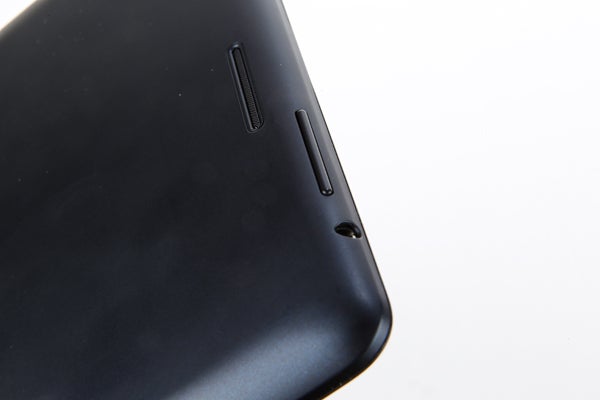 As a lower-cost tablet, the Asus MeMO Pad Smart 10 predictably comes with 16GB of internal memory – the least usually seen in a 10-inch tablet.

This is a mercenary tablet in many respects. Its design is entirely vanilla, from the chunky bezel, the lack of style tweaks – or style full stop – to the generic-feeling construction. If you care about these kinds of things, you’re looking at the wrong tablet. Practicality and flexibility are key values for the Asus MeMO Pad Smart, not fluffy stuff like how the thing looks or feels. In a way, that’s actually quite admirable.

While we can just about live with the utilitarian design, the screen specifications are less easy to stomach. That’s primarily because, at just 1,280 x 800-pixels, the MeMO Pad’s 10-inch IPS screen feels more like a throwback to something you’d find on a 2011 or 2012 tablet.

That said, IPS (In-Plane Switching) is a great panel technology that quickly became the standard screen tech for tablets after it was used in the first iPad. It offers great viewing angles, which are much more important in a tablet than, say, a laptop. 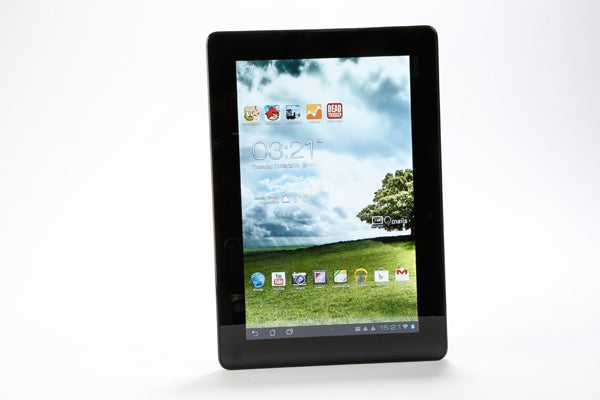 The MeMO Pad’s IPS screen delivers these impressive viewing angles too, but otherwise the display is not all that hot. It looks a little washed out, and often severely blown-out at top brightness. Now that we’ve been spoilt by high pixel density tablets like the Google Nexus 10, the relatively low-resolution screen here appears a little rough and pixelated.

The MeMO Pad uses the same resolution as the smaller, 7-inch Google Nexus 7, however 10.1-inches is a little too far to stretch this resolution over these days.

It also lacks an oleophobic coating, something that reduces the appearance of fingerprint smudges – an unavoidable by-product of touch-screen technology. After using the MeMO Pad for only a few minutes, the tablet becomes covered in mushed fingerprints, which are quite visible in strong light. An oleophobic finish is more-or-less taken for granted in more expensive tablets, but take it away and you’ll certainly miss it. 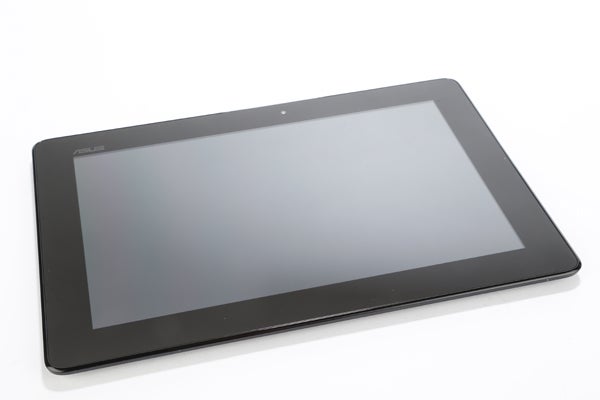 The Asus MeMO Pad Smart runs on Android’s 4.1 Jelly Bean OS with minor Asus adjustments. These are largely based around the presence of additional apps though, rather than dramatic changes to the user interface.

Asus has supplied a few visual tweaks though. The icons in the navigation bar have been redesigned, and as standard the Asus MeMO Pad Smart has a snazzy Asus weather and clock widget on its lead home screen. The only functional change to the way you use the tablet is a navigation bar lock switch right in the middle of the navigation bar. This disables the other navigation bar buttons, so you don’t accidentally press them.

Asus has also inserted its own virtual keyboard. It’s more colourful than the standard one, and has a slightly different layout that packs more keys on to the screen, but is it a winner? Not particularly – it lacks Swype-style gesture input and any dynamic word completion. However, when it’s so easy to switch to another keyboard, and the standard Android one comes pre-installed, it barely matters.

We like Asus’s approach to Android customisation in the MeMO Pad Smart. The light nature of the tweaks, and the use of the speedy Jelly Bean version of Android means the tablet runs at a fair old lick. It uses a quad-core Tegra T33 1.2GHz chip, the same found in the Google Nexus 7. It’s slower than the quad-core Krait processors found in many of 2013’s phones and tablets, but the difference will only be particularly noticeable in high-end games. 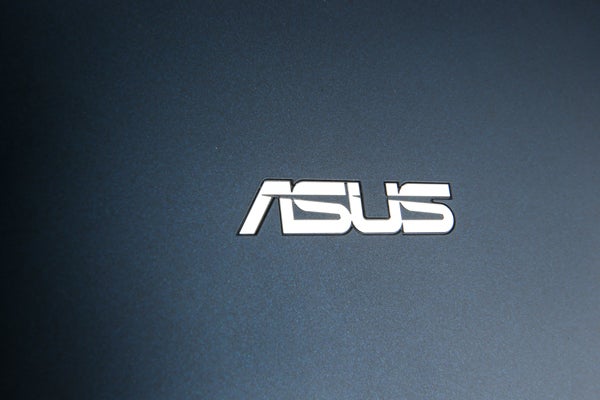 For example, while Real Racing 3 plays just fine on the MeMO Pad Smart 10, the frame rate appeared lower than the same game running on an iPad 4 – despite the iPad’s increased screen resolution. That said, while we have complained about the limited screen resolution here, it is precisely this that should keep high-end games running fairly well for a while to come. Rendering more pixels requires more power.