What is the Apple Mac Pro?

The Mac Pro is that computer you would dearly love to own, but probably never will. Not only is it expensive, with the base-spec leaving you no change from £2,500, it’s not really a consumer PC.

You could use it as such, but the dual AMD FirePro graphics and numerous options, topping out with a 12-core CPU and 64GB RAM shows this is no ordinary PC. It’s a PC meant for sound engineers, video editors, and other creative professionals – basically anyone who needs a standard desktop that can handle serious intensive work.

In other words the Mac Pro is, in the old school parlance, a workstation. But it is nothing like any workstation you’ve seen before. The Mac Pro is one of those great moments where form and function are totally at one, and that’s a very exciting thing indeed. 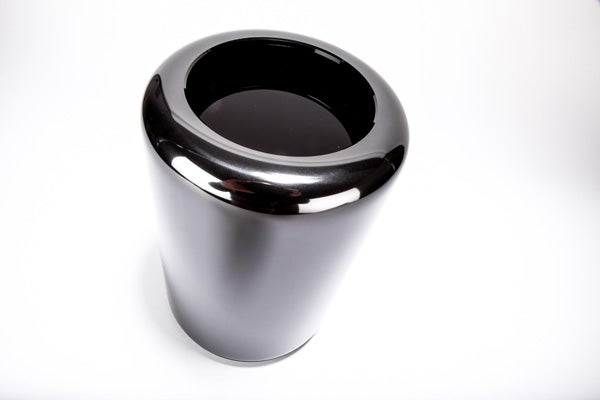 The Mac Pro wills you to just stop and stare a while. We don’t get too many visitors to our corner of TrustedReviews towers, but the Mac Pro has seen assorted randoms pop by for a peek and nose around. We felt duty bound to oblige.

In this sense the Mac Pro is the best kind of Apple product, one that makes even the most ardent Apple detractors nod approvingly.

To understand why you need to appreciate how much power is crammed inside the Mac Pro, and how astounding it is considering it’s about the same height and width as an iPad Air. Sure, it looks lovely on the outside and it’s easy to admire that, but it’s what’s going on inside that’s really interesting.

No matter which version of the Mac Pro you start with you will always get two GPUs. In the base-spec it’s two 2GB AMD FirePro D300 cards, which are joined by a quad-core 3.7GHz Intel Xeon E5 processor, 12GB 1,866MHz DDR3 ECC memory and 256GB PCI-e flash storage. To fit that much hardware into a PC this size is a serious feat of engineering. 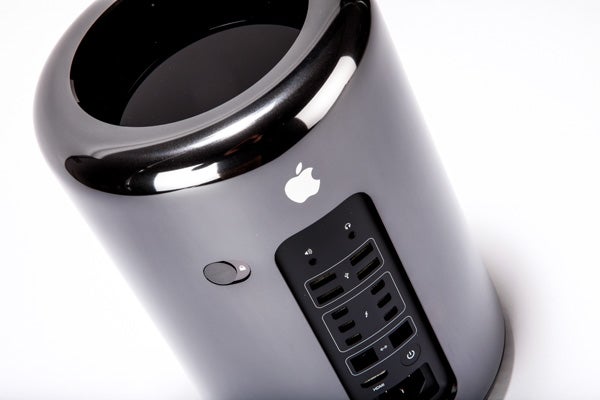 To do so Apple has designed a custom ‘thermal core’ for the Mac Pro. The inside of the Mac Pro is basically one giant heat sink that runs from top to bottom with the two GPUs and the motherboard bolted to it.

This core combines with a single large fan at the top to draw cool air in from the bottom to and kick it out the top. It’s an incredibly efficient system that, not matter what we threw at it, always kept the Mac Pro running cool, and with barely a whisper of fan noise.

There are some other nice design flourishes, too. The design of the ‘trash can’ exterior means it’s very easy to simply pick up and carry your Mac Pro somewhere else.

It weighs 5kg, which is heavier than you expect when you look at it – but is very light by workstation or even standard desktop PC standards. You really could pop it in a bag and take it to wherever you need to use it. It also, dare we say it, makes it very easy to steal as there’s locking mechanism to secure the Mac Pro to a desk.

The other thing we like is how easy it is to take the casing on and off. It slides on and off with ease with a single switch locking it into place. Inside the RAM and flash storage is user accessible and replaceable. The GPUs aren’t user replaceable per se given they’re custom designed for the Mac Pro, but they are removable and Apple hasn’t ruled out offering upgrades in future. 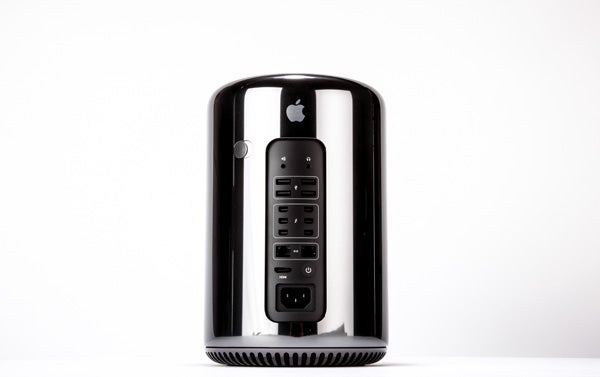 At the rear is a decent selection of I/O ports dominated by the six Thunderbolt 2.0 ports. We’ll cover these in a little more detail later on, but Thunderbolt 2.0 offers a maximum 20Gb/s throughput and can support up to 36 daisy-chained peripherals.

There are four USB 3.0 ports, two Gigabit Ethernet ports and also an HDMI port. Sadly, however, the HDMI port is only a version 1.4 port, not 2.0. This means it can’t support 4K resolution at 60fps without some compromise in colour sampling, a common issue with most current 4K TVs with the exception of the Panasonic L65WT600. 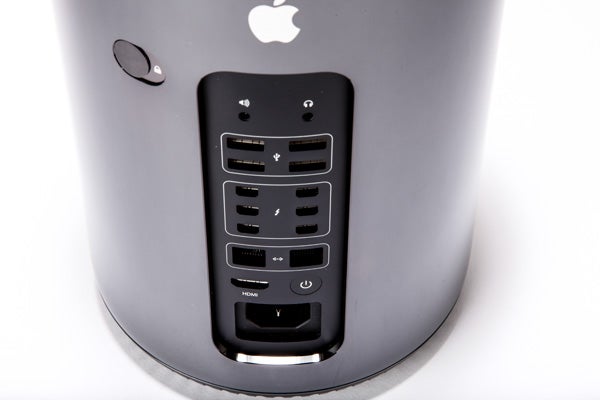 The Mac Pro supports up to three 4K resolution screens connected at once, or up to six non-4K monitors. If you think you need more than this then you’re in a very exclusive club indeed.

Finally, inside there’s Bluetooth 4.0 and 802.11ac Wi-Fi wireless cards as you’d no doubt expect at this price. There’s a combined optical/analog line out for audio, and a separate headphone jack. There’s also a built-in speaker, which is a surprisingly welcome addition to ensure you don’t have to plug in speakers or headphones to benefit from audible system alerts.