While there isn’t that much to setup per se with a Mac Pro, it’s here that our first criticism of the system is exposed. Support for 4K monitors is, at present, a little lacking.

A key purpose of the Mac Pro, among other things, is to act as the perfect 4K video editing PC — it’s the one thing Apple talks about most. As we’ll get into in a moment, Apple’s Final Cut Pro X software is specifically engineered with the Mac Pro in mind, to the point where it can handle some pretty astonishing workload levels with little in the way of inconvenience.

We hooked up Dell’s 4K monitor (review coming soon) to the Mac Pro and while it works absolutely fine at native resolution, you get none of the ‘HiDPI’ modes available on Apple’s MacBook Pro line-up.

What does this mean? It means that while the 4K resolution is fantastic for video and photo editing, UI elements are often a little small for comfort and are bound to cause eye strain for some. The only alternative at the moment is to use a scaled, lower resolution, which rather defeats the point of having a 4K monitor.

There are hacks around this problem, but none can guarantee you’ll get an ideal experience that works perfectly. We suspect and hope that Apple will rectify this problem as more 4K monitors go on sale, but it’s an irritating point that any early adopters will have to traverse to make the jump to 4K straight away. 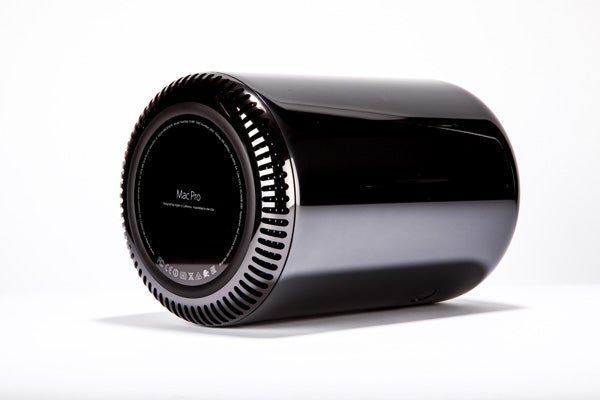 Such issues begin to melt away once you start actually using the Mac Pro, however. Our system is the entry-level spec, but even it is a seriously powerful PC that cuts through intensive tasks with ease.

We started our testing by running Geekbench 3. Our point of comparison for this test is our recent review of the Haswell revision of the 27-inch iMac — a useful comparison in this case given we reviewed a top-spec config of the iMac that includes the fastest CPU and GPU option, which runs to £2,350 inc. VAT.

Geekbench 3 is predominantly a CPU benchmark, so we weren’t especially surprised to discover that the iMac we tested (which had a 3.5GHz quad-core Core i7) nearly matched our Mac Pro (3.7GHz Xeon CPU) in this particular test. The Mac Pro scores 14,734 against the 14,462 of the iMac. These are both exceedingly high scores, but Geekbench 3 doesn’t tap into the Mac Pro’s true strength: its dual GPUs. 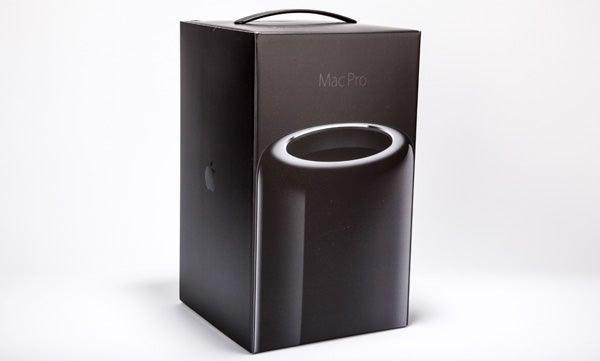 For that you have to fire up Final Cut Pro. The real world benefit of the power and tight integration of software is that you can work with multiple videos streams in real time and apply effects to them in real time, reducing (and in most cases eliminating) the need to spend time rendering your changes. Your mileage will vary depending on the spec you choose and the kind of work you’re doing, but with a top-spec Mac Pro (as 12-core CPU and the top-end FirePro D700 graphics) Apple claims you preview 16 4K video streams and apply effects in real time.

Ultimately, though, even with the entry-level spec you can view and apply effects to several HD and 4K video streams in real time — a lower spec simply limits the numbers you can play with. Not only will this save videographers a great deal of time and money, it ultimately means you can spend more time editing and experimenting to get the perfect result knowing you aren’t constrained by the time needed to render.

This is great if you’re using Final Cut Pro, but it’s a reminder that you really need software support to make the most of the power inside the Mac Pro. Apple’s Final Cut is the best example of a program that makes best use of the dual GPUs on-board, but you shouldn’t assume that the programs you use every day will do the same. Support will improve over time, of course, but it’s worth checking before you buy to decide whether it’s worth waiting. 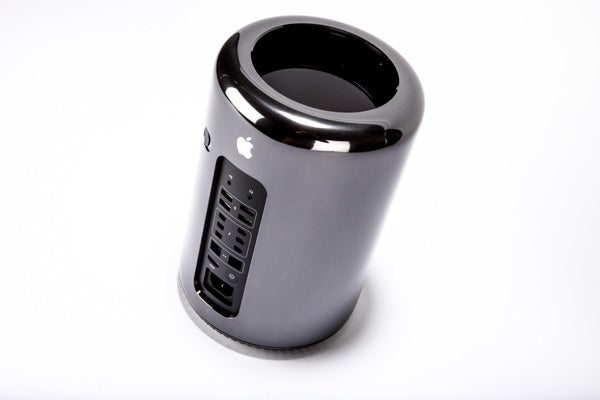 In theory the Mac Pro ought to make an impressive (though not outstanding) gaming machine, too. This is limited, however, by the same issue mentioned above: its performance is totally dependent on the individual game addressing the two GPUs present as by default. This rules out our usual cross-platform game benchmark, the very strenuous Unigine Heaven benchmark, which only saw one card.

There is a workaround, though, because by Bootcamping and installing Windows you can rely on the universal dual GPU support offered by AMD’s Crossfire drivers. Sadly we didn’t have enough time before Apple snatched our review sample back to test this out, but others have and verified that it works a charm.

The final piece to consider in the Mac Pro’s performance is the SSD. Like all Macs now, it uses a PCIe bus to dodge the bottleneck of the SATA interface that is now too slow to accommodate the fastest SSDs. It’s easy to see why as our SSD read and write test recorded 797MB/s write speeds and 940MB/s read speeds. No bottleneck there, then. 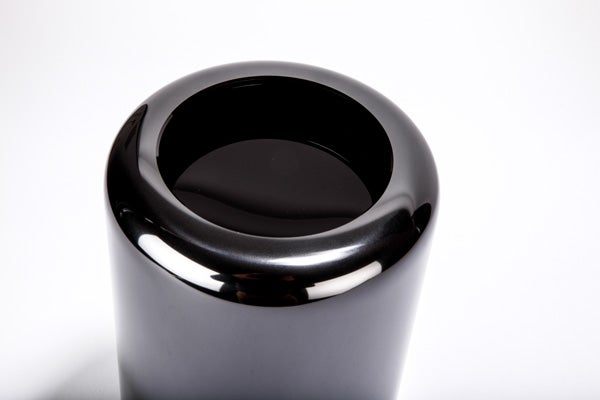 We love all this raw power, but the truly mind bending quality of the Mac Pro is how cool and quiet it remains while doing all of this. Even when you’re pushing the system to its limits the most you’ll hear is a soft, barely discernable whir. It’s so quiet you won’t hear it over the top of the air con and general background noise in any office.

To verify this fact we ran a stress test overnight. We returned the following morning to find the Mac Pro still running as stable as when we left, and was still so quiet we could only hear it by putting our ear to the top, where the air escapes. The case does get mildly warm, but in our experience never so hot to be dangerous or even uncomfortable to touch.