The new AMD Ryzen 2 processors aren’t quite the revelation of the first-generation chips – but faster clock speeds, greater overclockability, AM4 motherboard compatibility and competitive pricing make them well worth a look.

The AMD Ryzen 7 2700X is AMD’s flagship CPU. Built using a new 12nm manufacturing process, it’s basically just a speed-bumped version of last year’s AMD Ryzen 7 1800X, but there are a couple of new features under the hood.

Primarily, the new faster base clock speed of 3.7GHz and boost clock speed of 4.3GHz will be the main attraction of this processor. That and its eight cores, simultaneous multithreading, and much better overclocking.

A recent price cut has also made the Ryzen 2700X hugely competitive against the new 9th Gen Intel Core processors. Despite the power of the new Intel Core i9-9900K CPU, the Ryzen 2700X offers a similar performance for 4K gaming but for half the price.

It’s easy to forget just how big an impact the Ryzen 1800X had only a year after its launch. AMD hadn’t been able to match Intel in terms of clock-for-clock performance for ten years, and suddenly it had parity again.

Add in the fact that Intel had for ages topped out at four cores for any of its mainstream processors and the arrival of a fast, eight-core chip from AMD meant Intel had to respond.

A year later, and the CPU landscape has changed quite a bit. Towards the end of 2018 Intel launched its 8th Gen Core processors, which saw a complete overhaul of the company’s lineup. Now you could get six-core processors at the top end and even entry level chips offered quad-core performance; previously they’d been restricted to dual-core. All this without any significant increases in price.

What’s more, with this launch Intel extended its lead over AMD in terms of clock speed. The Ryzen 7 1800X tops out at 4GHz, while the Core i7-8700K hits 4.7GHz. That’s a significant difference whichever way you look at it, and Intel’s chip could overclock further too. In particular, this meant Intel retained its crown as the top choice for gamers, as clock speed remains king in that domain.

All of which brings us to the second generation of Ryzen. It was clear that AMD needed to up those clock speeds, which is precisely what it has done. 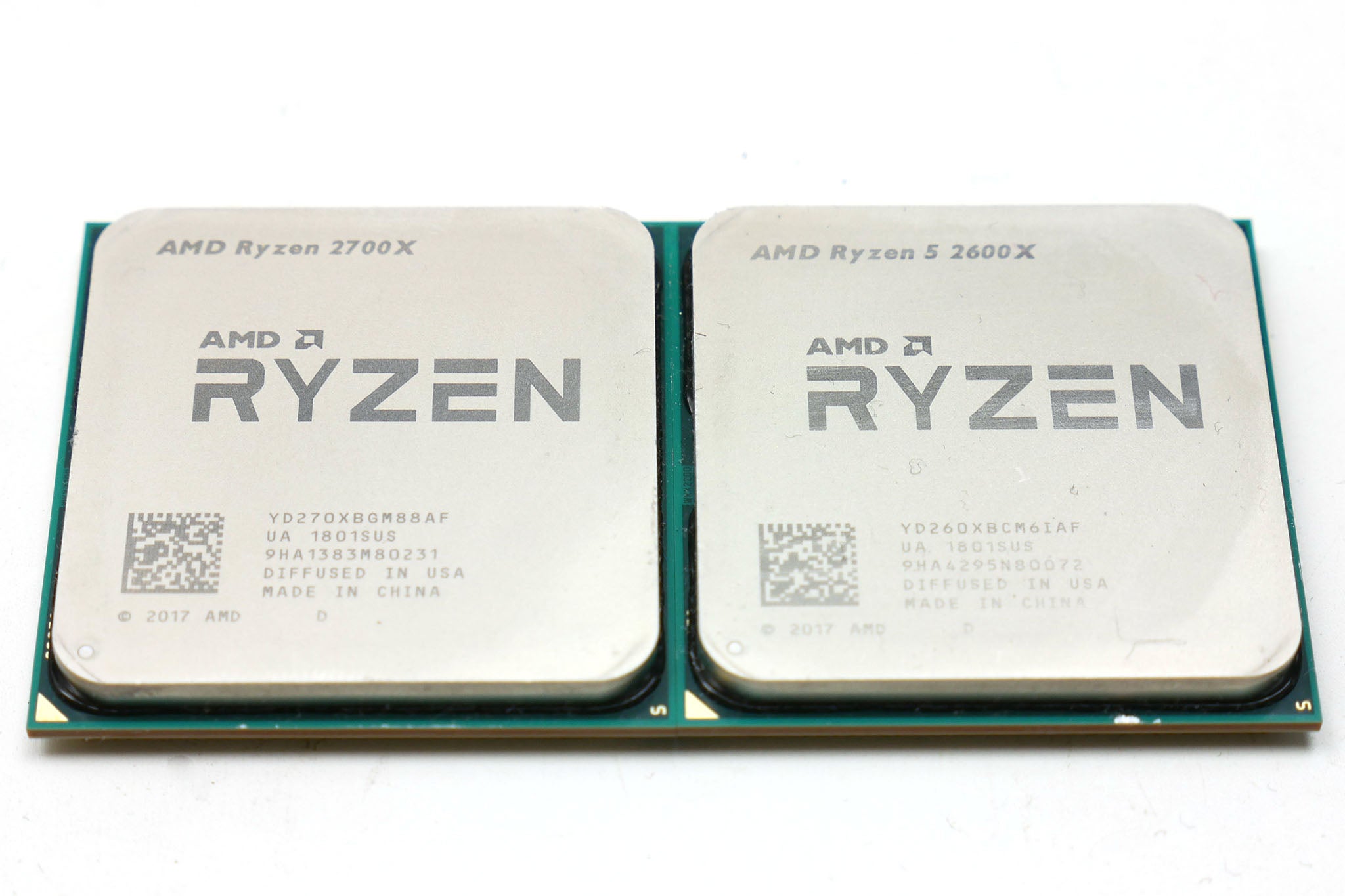 Now, while these aren’t exactly astronomical leaps, they’re enough to keep AMD in contention – especially if it can also offer those same speeds on lower-tier, quad-core products. An eight-core chip such as the Ryzen 7 2700X is actually overkill for most users, but a quad-core Ryzen running at 4-4.3GHz could be the ideal choice for gamers on a budget.

Right now, there are just four processors launching. There’s the slower eight-core Ryzen 7 2700 along with two six-core Ryzen 5 models. The Ryzen 5 2600X is an upgrade to the 1600X of last year, retaining the same 3.6GHz base clock speed but the boost speed increases from 4GHz to 4.2GHz. The Ryzen 5 1600, meanwhile, sees an increase of 200MHz for both its base and boost clock speeds, over the Ryzen 5 1600 of last year.

Beyond this, all four processors are relatively unchanged in terms of core features. All have slightly larger L3 caches, which helps to reduce the need for fast RAM to get the best performance from these processors.

Otherwise, they use the same Zen architecture (we won’t cover that much here – you can read more in our 1800X review) and they fit in the same AM4 motherboards. That said, there are a few tweaks that are worth a mention.

There are two key technologies at play on these processors, which, although not brand new, have seen significant improvements. The first is Precision Boost 2.

Precision Boost determines how fast each core of the chip should be running, depending on the workload. As any given core is assigned a task, it will ramp up from its power-saving speed (in this case, 2.2GHz) to a minimum of the base clock speed (3.6GHz).

Beyond that, Precision Boost will continually bump up the clock speed by 25MHz until it can ideally hit the boost clock speed (4.3GHz). It’s all about getting the maximum performance from the CPU when it’s needed, but saving power when it isn’t.

The original version worked well enough, but it had a key limitation: if more than two cores were demanding CPU time, it would automatically drop to a slower ‘all-core’ boost speed – even though there was no immediate thermal or electrical reasons why the cores couldn’t run faster. This meant that while the advertised boost speed of the 1800X was 4GHz, the actual boost speed whenever more than two cores were active was 3.7GHz.

With Precision Boost 2, this all-core state is now gone. Instead, the processor constantly tries to run every core as fast as possible when needed, only reducing clock speeds if temperatures are becoming too high or there’s some other specific reason.

The upshot is that for scenarios such as gaming while streaming, or other types of multitasking where you aren’t completely maxing out the whole processor – as you would with a demanding multi-thread task such as video encoding – you should see better performance.

The second technology is XFR2. This is similar to Precision Boost 2 in that it concerns managing clock speeds. But here it’s about providing a final extra boost if the CPU isn’t too hot. XFR could boost the clock speed of up to two cores in increments of 25MHz, up to a maximum 100MHz above the rated boost clock, if conditions allowed.

With XFR2 this can now be applied to all cores. So, if you have a particularly beefy cooler then you can squeeze out even more performance.

Neither technology absolutely revolutionises the Ryzen processor lineup, but it’s good to know that you should be getting every possible ounce of performance from these chips.

A fair proportion of the clock speed improvements we see here can be put down to a change in manufacturing. The previous-generation Ryzen chips were built on a 14nm process; the new chips use a 12nm process.

This smaller transistor size makes for lower power usage – and thus less heat – and allows more chips to be made from each wafer of silicon, in turn reducing manufacturing costs per chip. The upshot for buyers should be faster, cheaper chips that use less power – or at least no more power than previous generations, despite the increased clock speed.

However, when it comes to power usage, the Ryzen 7 2700X AMD hasn’t quite managed that. The 1800X had a TDP of 95W, whereas the Ryzen 7 2700X hits 105W. It isn’t a difference that should fundamentally change whether or not you opt for this chip, but it’s surprising. 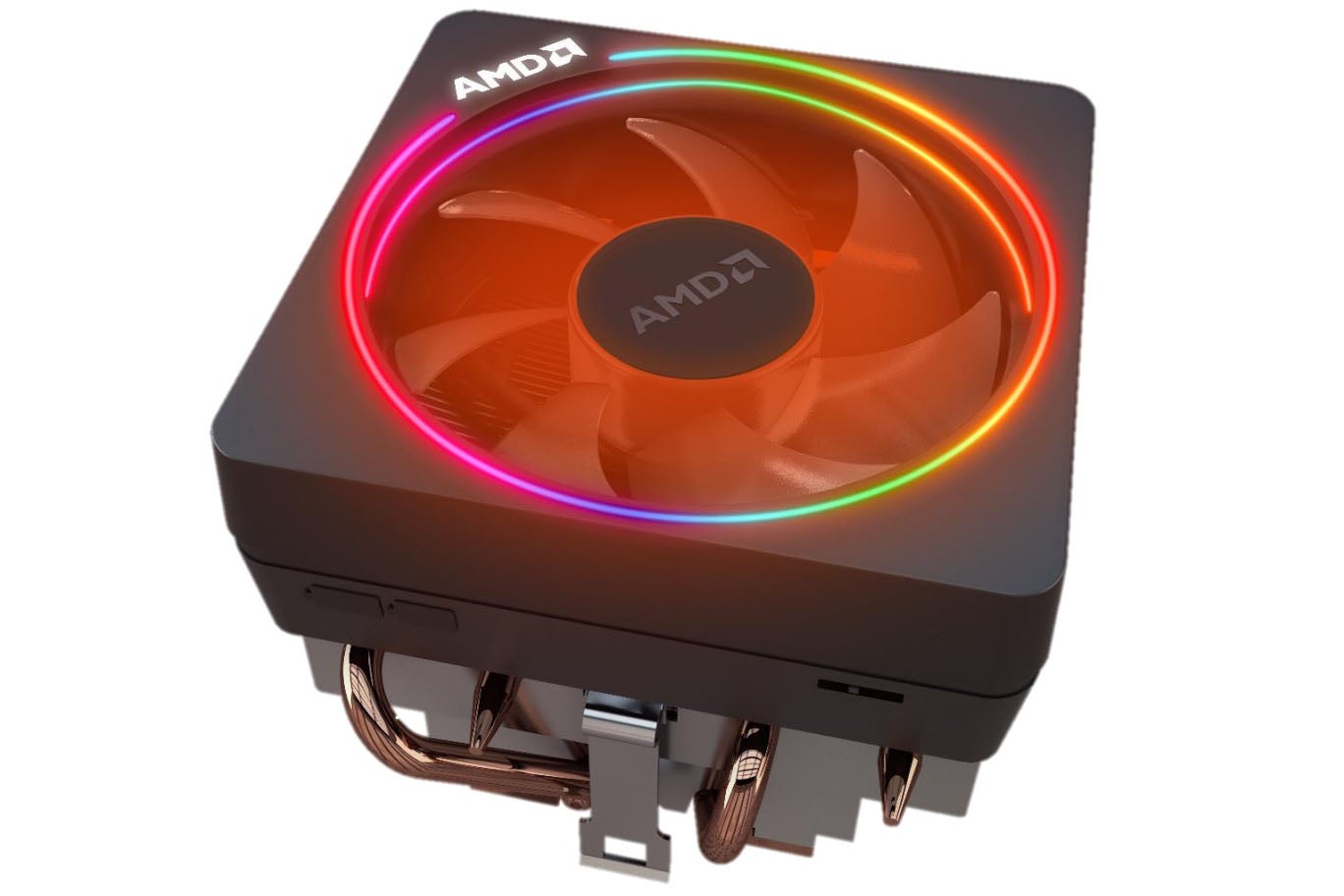 Perhaps because of this AMD has introduced a new cooler that will ship with the 2700X. AMD left consumers to buy their own coolers with the first-gen high-end Ryzen processors, but clearly it feels a value-adding extra is required this time around.

AMD isn’t messing around, either. The Wraith Prism is a fairly serious bit of kit compared to the coolers inlcuded with most CPUs. It has a hefty copper base and uses four heatpipes to draw heat up to a fine metal radiator. Atop this lot is a 90mm fan that includes RGB lighting, while on the side is a switch for alternating between high and low fan speed modes.

Perhaps the most exciting thing about the Ryzen 2 launch is that AMD has stuck to its promise of making its new chips backwards compatible with exiting AM4 motherboards. Almost.

The company has tested all existing X370 boards and they all support these new chips to their maximum. However, some B350 boards don’t quite meet the power requirements to run the higher TDP 2700X. The processor will continue to work, but clock speeds may automatically be reduced slightly to keep everything within the power delivery parameters of the board.

It makes for a slightly more confusing situation for customers, but overall it’s still a far preferable situation than having to buy a new motherboard – as has been the case with Intel’s last several CPU updates.

Meanwhile, one of the chief complaints of the original Ryzen processors was slightly iffy RAM support. The X370 chipset and the Ryzen processors could in theory support fast RAM, but compatibility and stability could be patchy. It improved over time as motherboard manufacturers updated BIOSes, but it wasn’t entirely eliminated.

This is where you maybe tempted to buy a new X470 motherboard. As well as out-of-the-box support for all the new CPUs, it brings official support for faster memory. Official supported speed for the first-generation chips was 2667MHz, but this has now increased to 2933MHz.

Moreover, general memory compatibility has improved. We tested six different memory kits of various speeds and all of them ran at their claimed speeds, with all the slower kits also readily overclocking to 3000MHz.

Performance improvements from using faster RAM are modest – as is the case with Intel systems, too, but it’s good to know support is there if you do want to squeeze every drop of performance out of your system.

Another benefit of X470 is the new StoreMI technology. This allows users to combine an SSD and hard drive into one virtual drive to make it easier to keep track of you files. It automatically optimises which files are best to store on the SSD for the best boot and app-loading times, yet can be turned on and off quickly and easily.