As an eight-core chip, the Ryzen 7 2700X could be considered a competitor to the Intel Core i7-7820X. However, that chip only runs on Intel’s high-end LGA2066 platform. Instead, it’s only really right to compare the top-of-the-line processor from AMD’s mainstream platform (AM4) to Intel’s top-of-the-line for its mainstream platform, LGA1151. This puts it up against the Intel Core i7-8700K.

It makes for a slightly lop-sided comparison, as Intel’s chip has fewer cores yet runs at a faster clock speed. Ultimately, though, it’s the main choice buyers will be looking to make.

Also, the new Ryzen 5 2600X is a direct, six-core competitor to the 8700K. Its slower clock speeds means it’s almost guaranteed to be a little slower across the board, but with the right pricing it could make for a great choice for gamers.

Kicking things off with the ever-reliable Cinebench R15 benchmark, we can see that the higher clock speed of the 2700X delivers a nice 11% improvement in the single-core test over the 1800X, while the multi-core test also shows a 10% improvement. The advantage of those eight cores compared to the six of the 8700K is also plain to see with a massive 28% lead in the multi-threaded test. 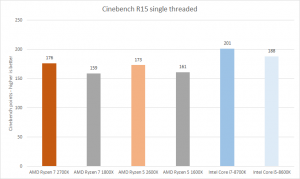 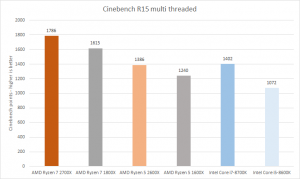 However, the clock speed advantage of the 8700K is also clear, with Intel’s chip holding a 14% lead in single-thread performance. Meanwhile, AMD’s six-core competitor – the 2600X – is another couple of percentage points behind, although Intel’s advantage in the multi-thread test is less than 1%. 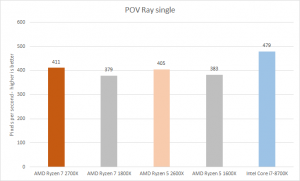 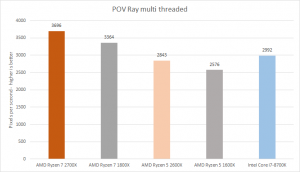 The clock speed deficit is unlikely to be noticeable in day-to-day use, since most apps don’t put that much strain on your CPU. Particularly demanding apps will have some sort of multi-threaded capability, which means the 2700X has an advantage.

However, there are a few instances where the clock speed advantage of the 8700K will shine through. For instance, video rendering using Adobe Photoshop is quite poorly optimised for multi-core processors, taking little advantage of more than four cores. As such, clock speed is king here.

Then, of course, there’s gaming. Most modern games have a degree of multi-thread capability, but only for ancillary tasks such as physics or audio calculations. The main core of the game that tends to determine the FPS you’ll get is always single-threaded, so clock speed is again king.

We can see this in our tests, although only at lower resolutions where the graphics card isn’t the major performance bottleneck. 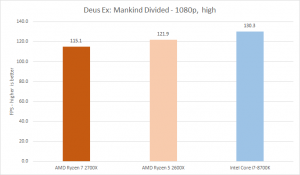 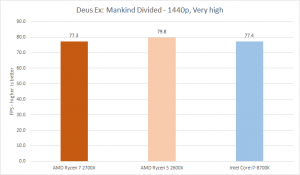 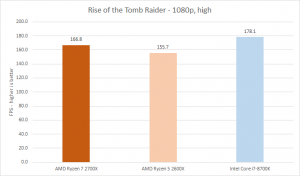 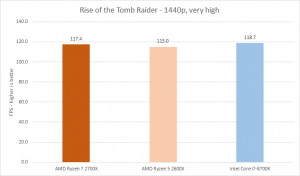 Following the release of the Intel Core i9-9900K we retested the Ryzen 2700X to see how it compared against modern competition. While the Ryzen 7 2700X lagged behind the i9-9900K for HD gaming, the gap was reduced to just one frame-per-second for 4K content. This is despite Intel’s 9th-Gen i9 CPU costing double the price. This goes to show that if you’re intent on playing games in Ultra HD, the Ryzen 7 2700X is easily one of the best value processors available.

One of the biggest factors to leave us impressed about the 1800X was that AMD had for a long time struggled to get power consumption down to a level that competed with Intel’s chips – but with that processor AMD achieved power consumption parity. 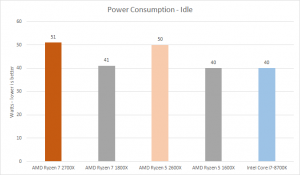 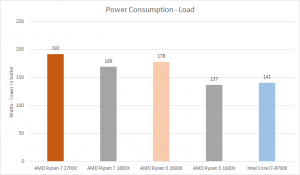 Now, we’re not testing directly comparable chips this time as the 2700X is eight-core and the 8700K is six-core, but it’s still interesting to note how much more power the AMD chip uses. Moreover, the 2600X uses quite a bit more power than the Intel chip, despite them both being six-core.

The first generation of Ryzen processors weren’t great for overclocking. They could be pushed hnigher, but often required quite a high voltage and consumed considerably more power.

However, AMD is bullish about how overclockable its new processors are, and there have been widespread rumours of processors hitting well over 5GHz in extreme conditions.

In our trials, we didn’t find progress to be all that straightforward. It certainly doesn’t help that the default starting voltage – whether you use the BIOS or AMD Ryzen software – is 1.2V, when you actually need at least 1.45 to start pushing the CPU beyond its default speeds.

Also, as before, any overclocking immediately disables all the automatic clock speed tweaks of Precision Boost and XFR, so unless you can overclock all eight cores to beyond 4.3GHz, your single core performance will likely go down.

Sure enough, in our tests, we struggled to get the 2700X much higher than 4.3GHz without pushing the CPU voltage up particularly high. In this regard the Ryzen 5 2600X is the more appealing option as it also reached 4.3GHz, which is actually beyond its default single-core clock speed.

In contrast, the 8700K we used for testing immediately overclocked to 5GHz without changing any settings other than the CPU multiplier, though notably this also resulted in a big jump in power consumption. It leapt from 141W to 218W when the CPU is fully loaded.

We also tested the Wraith cooler and it performed impressively. It kept the CPU at just 71C when under full load, while only producing 41dB (from 30cm away, not in a case). Our monstrous NZXT Kraken X62 all-in-one liquid cooler only had the CPU 6C cooler, though notably it was all but silent.

We also compared Cinebench results for both coolers to see if the new XFR2 overclocking held back performance for the Wraith cooler at all, but in fact it produced exactly the same average score. 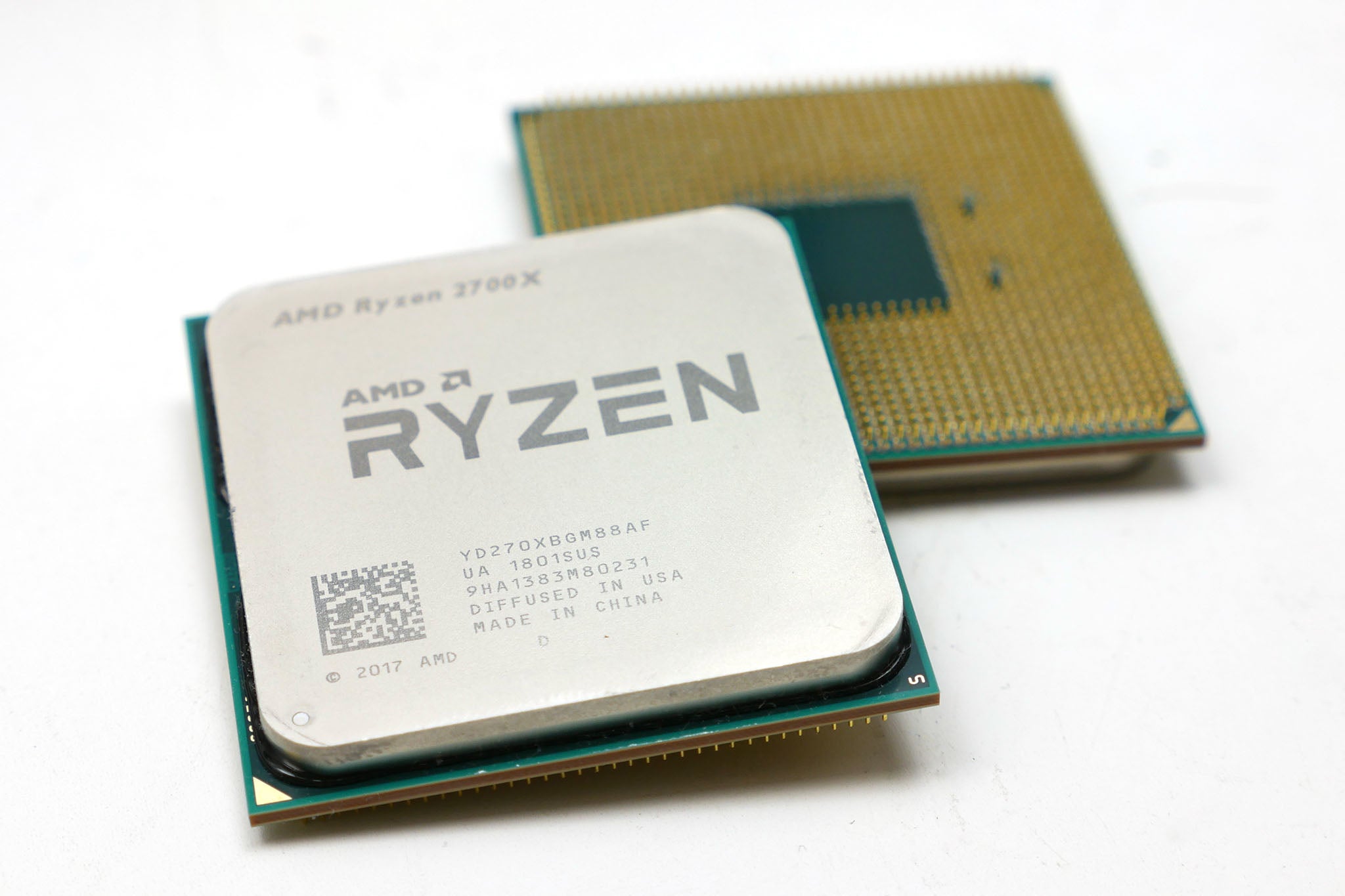 In some ways, the 2700X and 2600X are everything we’d hope for from a second-generation Ryzen processor. They’re a little faster than the first generation, they fit into existing AM4 motherboards, and they’re priced just as competitively.

If you bought, say, a Ryzen 5 1500X last year and are looking for an upgrade then these fit the bill perfectly. On the other hand, if you bought an 1800X, or even a 1700X, then the case is less clear-cut. Those older chips can be overclocked to somewhat comparable levels, so you’ll likely only see a modest performance gain.

Meanwhile, when it comes to choosing one of these processors or one of Intel’s latest, the reality is that for most users – and particularly gamers – six faster cores are more often more useful than eight slower ones, so the 8700K will be the better choice.

Unless, that is, you opt for the 2600X. It has comparable performance across the board but has a far more competitive price, making it the clear choice for those on a slightly tighter budget.

The new Ryzen 2 processors aren’t quite the revelation of the first-generation chips – but faster clock speeds, greater overclockability, AM4 motherboard compatibility and competitive pricing make them well worth a look.