What is AMD Ryzen 3?

AMD’s range of Ryzen processors have proved game-changing, but there’s no denying that the excellent Ryzen 7 parts can be a tad expensive. This isn’t the case with Ryzen 3. The red team’s latest chips are more affordable than their predecessors – and also far cheaper than Intel’s competition.

The new Ryzen 3 processors still pack in most of the features of the Zen architecture, despite their lower price.

They deliver a huge boost to the number of instructions in each clock cycle in a bid to claw back Intel’s long-standing lead in this department, as well as introducing Precision Boost – AMD’s new equivalent to Turbo Boost – which allows these new chips to dynamically overclock when thermal conditions allow.

Ryzen also features Extended Frequency Range, or XFR. This allows Ryzen CPUs to provide an extra boost to a single core. X-suffix chips can improve a single core by 100MHz, while processors without that branding receive a 50MHz bump. 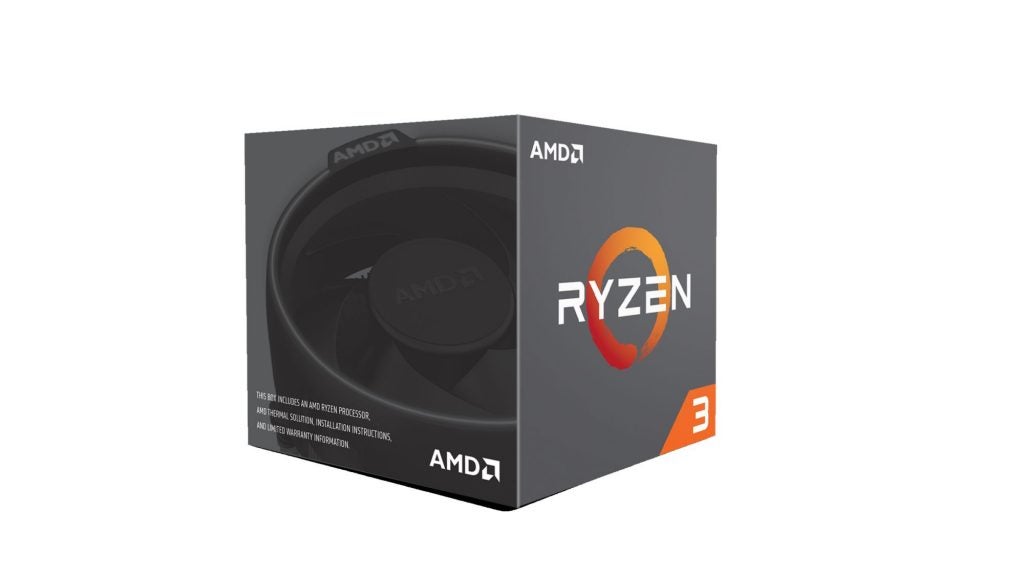 The Zen architecture also delivers a significant improvement to efficiency – an area where AMD’s previous-gen processors have fallen behind. Compare the past generation FX-8150 and the Ryzen 7 1800X: the former has a huge TDP of 125W, while the latter sits at just 95W.

All Ryzen chips have unlocked multipliers, but the Ryzen 3 chips on review here don’t have simultaneous multi-threading – something that Intel has also removed from its low-end parts. That means each core can only address a single task, rather than two. Still, given Ryzen 3 comes with four cores as standard, that puts it in the same category as Intel’s more expensive desktop Core i5 chips.

The top Ryzen 3 chip is the 1300X. It costs £125/$129, and it’s a quad-core processor without multi-threading; it’s clocked to 3.5GHz with a 3.7GHz Turbo peak. Its base speed is comparable with other Ryzen parts, although the Turbo speed feels a little unambitious.

The top Ryzen 3 chip retains the X suffix, which means it wields the full 100MHz boost available across one of its cores.

Elsewhere, the 1300X has 8MB of L3 cache, which is half as much as most other Ryzen chips, and its TDP of 65W matches most Ryzen 5 chips.

AMD is also releasing the Ryzen 3 1200. This part costs just £105/$105, and has four cores and 8MB of L3 cache. Their stock and Turbo speeds of 3.1GHz and 3.4GHz are more modest, however, and this isn’t an X-branded part – so it only gets a reduced version of XFR that delivers a 50MHz boost on one core.

The Ryzen parts look tempting when stacked up against Intel’s competition. The Core i3-7350K is a Kaby Lake part and is unlocked for overclocking, plus it has a 4.2GHz stock speed – but it has no Turbo ability, and the same 8MB of L3 cache.

The Core i3 part has integrated graphics, which Ryzen doesn’t, but it has only two cores and no Hyper-Threading. It’s expensive, too, costing £170.

The new Ryzen chips use AMD’s AM4 platform. This new platform supports dual-channel DDR4 memory and uses the new AM4 socket, so you’ll probably need a new CPU cooler – especially if you want to overclock a Ryzen processor.

The AM4 platform is supported by five new chipsets. The top-tier silicon is the X370, which offers the best support for PCI lanes, SATA connectivity and USB ports. It’s also the only AM4 chipset to support both AMD CrossFire and Nvidia SLI. 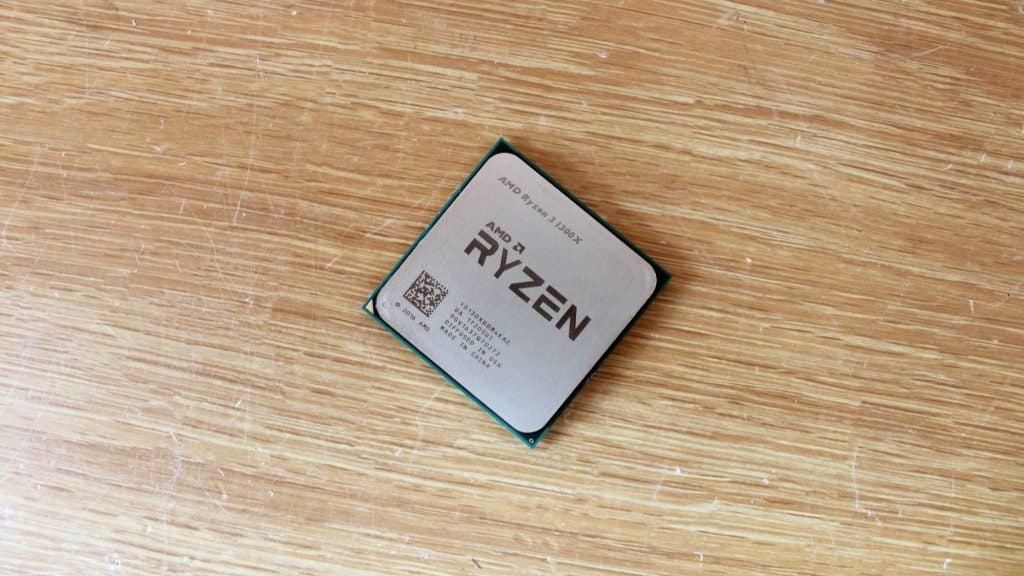 The B350 chipset is next in the range, and it supports just CrossFire. Those two chipsets are also the only two AM4 parts to support overclocking.

The A320, X300 and A/B300 chipsets are designed for entry-level and small-form-factor PCs, which means no multi-GPU support and a reduced number of PCI lanes, SATA ports and USB connections.

That said, always check what a motherboard is offering, because most manufacturers supplement their chosen chipsets with third-party hardware to add more connectivity – such as extra SATA ports or M.2 sockets, or better audio.

Related: AMD Ryzen: Everything you need to know

The Ryzen 3 1300X has a lesser single-core speed than Intel’s Core i3-7350K, but double the number of cores, and as such I expected the two chips to trade blows in application benchmarks – with Intel being better in single-threaded tasks, and AMD taking plaudits in tougher tests.

Note: There are cheaper processors closer to the price of the Ryzen 3 line-up, including non-overclockable Core i3s and new dual-core, four-thread Pentium chips, most if not all with higher single-core clock speeds than the Ryzen 3s. At the time of testing we could only obtain the Core i3 referred to here.

My suspicions were proved correct in Cinebench. The 1300X scored 150cb in the single-core test, which was 27 points behind the Intel Core i3 chip, but the Ryzen’s multi-core score of 551cb was around 100 points better than the Intel silicon. Impressively, it’s about half-way between the Core i3 chip and the Core i5-7600K, even though the 1300X costs only £125. 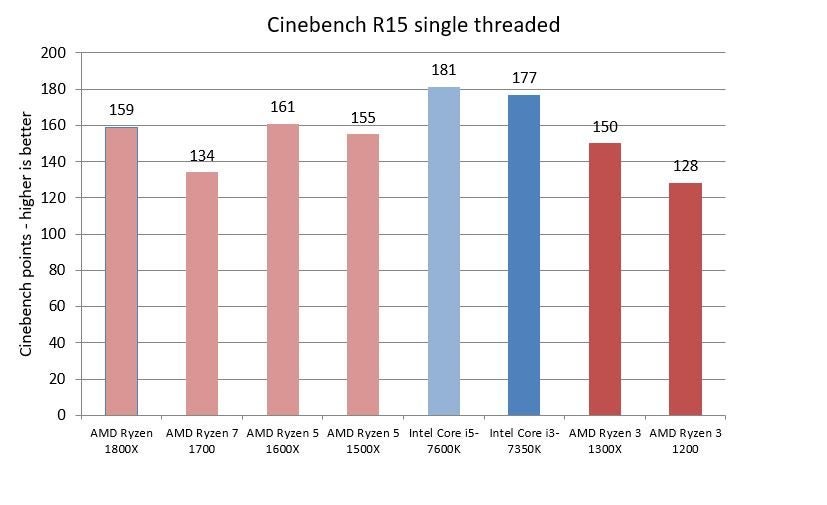 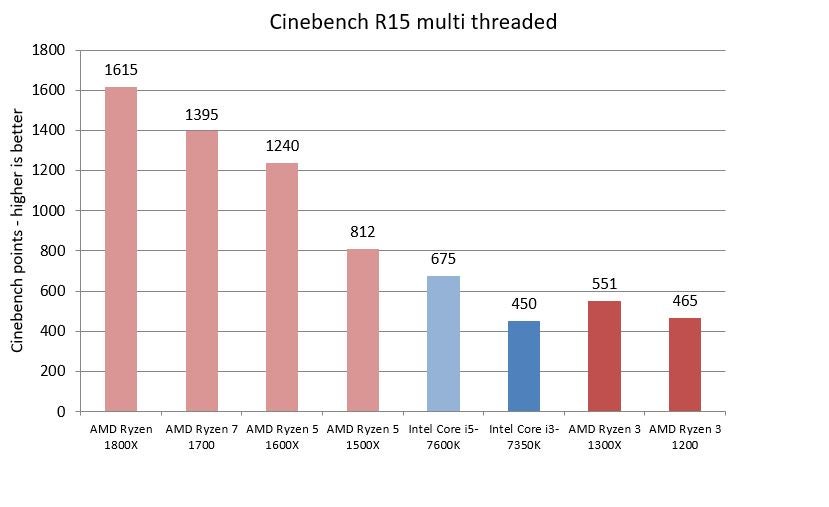 The cheaper Ryzen 3 part impressed, too. Its 128cb result in the single-core test is middling, but its 465cb score in the multi-core benchmark managed to beat the Core i3.

That pattern was repeated in POV-Ray 3.7, another benchmark featuring single- and multi-core variants.

The two Ryzen chips scored 366 pixels-per-second (PPS) and 323PPS in the single-core test, which is behind the 436PPS result from the Core i3 chip. However, in the multi-threaded benchmark the 1300X and 1200 scored 1199PPS and 1139PPS respectively – while the Intel chip scored only 981PPS . 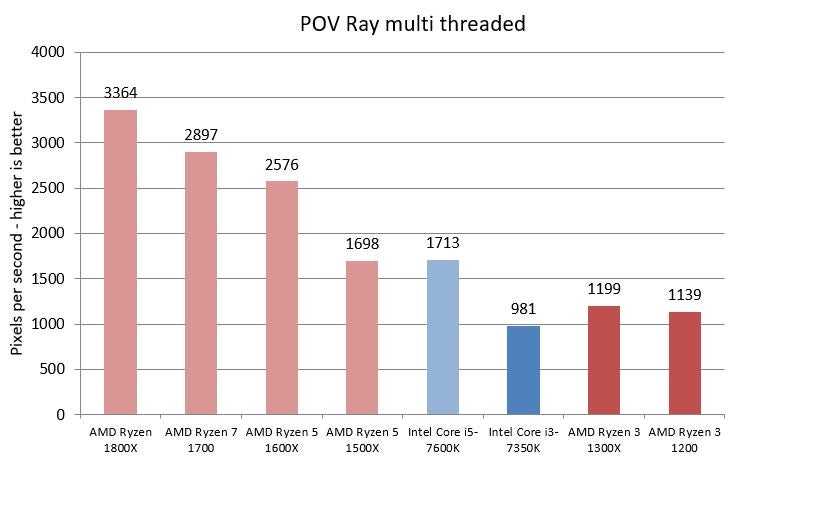 AMD’s silicon continued to impress in Handbrake, where a lower result is better. The two AMD chips encoding the sample clip in 155 seconds and 184 seconds, but the Core i3 processor took 194 seconds to complete the same task.

Ryzen 3 is hardly a slouch in applications, then, but there are clear differences between AMD’s new hardware and Intel’s rival. Kaby Lake remains better in single-threaded tasks, but both Ryzen chips are superior with multi-threaded applications, which bodes well for multi-tasking and tougher work tools.

At 1080p, medium settings, the AMD hardware was usually a little slower than Intel’s chip. 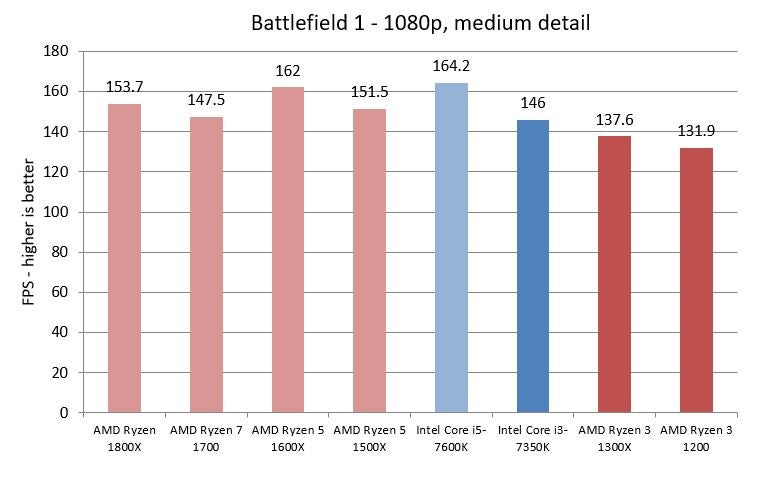 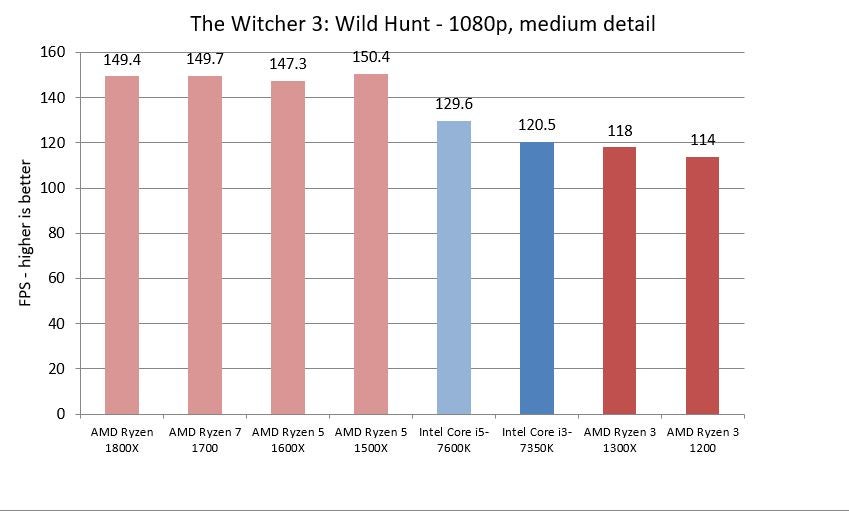 The tables  turned when I increased the resolution to 2560 x 1440 and the quality levels to Ultra. In this test, the Ryzen 1300X scored 51fps in Witcher 3 and 88fps in Battlefield 1, with the Intel chip falling one and three frames behind.

The Ryzen 3 1200 also drew level with the Core i3 in those trickier gaming tests. 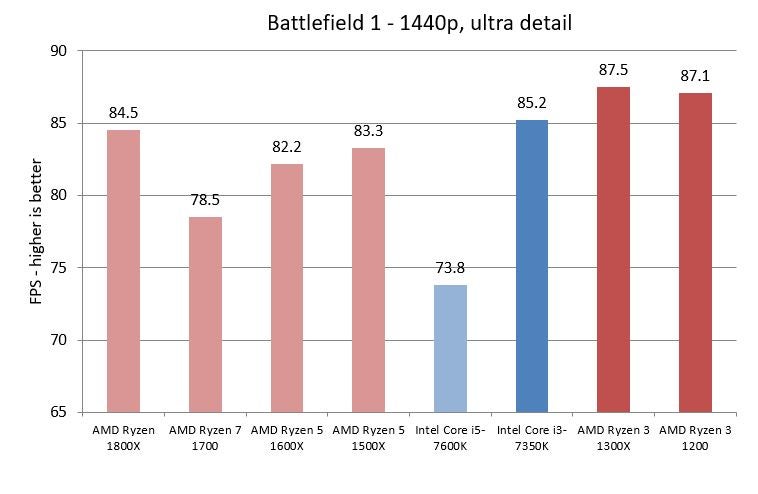 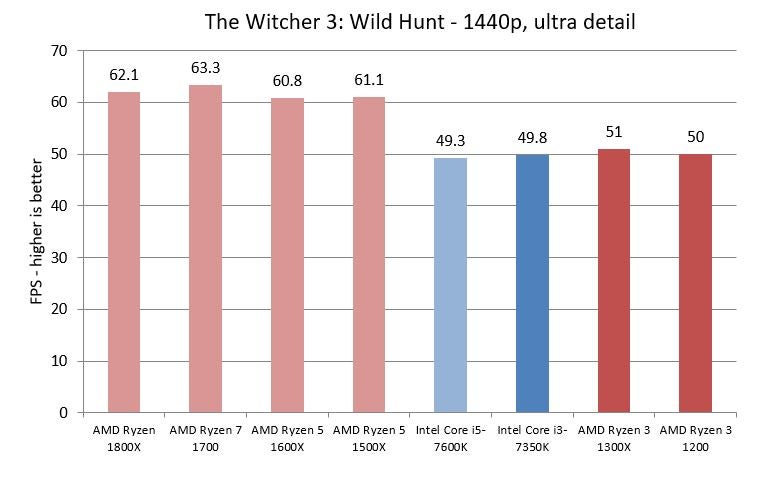 It’s little surprise that the Ryzen chips are better when tasked with trickier scenarios – those higher resolutions and quality levels will demand more processing power, and the Ryzen 3’s four-core design clearly beats Intel in other such intensive scenarios.

Ashes of the Singularity is the third games test, and it’s very CPU intensive.

In the game’s low-intensity 1080p test, the AMD chips hovered at 53fps or below while the Core i3 averaged 58fps. At Crazy settings and 1440p, the Ryzen chips were a couple of frames behind – but the gap more pronounced on taking the CPU offset into consideration. 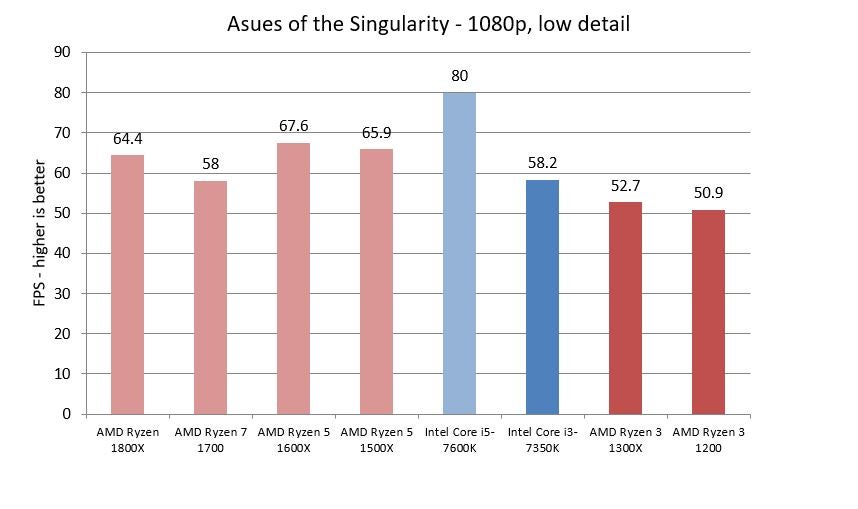 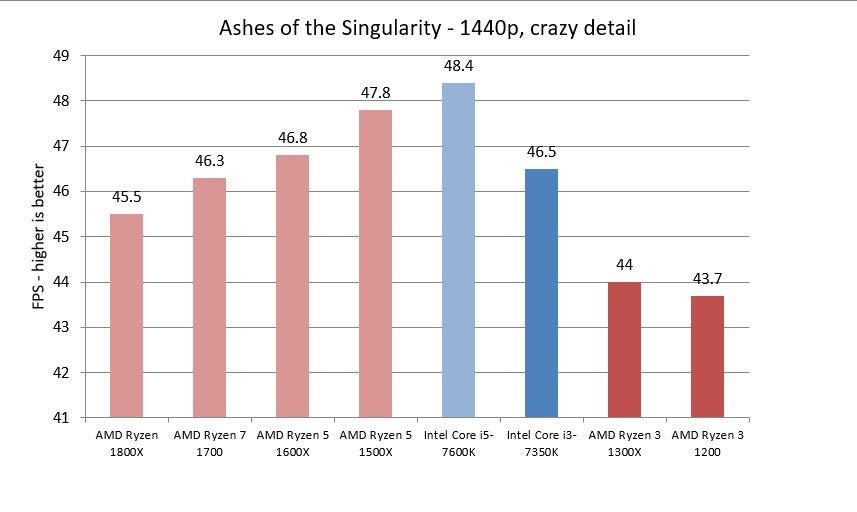 Those Ashes of the Singularity results swing in Intel’s favour, with the Core i3 chip remaining better with less demanding games – but, as with applications, the Ryzen 3 chips excel when tasked with tougher titles. With better results at higher frame rates and improved quality settings, I’d say Ryzen is the superior option when it comes to gaming – it’s great now and it will be better in the future.

The only exception will be simpler eSports titles, where out-and-out clock speed will result in better performance in games that truly benefit from ludicrous frame rates.

The Ryzen 3 1300X and 1200 both managed idle power draws of 67W, which was only three watts more than the Core i3 part required.

Ryzen’s reduced power consumption was paired with better thermal performance. There wasn’t much to choose between the AMD and Intel parts when idling, but the 1300X’s peak temperature of 48°C was five degrees better than the Core i3 – and the Ryzen 3 1200 topped out at a cool 41°C.

Every AMD Ryzen chip is unlocked for overclocking, and AMD’s Ryzen Master tool allows for tweaking in Windows, so it’s easier than ever to get some extra grunt from a new chip.

I was able to improve the Ryzen 3 1300X from its stock speed of 3.5GHz to 4.1GHz, although I had to run a hefty 1.475V through the chip to get the CPU running stably with that revised clock.

That’s about as much electricity as I’d like to pump through this chip, though, and it didn’t deliver a huge boost to performance – the 1300X’s Cinebench scores only jumped from 150cb and 551cb to 158cb and 571cb with the tweak applied.

The 1300X consumed and extra 8W when overclocked, too, and heat will increase – although this will depend on your cooler. Sadly, this isn’t enough of a boost to get us excited.

The 1200 required an extra 11W, but it delivered more than its pricier stablemate.

Those are reasonable results for low-end chips but, as ever, Intel’s chip is competitive. The Core i3-7350K can regularly reach 5GHz in overclocks, which means it will be even further ahead of the AMD chips in single-threaded tasks.

Should I Buy AMD Ryzen 3?

The pricier Ryzen 3 1300X is still far cheaper than the Intel chip, and it’s more impressive; it’s comfortably quicker in multi-threaded scenarios, and closer to the Core i3 in single-threaded applications.

Both chips competed well with Intel in thermal tests and power consumption, and both performed well in games, too: they weren’t a hindrance at 1080p, and at 1440p and with higher graphics settings both Ryzen chips outpaced the Core i3 CPU.

That’s the crux of it, really. Intel’s chip is better in single-threaded tasks and less-demanding scenarios, while the Ryzen CPUs are more adept with multi-tasking and tougher games – and that means they’ll be more versatile and have a longer shelf-life. Crucially, they’re both cheaper, too.

As far as I’m concerned, AMD’s new Ryzen chips are superb choices – more capable than Intel and more affordable too. If you’re building an affordable performance PC, Ryzen 3 should be at the top of your CPU shortlist.