The AMD Ryzen 7 1800X is the top-of-the-line processor from AMD’s new Ryzen range of CPUs that’s launching today. Boasting eight cores, it’s a monster chip that’s designed to power through the heaviest of workloads – and take on the likes of the Intel Core i7-6900K.

AMD releasing a CPU isn’t new, but this time round the company has delivered on its promises by way of a leap in performance and power efficiency. As a result, the AMD Ryzen 1800X and the rest of the AMD Ryzen lineup bring true competition to the CPU market for the first time in a decade.

Not that the 1800X comes cheap. It will set you back £500, while the cheapest Ryzen 7 processor launching today costs £330. However, it undercuts the competition from Intel by a significant margin, and suggests bargains await when the rest of the AMD Ryzen range launches later in the year. 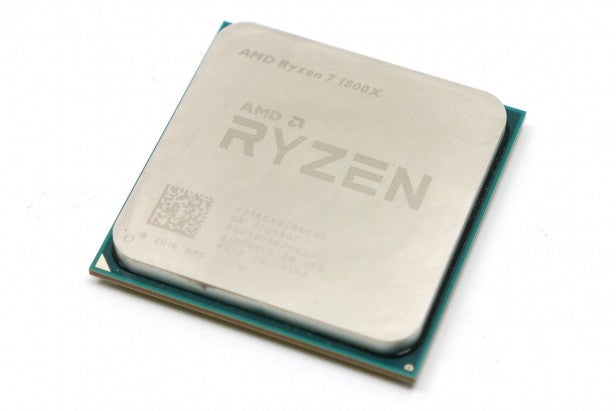 To recap, Ryzen is the new brand name for AMD’s fresh line of CPUs. It’s akin to Intel’s Core branding and either replaces or sits alongside AMD’s older Athlon and FX models. Since these are CPUs only, with no built-in GPU, they sit apart from the company’s A-series APUs.

Like the older brands Ryzen will cover a wide range of CPUs, running from the top-of-the-line Ryzen 7 chips that have just launched, down through Ryzen 5 and Ryzen 3, which will be arriving later in the year. If you’re just into gaming and won’t be embarking on big video editing projects, it’s probably worth waiting for those to launch instead.

All the Ryzen chips will be based on the company’s completely new CPU micro-architecture – the underlying design that makes up the chips – known as Zen. This is a significant change from previous AMD designs and it brings with it huge leaps in power efficiency and raw performance.

The biggest development is that the number of instructions per clock – the calculations for each tick of the CPU’s internal many-GHz clock – that Zen is capable of has leapt 40% over previous AMD designs. 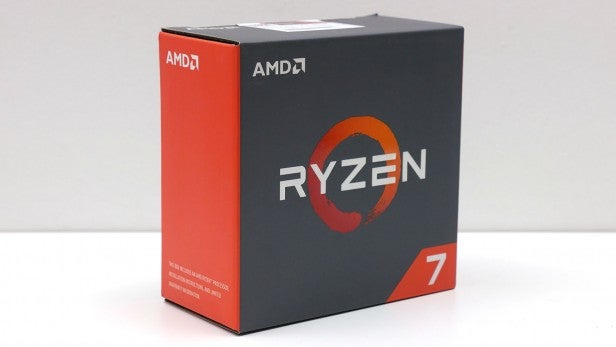 Zen also brings support for simultaneous multi-threading for the first time. This is where each core of the chip can deal with two threads at once, making it appear to your software that it’s a dual-core, or in the case of these Ryzen 7 chips, 16-core chip. It’s analogous to Intel’s Hyper-Threading technology.

Along with these improvements, Zen is also far more power efficient than before, thanks in part to more granular control of the processor’s speed and voltage; it’s able to ramp up and down far faster than before. The technology for managing this is called SenseMI.

Also crucial is the move to a new 14 nanometre (nm) FinFET manufacturing process. This brings AMD in line with Intel’s current lineup of CPUs – the Kaby Lake range – that also use a different but equally small 14nm technology.

The general rule is that the smaller the manufacturing technique, the greater power efficiency and the lower the price of manufacture; generally, this is in area where Intel has led over AMD.

This time round, however, Intel hasn’t been able to keep up its usual pace of development, allowing AMD to catch up.

What’s more, this doesn’t look set to change any time soon. Kaby Lake only just launched, and Intel’s smaller 10nm technology isn’t expected to arrive until well into 2018, with the Cannonlake range of processors.

Other features to arrive with Zen and Ryzen include support for DDR4 and a new auto-overclocking feature called XFR (eXtended Frequency Range). Like Intel, AMD’s chips have a base clock frequency and a boost clock frequency that allow the chip to ramp up and down in response to the workload. XFR is the last bit of auto-overclocking that can be applied to a single core, if the processor isn’t too hot. It can apply up to 100MHz on top of the boost clock speed on X chips and up to 50MHz for non-X chips. This should mean the processor is always working to very near its maximum capability.

There are just three Ryzen chips launching today: the Ryzen 7 1800X, the Ryzen 7 1700X and the Ryzen 7 1700. These are set to be the top three chips that will be available for the foreseeable future. However, cheaper chips will be making an appearance later in the year.

All three are 8-core/16-thread chips, which are also multiplier unlocked for easy overclocking. This is great, but it rather begs the question of what differentiates the three and what defines the numbering/naming system AMD has used. So let’s break it down.

The easy bit is the first number. Just like Intel has Core i7, i5 and i3 to denote a general overarching summary of the performance level of the chip, so is the case with Ryzen. Ryzen 7 is “prosumer”, Ryzen 5 is high-end consumer and Ryzen 3 is mainstream.

Next is the second number, which is split into three parts. Like Intel, the first digit is the generation of the chip, so all the new Ryzen chips will start with a 1.

Finally, at the end is an optional letter (normal processors don’t get a letter) An X denotes the extra XFR speed bump, plus there are various other options for low-power and mobile variants.

It seems logical enough, but when applied to the three chips launching today, it isn’t exactly clear. All three chips are essentially identical except for clock speed and XFR, but the numbering system seems to suggest they have different features.

In contrast, if you’re familiar with Intel’s labelling scheme then you can look at the name of a chip and pretty much determine its features and roughly the speed of which it’s capable. This isn’t the case with AMD’s system.

Meanwhile, the 7700K is only a quad-core chip going up against the eight-core 1700, which again suggests a possible big win for AMD. However, the 7700K is clocked considerably faster, and so will have the edge in single-threaded applications; it will be interesting to see how it performs.

Launching alongside Ryzen is the AM4 platform and five new chipsets. This will mean buyers have to get both a new motherboard and CPU if they want to invest in a Ryzen processor. However, AMD has committed to continuing to support AM4 for future CPUs, so you won’t have to upgrade your motherboard again too soon.

Moreover, AMD is using a single-socket and motherboard platform for its full range of CPUs. So even though there are no cheap CPUs available yet, when lower-priced Ryzen chips eventually launch, you’ll be able to buy a cheap motherboard and quad-core processor and still have the option of later upgrading all the way to the top-of-the-line eight-core chips.

In contrast, Intel requires you to jump to an expensive X99 motherboard to gain access to any of its processors with more than four cores.

That said, Intel still has an advantage when it comes to the raw power of its chipsets. The X99 chipset has a whopping 40 PCI-E lanes, allowing for huge multi-graphics card configurations and storage arrays. The current top AM4 chipset – the X370 – has just 20. This remains enough for a single x16 graphics card and x4 PCI-E SSD, but for truly extreme performance Intel still has an edge. 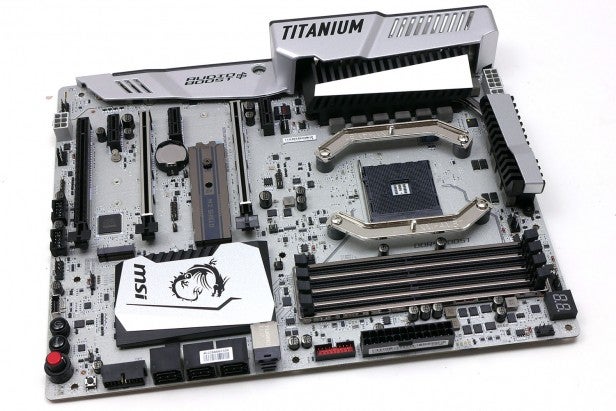 Otherwise, AMD’s new chipsets are essentially just playing catch-up. You get DDR4 support, USB 3.1, PCI-E 3.0 and all the usual SATA ports and other connectivity options you’d expect. Both the X370 and B250 chipsets will also support overclocking, but only X370 will be able to handle multiple graphics cards. Meanwhile, the A320 chipset drops overclocking support.

The X300 and A300 chipsets are meant for small-form-factor systems, and they take an interesting approach. They’re essentially nothing more than a PCI-E interface to the CPU, with all other I/O and features left to motherboard manufacturers. This makes the chips tiny, in turn making them very low power and leaving plenty of room for motherboard manufacturers to optimise their board designs to fit the features they want.

AM4 uses a new cooler-mounting system. As a result, three new CPU coolers will be launching alongside Ryzen – although AMD freely admits that it expects users to buy alternatives. Indeed, the 1800X won’t be available at all with a cooler included. The new cooler-mounting system will mean that, depending on how existing coolers affix to the motherboard, many existing coolers won’t fit. Many will work with small tweaks, though.

Next
Performance, Gaming and Overclocking Review