The Radeon RX 460 is AMD’s cheapest current-generation graphics card, with cards shipping for a spectacular sub-£90. It’s made for Full HD eSports games and low-end AAA gaming. But the focus here is with the games that need only modest amounts of processing power and a small helping of video memory.

The card on test, provided by AMD, is the 2GB XFX Double Dissipation Edition, which retails for around £104 at the time of review. Note that this probably isn’t the version we’d recommend; there are far more compact cards available for £90 that will provide very similar performance.

The RX 460 is also available in 4GB models, although this strikes me as something of a false economy given the sort of games the RX 460 is aimed at. It’s the 2GB model at the bottom end of the RX 460’s price range that makes the most sense.

The RX 460 runs on AMD’s Polaris architecture, which is also found on the more expensive RX 470 and RX 480 cards. Polaris competes against Nvidia’s Pascal architecture but is substantially less efficient, which can be seen by the power consumption differences across the range. 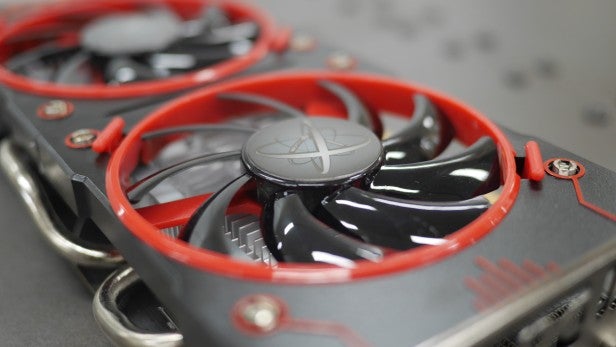 Still, it’s AMD’s most efficient architecture at the time of writing, running on a 14nm (nanometre) architecture with a 1,220MHz boost clock and 896 stream processors.

You get a single DisplayPort 1.4, HDMI 2.0b port and DVI-D port on this model, along with 2GB of GDDR5 memory running at 7GHz. 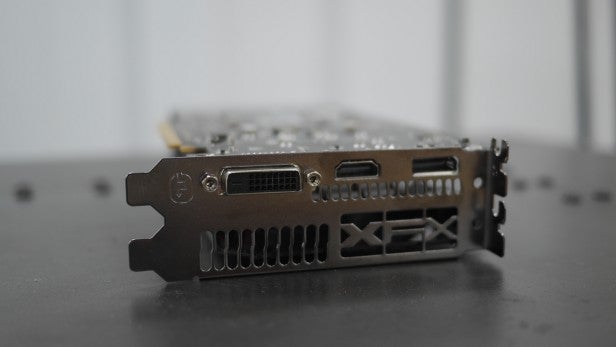 This model uses two fairly large fans to keep cool, limiting the noise somewhat. It isn’t really a looker though, showing its budget origins by way of the glossy plastic and unsubtle red highlights.

I benchmarked the RX 460 in our usual test rig that includes the following components.

At this stage I should point out that the test rig is probably more highly specified than the sort of PC for which the RX 460 is made. The mid-range to high-end  components here are rather at odds with the RX 460’s budget pricing, and this GPU would make far more sense in a cheaper and more compact system. The benchmark results below are a best-case scenario.

I ditched TrustedReviews‘ usual suite of benchmarks here and focused instead on the types of games for which the RX 460 is designed. I swapped out Tomb Raider and GTA V for Overwatch and CounterStrike: Global Offensive (CS:GO), although I kept both Hitman and Middle-earth: Shadow of Mordor to discover the capability of this card when playing AAA games at Medium settings.

These are the same benchmarks on which I ran the competing Nvidia GeForce GTX 1050.

CS:GO is the easiest benchmark of this set, offering up frame rates in excess of 200fps. I tested it at High presets in Full HD but without VSync for the snappiest, lag-free play you can achieve on a high-refresh-rate monitor. 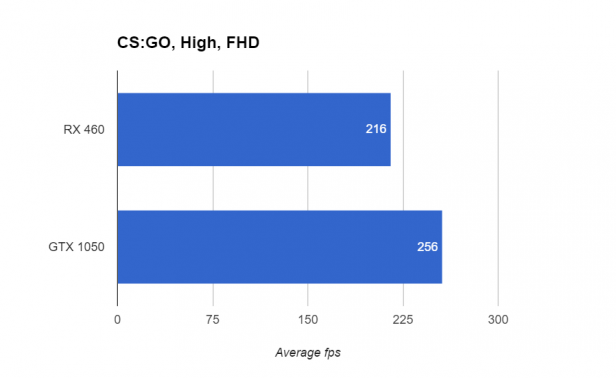 The RX 460 scored an average frame rate of 216fps in the test, which is obviously more than playable and makes the most out of nearly every single high-refresh-rate monitor on the market.

Overwatch is part of the latest generation of eSports titles, with a mix of fast-paced gameplay and stylised but high-fidelity graphics. Again, I ran this at Full HD and High presets to see what the RX 460 is capable of. 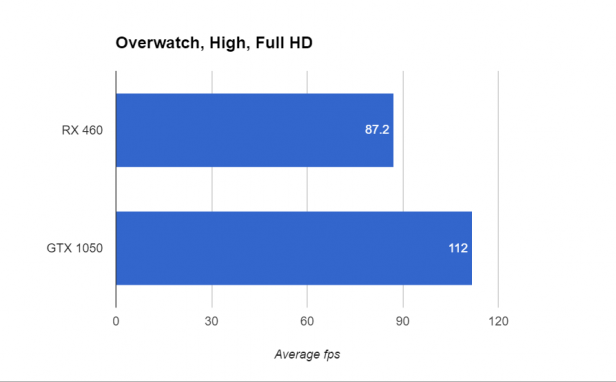 At Overwatch’s default settings for the RX 460 – a mix of Medium and Low – the RX 460 managed 116fps. To keep things equal, I normalised the settings to match the GTX 1050 so both could be compared, like-for-like. Here, AMD’s GPU managed 87.2fps, which is once again very playable.

Hitman is a AAA title that can prove challenging for graphics cards. Indeed, I had to override the game’s memory settings in order to turn everything up to Medium with 2x anti-aliasing. While it isn’t what the RX 460 was made for, it’s worth looking at in case you fancy a break from your RPGs and online FPS titles. 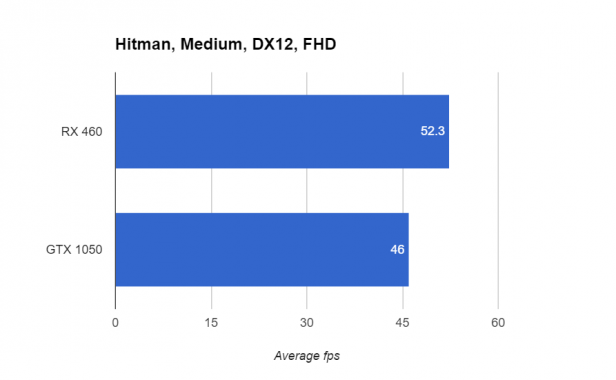 Hitman typically favours AMD cards, and since I ran the test in DirectX 12 mode, the RX 460 happily beat the rival GTX 1050 here with a score of 52.3fps.

Less challenging than Hitman, the Shadow of Mordor benchmark is a useful way to see how a GPU handles explosion and weather effects in a recent AAA title. I ran this test at Full HD on Medium presets. 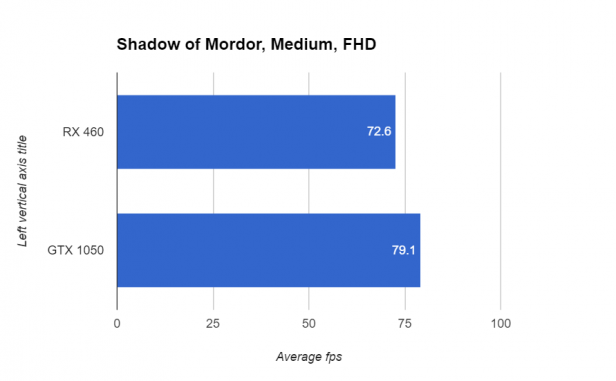 In this final test the RX 460 put in a great result, managing 72.6fps. The GTX 1050 achieved a result that was 9% faster, but this is still a very playable result at these settings.

In an unexpected result, the GTX 1050 beat the RX 460 with a score (3,281) that was 28% better than the RX 460. While this is an artificial benchmark that doesn’t have a huge amount of real-world relevance, it’s interesting to note the difference between the two cards when the going gets really tough.

If the best thing about the RX 460 is its low price, the worst is its power consumption. With a 150W TDP (thermal design power), it’s about as hungry as an RX 470 and has a figure that’s double the GTX 1050 and GTX 1050 Ti. This really limits its usefulness as an upgrade from a much older GPU in a budget system, since it might need more power cables than your system has. 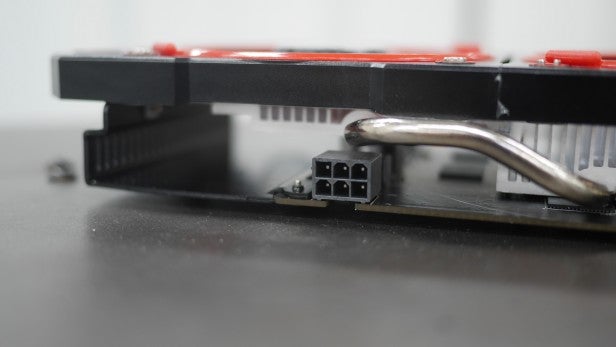 What’s more, this power consumption will affect the whole range. So RX 460s will universally be more power-thirsty than more powerful GTX 1050s. This, for me, is what gives the the GTX 1050 the edge.

When bought for £90, the RX 460 is actually pretty good value, coming in a full £20 cheaper than the lowest-priced GTX 1050s. However, the unit on test here represents part of the range that’s more expensive, and is priced almost equally to the GTX 1050. 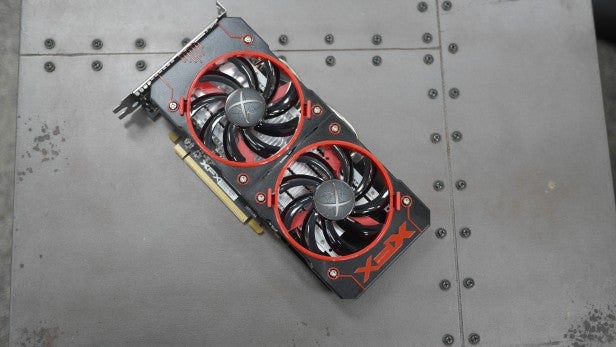 Personally, I wouldn’t recommend a 4GB model since this is beyond what most low-end titles will need – although if the price difference is marginal, then you might as well.

Cheap and cheerful – but power-hungry.