The RX 480 represented a massive shift in the world of VR gaming, managing to become the cheapest graphics card that reaches the Recommended specification for Oculus Rift and HTC Vive.

However, since our original review, the market has changed somewhat. We’ve seen the arrival of the Nvidia GeForce GTX 1060 and the AMD Radeon RX 470, which closely match the RX 480 in terms of performance and price.

What hasn’t changed is its performance: this is a stonking Full HD and 1440p card for around £215.

Below is our original review:

AMD has moved from its GCN (Graphics Core Next) 3 architecture to GCN 4, codenamed Polaris. It’s a fairly big shift in terms of the chip’s physical design. Gone is the 28-nanometer process used in the previous generation, to be replaced by a 14nm process. This allows for a greater number of transistors on any given piece of silicon, but without resulting in an increase in power consumption and heat.

The 14nm process is more dense than the 16nm process of Nvidia’s Pascal architecture, used in the GTX 1070 and 1080, but since AMD hasn’t yet launched a GPU to rival either of these cards, direct comparisons on the effectiveness of this denser arrangement remains to be seen.

Still, it means AMD has been able to pack a huge amount of power into a GPU that will suit many smaller budgets.

It’s important to temper your expectations, though. This is firmly a mid-range graphics card, so any fancy new technologies are unlikely to be found here. Instead, specs-wise, the RX 480 is merely solid; not extraordinary. There are 36 compute units and 2,304 stream processors running at a base clock speed of 1,120MHz and a boost speed of 1,266MHz.

It’s capable of up to 5.8TFLOPs (trillion floating-point operations per second), which puts it very much ahead of the Nvidia GeForce GTX 970, its closest rival at this price. However, TFLOPs figures don’t reveal the whole story and, as you’ll see from the benchmarks, a greater number of TFLOPs doesn’t equal superior performance. 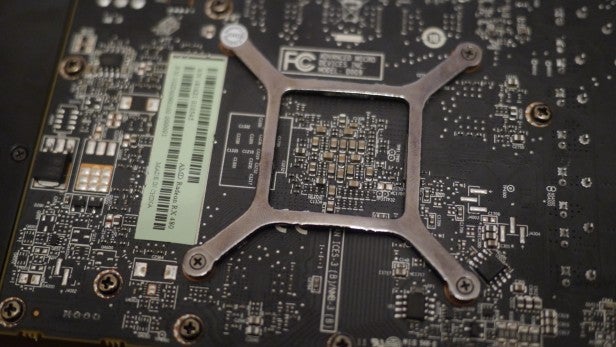 The RX 480 is supported by GDDR5 memory, with some cards including 4GB and others getting 8GB. 4GB models cost £185, while 8GB units will be £215. The differences don’t end here: 4GB units will have memory capable of 7Gbps (gigabits per second) speeds, while 8GB will have up to 8Gbps.

Third-party manufacturers might choose a different GDDR5 specification in order to save money, but AMD guarantees that no card will ship with a throughput that’s less than 7Gbps. It’s perhaps a little confusing, but isn’t a cause of worry; pricing and specs sheets will make it fairly clear what you’re buying.

We were supplied with an 8GB, 8Gbps card, and as a result can’t comment on the performance of the lower-specification models with any firm numbers.

The RX 480 also features asynchronous computing, meaning developers can assign tasks to the GPU with differing levels of priority, but have them all undertaken at the same time. This results in less stutter in games running in the latest DirectX 12 framework.

There isn’t anything particularly notable about the RX 480’s design, but it’s a cut above the cheapest graphics cards around. There’s matte-black plastic around the sides and a dotted plastic finish along the bottom of the cooler. There’s no fancy backplate, but I wouldn’t expect that from a card at this price.

The cooling system consists of a single fan, which spins up to a decent whirr when under load.  You’ll probably want a fairly well-insulated case to keep noise at bay, but it’s far from the loudest I’ve heard. 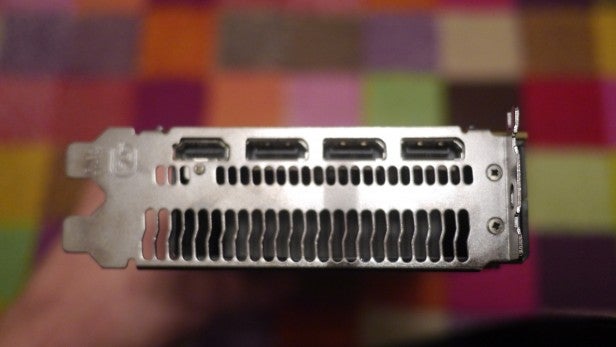 The RX 480 gets its juice from a single six-pin PCI Express power connector. There are three DisplayPorts and an HDMI port at the rear. The DisplayPorts are of the 1.4 specification, meaning that they’re ready for HDR gaming when titles and monitors begin to support the standard.

Next
Performance, overclocking and conclusion Review