The Radeon R9 390X is a new high-end card from AMD. Carefully positioned in the market, its £330 price marks it out as a top-tier chip. However, it isn’t as expensive as the hyper-powerful Fury X and GTX 980 Ti, which means it’s within reach of many more gamers.

The R9 390X is built using older hardware that’s been upgraded, and is designed to take on the Nvidia GeForce GTX 980 – one of the most popular cards around.

The R9 390X has the nomenclature of the firm’s previous flagships, but the release of the Fury X means this is no longer a range-topping GPU. That means AMD is content to fill the card with older hardware. The 390X uses the Graphics Core Next architecture that’s been inside AMD cards since 2011, and the Hawaii core that formed the R9 290X has been tweaked and renamed Grenada to build the R9 390X.

The R9 390X still has a whopping 2,816 stream processors. They’re split into compute units with 64 individual processors inside, and 11 of these compute units sit inside four Shader Engines that create the core. There’s a Graphics Command Processor above the lot, giving orders, and a shared L2 cache. 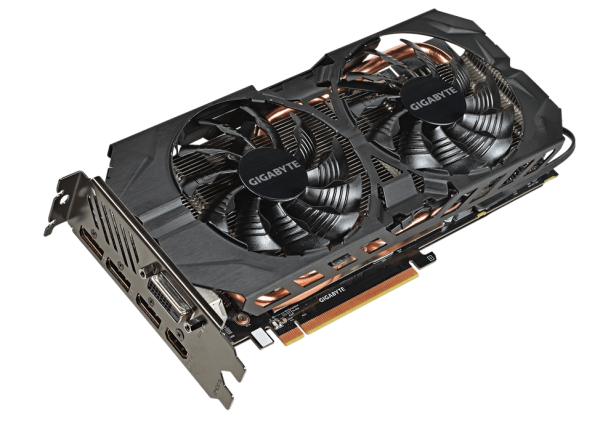 AMD has delivered performance improvements by tweaking certain parts of the core. Thermal benefits mean the core clock can be improved from 1,000MHz to 1,050MHz. The card’s TDP has dropped from 290W to 275W.

There’s no sign of the innovative High Bandwidth Memory that AMD debuted in the Fury X, but the R9 390X still has 8GB of GDDR5 – twice as much as the R9 290X. It’s clocked at 6,000MHz, which is faster than the older card, and it delivers a total bandwidth figure of 384GB/sec. This is higher than the 290X’s 320GB/sec, and even further ahead of the Nvidia GeForce GTX 980’s 224GB/sec figure.

The R9 390X has 6.2 billion transistors and retains a 28nm manufacturing process, and the entire card churns out a peak bandwidth of 5,914 GFLOPs – almost 300 GFLOPs more than the R9 290X could manage.

The R9 390X lines up against the Nvidia GeForce GTX 980, which is around £50 more expensive. Nvidia’s card only has 2,048 stream processors, but the core is clocked to 1,126MHz and can rise by 100MHz using GPU boost. The Nvidia card includes half as much memory and a lower bandwidth of 224GB/sec, and its bandwidth of 4,612 GFLOPs is lower on paper.

However, it does fight back in power consumption. The Maxwell architecture is far more efficient than AMD’s hardware, and the GTX 980’s 165W TDP is much lower.

AMD’s card is configured with HDMI 1.4a and DisplayPort 1.2a ports. That’ll be fine for most uses, but it does come with a couple of caveats. That HDMI connection can’t carry a 4K signal at 60Hz, so you’ll have to use the DisplayPort plug – and HDMI 1.4a also can’t handle as many audio channels as more modern connectors.

The R9 390X is a big GPU that requires at least single eight- and six-pin power connectors, although some third-party cards maybe in need of a bit more grunt; our sample needed two eight-pin plugs. The card we tested also had three fans, which doesn’t necessarily bode well for noise. But AMD does include a new feature that turns off the fans at low load, so the card will be quiet when you’re not playing games.

In terms of APIs, support for all of the usual protocols is included: Mantle, Vulcan, DirectX 12 and more. 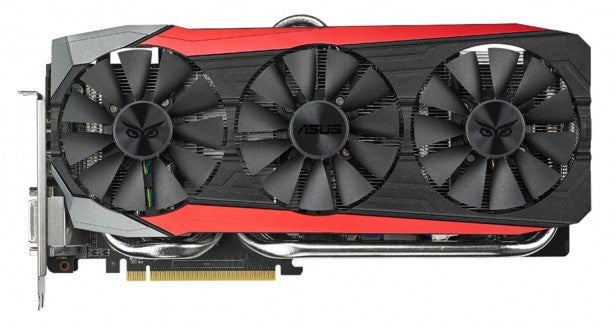 The R9 390X and its main rival, Nvidia’s GeForce GTX 980, traded blows in most of our benchmarks – it’s one of the closest graphics battles we’ve seen in some time.

Our first bechmark, 3DMark, is a theoretical test of a GPU’s grunt, and the two cards exchanged victories straight out of the blocks. The AMD hardware was better at 1080p, fell behind at 2,560 x 1,440, and then took a lead at 4K by a handful of points.

The close competition continued in Battlefield 4. The R9 390X’s 1080p average of 81fps was five frames behind the GTX 980, but the AMD card was one frame ahead at 1440p – and then maintained its single-frame lead at 4K. That said, its 29fps average at 3,840 x 2,160 isn’t quite smooth enough to be considered playable, especially with a minimum frame rate of 23fps.

In Batman, the R9 390X was consistently behind the Nvidia card, and the AMD chip didn’t impress in BioShock either – its 114fps average was seven frames quicker at 1080p, but the R9 390X was only two frames ahead at 1440p and slower than Nvidia at 4K.

AMD’s card pulled its finger out when we loaded Crysis – a far more demanding title than Batman and BioShock. It was better at all three resolutions, with its best score coming at 1440p: an average of 54fps is eight frames behind the GTX 980. 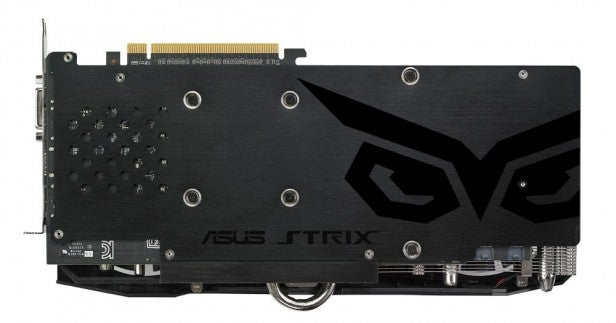 The R9 390X continued to perform well in Metro: Last Light and Middle Earth: Shadow of Mordor. It was faster in every test, with consistent gaps at 1080p and 1440p and led by a couple of frames when we cranked up the resolution to 4K. It was better than the GTX 980 in Tomb Raider, too, with a 7fps lead at 1440p and 4fps at 4K.

Grand Theft Auto V is our last games test, and here the R9 390X fell behind – it was eight frames behind at 1440p and two frames back at 4K.

The last theoretical test, Unigine, saw the cards resume trading blows. AMD’s hardware was slower at 1080p and 1440p, but better at 4K.

It’s an impressive showing for the AMD card, but it’s not all good news. The Graphics Core Next architecture doesn’t have a reputation for being the most efficient, and it falls further behind Nvidia’s Maxwell designs. The R9 390X rig’s top power draw of 410W is far higher than the GTX 980’s 273W – and it’s even more than the GTX 980 Ti and Titan X required. And, in a disappointing show, it even needs more power than the Fury X, which was more efficient and helped our test rig draw 369W from the mains.

That’s no good for your electricity bill, but it also means overclocking isn’t as impressive on this GPU. In addition, third-party manufacturers may struggle to keep down noise levels, since it will require more heftier cooling gear.

The R9 390X is cheaper than its rival from Nvidia, but it does an excellent job in keeping up with the GTX 980. Overall, the AMD card does better than Nvidia in five games, and loses out in only three titles. At 1440p, it’s faster than the GTX 980 in six of our eight test titles.

Outside of that bubble, the R9 390X continues to impress. It’s overkill for 1080p, but it has ample power for playing games at 1440p, and it has enough grunt to handle most games at 4K too. However, top titles will need graphical settings toned down before they run smoothly, because their average frame rates are hindered by poorer minimums.

The Fury X wasn’t available with board partner modifications. However, the R9 390X is a more conventional card that’s ripe for tweaking so there are plenty of options available if you want something a bit different.

Prices start at under £330, but at this end of the market cards don’t tend to have any overclocking or extra cooling features. 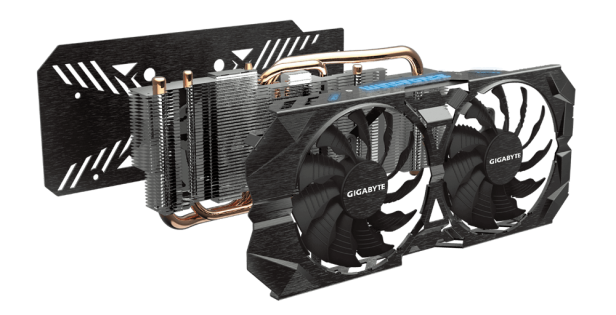 Some pricier versions of the card have different tweaks. Asus sells a £359 model that retains the stock speed, but adds the DirectCU II cooling gea. Gigabyte and Asus feature modest core overclocks.

With regards to board partners, the R9 390X offers an improvement from the Fury X, but it still can’t compete with the wealth of GTX 980 options available. Cards are more expensive, with prices from £379, but far more plentiful. Splash more cash and you can benefit from bigger overclocks, too; an MSI model that costs £402 tweaks the 1,126MHz core to a mammoth 1,216MHz.

No matter the card you want to buy, check its physical stats. Many R9 390X models are long and chunky, requiring both eight- and six-pin power connectors – so make sure your PSU has the correct plugs and your case is roomy enough.

The R9 390X is designed to take on the GTX 980, and it does an excellent job. It’s almost £50 cheaper than Nvidia’s card and, in many games, it’s a little faster – and in titles where it’s not quite as quick, it’s never far behind. AMD’s clock increases and memory boosts have clearly worked.

It’s more than powerful enough for 1080p and 1440p monitors, and it’s just about capable of 4K gaming too. Many titles will play at their highest settings, and tougher games will still run smoothly at reasonable quality levels.

The R9 390X is competitive in raw performance terms, but it falls behind Nvidia in other areas. It consumes far more power, which has an impact on noise, heat and overclocking. In addition, there are fewer third-party cards available.

There’s little to choose between the two cards in benchmarks, with the R9 390X only just edging ahead of the GTX 980.

The gaps aren’t wide enough to make a significant difference in what resolutions and quality levels are viable, but the AMD card is the best option if you’re searching for the best speed without hopping up to the next tier of GPUs.