The current range of AMD cards seems like it’s been designed to directly compete with Nvidia products, and the new Radeon R9 390 is no exception: this £276 chip goes head-to-head with Nvidia’s GeForce GTX 970.

It’s business as usual for AMD, which has recycled an older part to build this new card. With a clock boost, more memory and DirectX 12 support, this isn’t necessarily a bad thing.

The R9 390 makes use of the Graphics Core Next architecture that’s been present in AMD graphics cards since 2011. More specifically, the core inside this new card is dubbed Grenada Pro, and it’s based on the Hawaii Pro chip that featured in 2013’s R9 290. Not surprisingly, the R9 390 shares the same architecture as the Hawaii XT core inside the R9 390X, albeit with a couple of tweaks.

The biggest change comes in the memory department, where the 4GB used on the older card has been doubled to a monster 8GB. This brings a rise in clock speed from 5,000MHz to 6,000MHz, making this one of the mightiest memory configurations seen in any card available right now. The old card’s core clock of 947MHz has been improved to 1,000MHz, which is only 50MHz behind the pricier R9 390X. 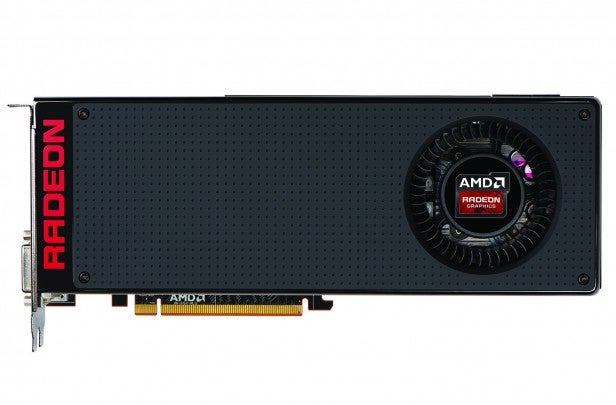 Elsewhere, the card remains the same. It contains 6.2 billion transistors, and the core still features 2,560 stream processors – only 256 behind the R9 390X.

All this amounts to a convincing slate of specifications when lined up against Nvidia’s GTX 970. That card has only 4GB of memory and its 256-bit memory interface is half the width of AMD’s new hardware. When it comes to core clock speeds, little differentiates the two – the GTX 970 is only 50MHz quicker than the R9 390. Not, of course, that the way these cards are architected makes these numbers directly comparable.

While this all bodes well for benchmarks, there’s one area where the AMD card is likely to fall behind. In the past, the older architecture hasn’t fared well against Nvidia when it comes to heat and power consumption, and we can’t see that changing here. This doesn’t only translate to a higher electricity bill, either; it also means there will be less versatility when it comes to partner cards.

While the R9 390 is uses so much power that it requires a large card with a hefty cooler and power circuitry – like most high-end graphics cards, it must be said – the 970 is available in a mini size. Only 17cm long it allows you to get the performance of that card in nearly half the space you’d normally expect, making it ideal for building a smaller PC.

Elsewhere, the R9 390 is business as usual. It offers built-in support for Vulkan and Mantle, alongside AMD’s TrueAudio API, and of course it supports FreeSync. ZeroCore technology is also included, which powers the card down into a standby state when the PC is idle.

The R9 390 is perfectly capable of supporting several monitors but our performance tests indicate it’s ideally suited to use with a single screen of up to 2,560 x 1,440 resolution.

At 1080p it absolutely powers through all our benchmarks, all of which we run at the absolute maximum detail settings. Its worst in-game average was a result of 77fps in Battlefield 4, and its best set of results came in Tomb Raider, where it returned minimum and average frame rates of 116fps and 150fps.

That said, the AMD card’s performance credentials were still established at this modest resolution. Its Battlefield 4 minimum of 64fps is some 8fps higher than the 970, and its 77fps average sits comfortably between the two Nvidia cards. It maintained its lead over the GTX 970 in Crysis 3 and Metro: Last Light, outpaced the Nvidia card in both of our theoretical tests, and even caught up to the GTX 980 in Middle-Earth: Shadow of Mordor and Tomb Raider. 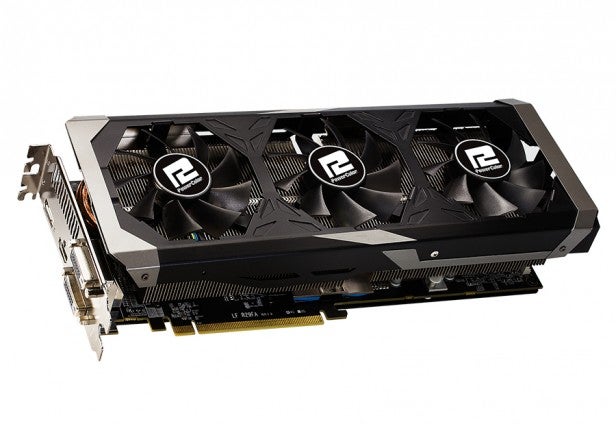 The R9 390 kicked on in Crysis 3 and Metro: Last Light. In Crysis its 50fps average beat both Nvidia cards, and in Metro it did the same: its 65fps result was two frames behind the GTX 980.

The AMD card fell behind only in Batman: Arkham Origins, where its 61fps minimum and 88fps average both lost out to the 68fps and 91fps results of the GTX 980.

The R9 390 doesn’t quite have the performance we’d want to game at 4K, but it’s not far off. Its BioShock average of 38fps is just about playable and again the result fell between the two Nvidia cards. It’s a similar story in Batman, where its result of 56fps is even closer to our ideal of 60fps. In Metro: Last Light and Tomb Raider the AMD hardware actually beat both Nvidia cards, and it fell between the two chips in the synthetic tests.

Overall, then, the AMD card stacked up well against the Nvidia hardware in 4K tests, and its performance looks decent in the wider world: it fell below the crucial 30fps average figure in only Battlefield 4 and Crysis 3.

However, bear in mind that some of our 4K tests saw minimum frame rates drop below 20fps, which means you’ll have to dial back the graphics settings to get smooth play on one of these high-resolution screens. 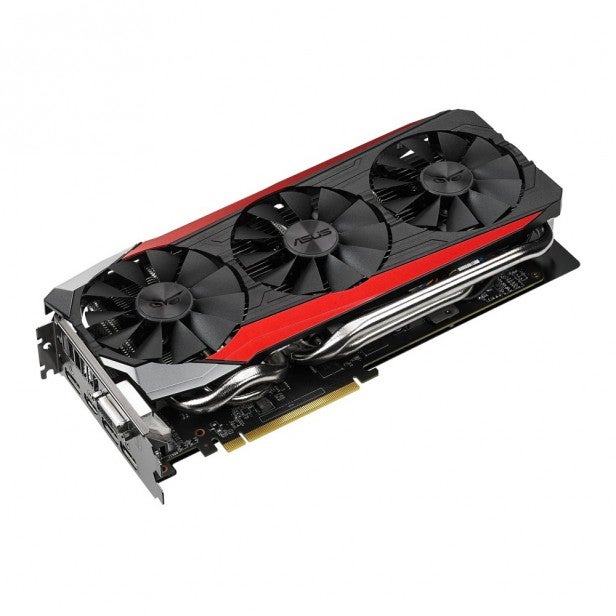 The R9 390 performed extremely well across the board; better than its key rival in most benchmarks, and it was even able to compete with the GTX 980 in some of our tests. It’s a clear indication that the huge amount of memory and its 512-bit bus have a bigger impact on performance than the modest improvement made to the core’s clock speed. If any indication is needed, just look at 3D Mark: the R9 390’s result of 10,793 is significantly better than the R9 290’s score of 9,379.

It’s a good set of benchmark scores then, but AMD’s older architecture proved power-hungry across our benchmarks. With the R9 390 installed, our test rig consumed 385W at peak. This is more than 100W higher than the rig required with both Nvidia cards – and its idle power consumption was higher too (102W compared 83W). Based on putting in 20 hours of gaming a week and leaving you PC on (i.e. idle) 12 hours a day that’s (very roughly) around £15 – £30 extra on your electricity bill a year.

We’ve no concerns about the R9 390’s peak temperature of 66°C, though this will vary depending on which exact card you buy, as different card partner manufacturers use different coolers – you can’t buy an R9 390 with an AMD reference cooler.

The R9 390 has already been bolstered by a handful of board partner variants. The cheapest we’ve found are models from PowerColor and XFX, which cost £260 and come with small overclocks – the former runs at 1,010MHz and the latter at 1,050MHz.

Mid-range models cost around £276, and the most expensive R9 390 is from the Asus Strix range. It costs £300 and has the firm’s impressive cooling gear, but it still doesn’t have much of an overclock: the core is boosted to only 1,050MHz.

It’s good to have variety in the market, but AMD’s efforts pale in comparison to the versatility on offer from Nvidia. The cheapest GTX 970 costs £250 and features only a 10MHz overclock, but there are around two dozen options available with prices going up to £320.

Plus, of course, there are those mini variants on the GTX 970, which are to all intents and purposes just as fast as the larger versions. 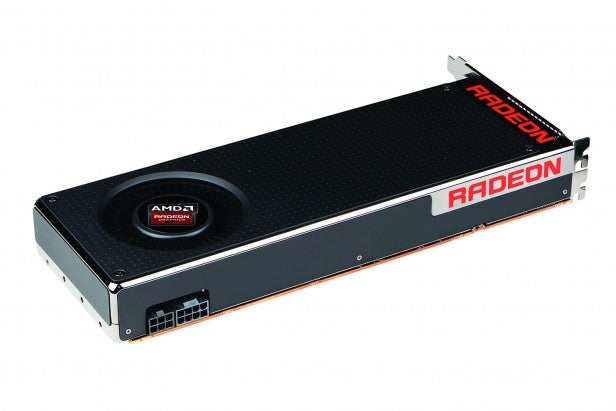 For AMD’s full-length cards, you’ll need to find a case long enough to accommodate, and it will need to connect with eight- and six-pin power connectors in order to function.

Otherwise the cards matchup fairly well in terms of overall features, with both including some options for free games, both supporting their respective G-Sync/FreeSync tech and both offering the key benefits of DX12.

Given the architectural similarity between the R9 390 and its bigger, X-branded brother, it’s no surprise that the story of AMD’s latest card is familiar.

The R9 390 proved faster than the GTX 970 in the majority of our benchmarks, and even caught the GTX 980 in a handful of tests – but that performance victory came at the cost of mammoth power consumption, and you can’t get the 390 in a mini version like you can with the GTX 970.

If you’re not overly concerned by power consumption, and need a card where performance is key then the R9 390 is the one to buy. This is especially true if you’re building a traditional tower system and want the future-proofing provided by 8GB of memory. That said, Nvidia’s rival remains a contender for smaller, low-power machines where frame rates aren’t as vital.

Want to upgrade your PC elsewhere? Then check out our verdict on the best SSDs on the market. Or click here to discover our pick of the best 4K and gaming monitors available right now.