This may be one of AMD’s most recent high-end GPUs, but it’s based on the Graphics Core Next architecture that’s been in use since way back in 2011. That might make the R9 290 sound long in the tooth, but it makes sense: AMD has refined its hardware to make gains in every new generation, and the reliance on reliable, existing silicon means it can continue to support existing technologies.

This latest card is a bit of a throwback when it comes to power consumption but its performance is good for the price.

The Hawaii GPU used to build the R9 290 is 24% larger than the HD 7970 that it replaces, and its 6.2 billlion transistors easily outweigh the 5.2 billion installed inside the Nvidia GeForce GTX 970 – the Radeon’s biggest rival. Elsewhere, architectural changes mean the new core can handle more tasks at once, with graphics and compute tasks able to be handled simultaneously.

The R9 290 shares its underlying core with the £275 R9 290X but, to build the cheaper of the two cards, AMD has deactivated some of its stream processors. This card has 2,560 processors organised into 40 compute units rather than the 2,816 processors and 44 units installed into AMD’s current flagship single-GPU card. The R9 290’s core clock of 947MHz is below the GTX 970’s 1,050MHz speed.

That’s still an impressive amount of hardware, and it’s paired with 4GB of GDDR5 – the same amount on paper as the GTX 970. And, unlike Nvidia’s card, the R9 290 can make use of all of that memory when it’s playing top-end games. It’s clocked to 1,250MHz, which is a little slower than the Nvidia card, but it’s accessed using a 512-bit bus – much wider than Nvidia’s 224-bit equivalent.

The older architecture does mean that AMD’s card won’t be as efficient as its competition from Nvidia. That will cause issues for the card when it comes to heat and power consumption, but it’s also manifested in a more practical way: this card requires six- and eight-pin power connectors, while the GTX 970 needs just two six-pin plugs. 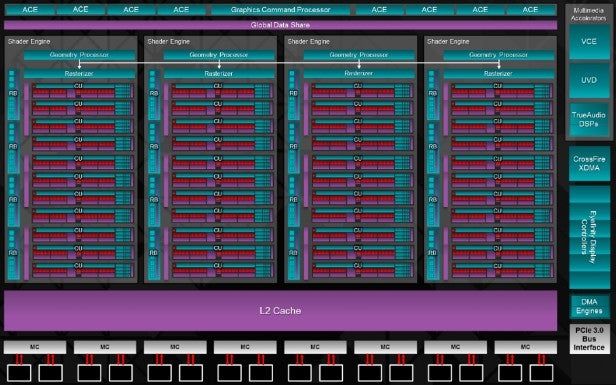