For years now Amazon has offered a lower-end Kindle model for those who don’t want to splash out £100 or more on an ereader. Before, this cheaper model left out the touchscreen, instead using old-fashioned buttons.

However, this new model does have a touchscreen, instead missing the front light of the Kindle Paperwhite and Kindle Voyage. Here’s the thing: we love ereaders with front lights and we strongly suggest considering one, especially if you’re not going to bother with paper books at all going forwards.

If £109 is just too much for your wallet, though, this basic Kindle still provides a great experience. And at £59 it’s the cheapest Kindle ever – as long as you don’t mind seeing Amazon’s Special Offer adverts (it saves you £10). 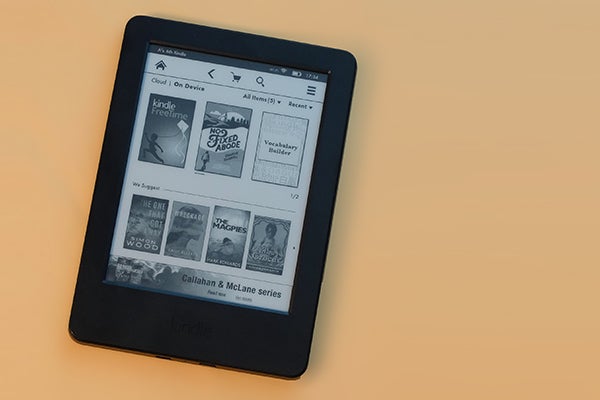 It’s not just tech flashiness that’s missing from the basic Kindle, though. It is also a fair bit cheaper-feeling than previous models.

Where most previous Kindles have had soft-touch rears, this one is simpler textured plastic. Should you be upgrading from an older Kindle, you many be initially a bit disappointed by the low-end feel.

However, examine the actual build closer up and there’s nothing worrying here. There’s no undue flexing to the plastic and there are no wide seams. It does appear built to last, even if it doesn’t telegraph that to your digits too well. 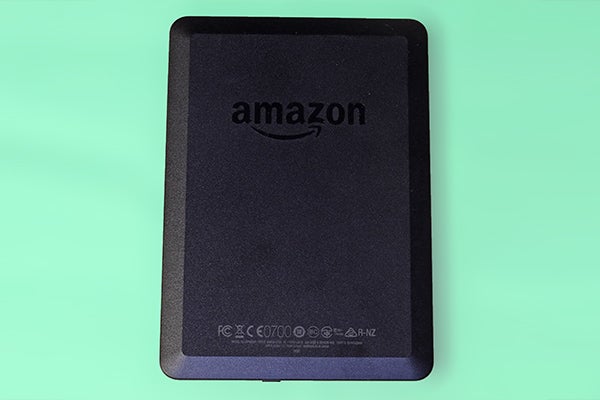 Its design works well in practical terms, too. The contouring of the Kindle’s back is comfy and it’s fairly light at 191g. That’s a bit lighter than the 206g Paperwhite.

Switching between the basic Kindle and the top-end Kindle Voyage, we actually think some people may prefer the surer grip of the cheaper model. It has the reassuring chunkiness of the Kindles of old, its closest relative being the 2012 Kindle Touch. 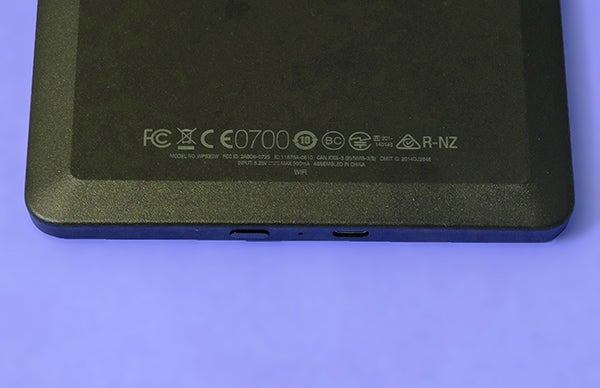 This time, though, there are no buttons at all, aside from the power button on the bottom. All control is done through the touchscreen, and as usual there’s no memory card slot but the 4GB of internal memory can be accessed through the Micro USB port on the bottom.

Contrary to what some think, you can put your own books on a Kindle, it just doesn’t support the popular EPUB format. And while 4GB doesn’t sound like a lot top someone used to computer or phone storage, we’ve never needed more: it’s enough for thousands of books. PDFs can be much larger than ebooks, but Kindles are still not perfectly suited to displaying them. 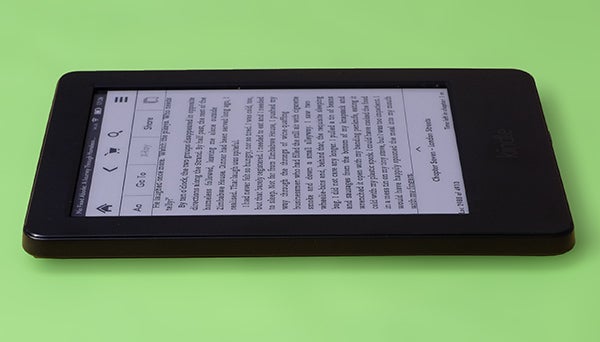 Part of this limitation is down to the kind of screen Kindles use. Like every non-Fire-series Kindle, the basic model uses an E Ink screen, and it measures six inches across, just like the Paperwhite and Voyage.

However, its display is behind the other models in a few respects. The most important is one we mentioned at the start of the review: it does not have a front light.

Other more expensive ereaders use side-firing LEDs whose light is passed through a ‘light guide’ matrix layer on top of the display that disperses it evenly, lighting up the whole screen area with a soft glow. We first thought of these front lights as a way to read in bed without a bedside lamp, but they’re generally used all the time nowadays as a way to increase the vividness and contrast of the E Ink display.

This is what you’re missing out on in the £59 Kindle. 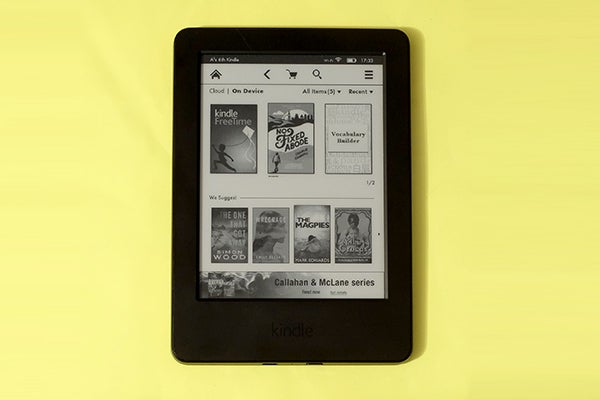 Greater use of front lights also worked hand-in hand with a generational shift in E Ink screens from E Ink Pearl to Carta. The Paperwhite and Voyage use Carta, which offers deeper black “ink” but slightly yellowier-looking white areas, something that is negated as soon as the front light is switched. on The basic Kindle uses the older Pearl screen, just like the old Kindle Touch. It still looks good, but only in a reasonably well-lit area.

Its sharpness is not as good as the Paperwhite or Voyage either. You get 800 x 600 E Ink “pixels” here, 1024 x 758 in the Paperwhite and a pretty excellent 1430 x 1080 in the Kindle Voyage. Where the Voyage’s text is “Retina” sharp, the basic Kindle does look a little less smooth. 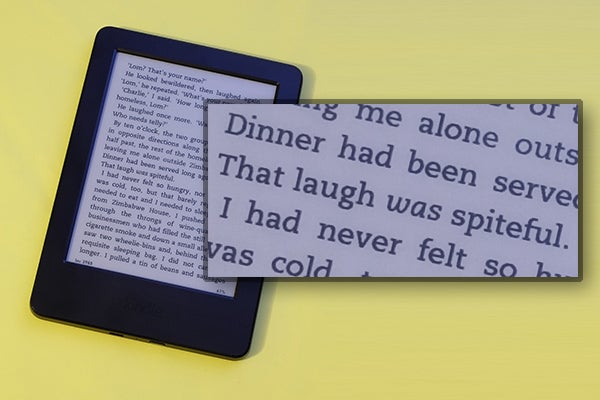 Text isn’t 100 per cent sharp, but is also not bad at all

However, if you’re on a tight budget we’s advise not to get too hung up on resolution. A low-resolution E Ink screen looks a lot nicer than the low-resolution LCD one you might find on a cheap tablet or phone.

If you’re interested why: E Ink uses black and white (well, white-ish) microcapsules that are raised and lowered to form the image we see. This leaves it without the obvious gaps between pixels you see in low-res LCD screen, where the parts that make up an image are actually pinpricks of light in a sea of black.

There are several obvious compromises in the £59 Kindle, but aside from the front light we’re happy to live with all of them. Because underneath it’s otherwise extremely similar to the three-times-the-price Kindle Voyage.

They share the same software, and actual performance is remarkably similar. As ever with an E Ink device, refresh rates are far slower than an LCD screen, but that just doesn’t matter when you’re reading and it’s as easy on the eyes as the more expensive models.

We had expected to see some performance issues, but there in fact are none. The basic Kindle has a 1GHz processor just like the Kindle Paperwhite. 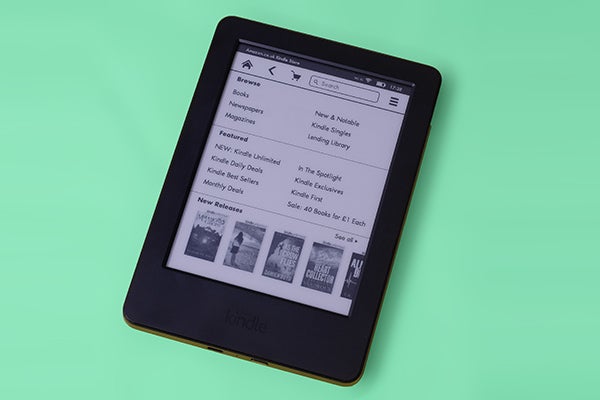 Aside from the lower pixel density making certain parts look a bit scrappier close up, the interface looks just the same as it does on its pricier brothers. Amazon has made scores of little changes over the years, but if you’ve ever used a Kindle it should seem pretty familiar.

It puts your recent books right at the front of the ereader, not to mention booting right into your book, from where you left off. While we imagine many of you may have used an ereader before, if you haven’t they really feel like a digital book, not a poor impersonation.

You’ll get up to four weeks’ daily use off a charge and the Kindle offers Wi-Fi, letting you buy books without having to hook it up to a PC/Mac.

Amazon has also tried pretty hard to enrich its library and services over the last few years. 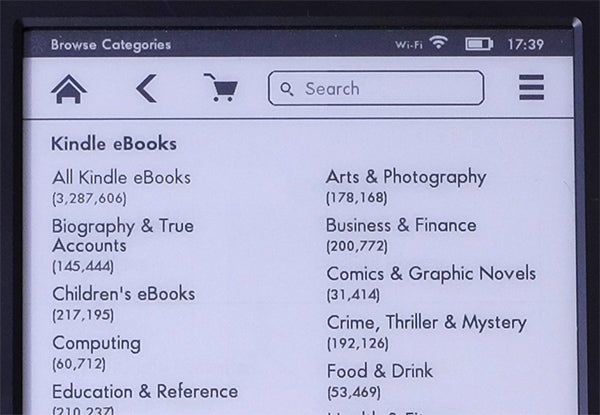 First, it announced X-Ray, which provides more information about the characters, locations and more in novels you read. You can just search Wikipedia for terms too, but properly X-Ray’d novels have this extra information baked in. All it takes is a couple of on-screen presses.

Then there are FreeTime, Kindle First and Kindle Unlimited.

FreeTime is designed to help you motivate kids to read, and lets them track their reading. It’s somewhat similar to what you’ll find in rival Kobo readers, which have such things built into the core interface.

Kindle First is for Amazon Prime subscribers, giving them free access to one book a month that hasn’t been published yet. The Kindle Lending Library is another Prime special, getting you loan-based access to over 500,000 books. However, Amazon is doing its best to make the newer Kindle Unlimited trample the poor Lending Library to death, making lend-able books rather hard to find. 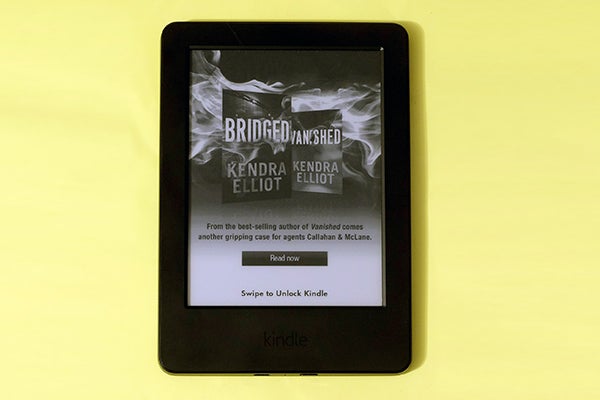 We can understand why Amazon would rather support the much clearer Unlimited: it’s a £7.99-a-month subscription service that gives you Netflix-like unlimited access to thousands and thousands of books and audiobooks. At the time of writing there are 828,292 Unlimited publications and 7090 audiobooks that work with Amazon’s nifty Whispersync for voice feature, which lets you maintain progress between text and audio versions of a book, across devices. It’s clever stuff.

There’s so much on offer from Amazon that it can seem a bit confusing to start with. That said, you can easily ignore all the extras, especially if you pay the £10 to get the Kindle without Amazon ads. What these do is to display adverts – for additional Amazon services during our testing – when the Kindle is in standby mode. It’s fairly inoffensive. 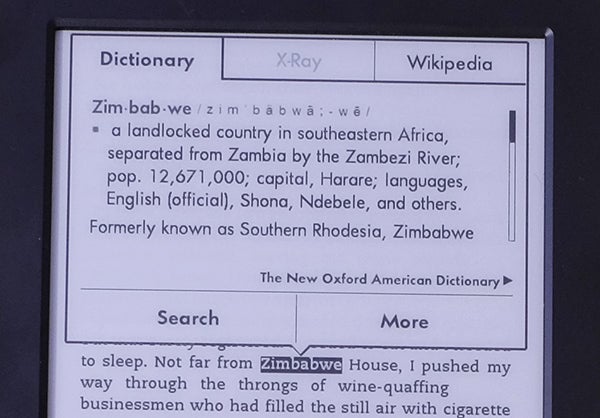 The actual experience of reading with the Kindle is as it has been in these devices for a good few years now. You tap at either side of the screen to flick over a page, and can annotate or look up words or phrases with a longer press. Even these features are easy to ignore: 95 per cent of the time we use a Kindle as a pretty “dumb” digital book. And that’s OK. 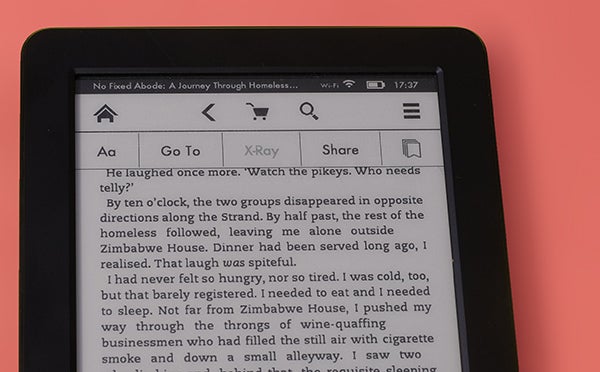 Should I buy the Kindle?

We at Trusted are big believers in the benefits of a proper ereader over using an LCD (or OLED) screen device to read books. And just like every E Ink Kindle to date, the budget £59 model is reliable, and provides a great reading experience.

There are some obvious compromises, but in other areas we’re glad to say it’s very much business as usual. Despite feeling a little cheap, it’s no cheap knock-off.

We would advise considering a front-lit model if you can afford it, though. Not only does it mean you can read in the dark, the light of the Paperwhite and Voyage also improves the visibility and perception of contrast in daylight too.

However, a huge £50 disparity in the cost of the basic model and the step-up Paperwhite means this low-end model still absolutely earns a recommendation. Our top bargain hunter’s tip is to check out the Refurbished section of the Kindle area on Amazon – refurb Paperwhites can often be found there for £89.

Those willing to trade away the simple core (and extra bells ’n’ whistles) of the Amazon ecosystem might also want to consider the Kobo Glo, an older front-lit ereader that can be sound for £80 online.

It’s not flash and it’s not fancy, but this bottom-rung Kindle still offers a very solid reading experience.