The next step in the evolution of the E-ink ereader is not, as some expected, colour screens but integrated lights. First on the scene was the wonderful Amazon Kindle Paperwhite, and now Kobo has responded with the Kobo Glo. It’s £10 cheaper than the top Kindle, more flexible in some respects and is a darn good ereader. All it lacks is the magic of the Kindle ebook-buying system.

Last year, Kobo made a splash on the ereader scene with the great Kobo eReader Touch. It was cuter-looking than the Kindle, had a more fun-filled interface and let you read the EPUB books that Amazon’s range didn’t, and doesn’t support. Kobo has updated the eReader Touch design with the Kobo Glo. Like the Amazon Kindle Paperwhite and Nook GlowLight, the Kobo Glo features a front-lit screen, letting you read in the dark without a bedside light.

The look of the Kobo Glo is much like its predecessor’s, though. The front and sides are a single piece of moulded plastic – either black or white – and the rear is a panel of slightly soft touch plastic. 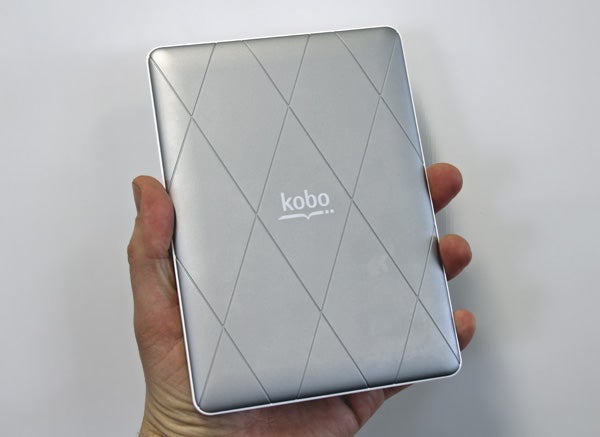 It comes in four shades, blue, red, silver and black, although the pastel shades of the Kobo eReader Touch have been swapped for more vivid colours. Consequently, there’s more scope for people to find them objectionable, and to our eyes the silver model does not look great.

The texture of the Kobo Glo’s rear is different from the Kobo eReader Touch’s too, ditching the quilted contouring but keeping a diamond-shaped pattern, this time made up of thin lines cut into the back. It’s quirkier and friendlier-looking than the Kindle family, but ergonomically it isn’t quite as good.

The Kobo Glo has relatively severe edges, and its soft touch finish isn’t quite as velvety soft as some of the competition. It is markedly lighter than a Amazon Kindle Paperwhite, though. Weighing 185g, it’s noticeably trimmer and is the lightest ereader with a front-lite screen you can get in the UK.

With no nav buttons on the Kobo Glo whatsoever, all page turning and navigation is done using the touchscreen. As such, it’s critical that the ereader rests happily in your palm, leaving you thumb free for page-turn duties – and it does. Like the Amazon Kindle Touch, it’s a design success.

The Kobo Glo also offers a couple of extra features you don’t get with thr Amazon Kindle Paperwhite. There’s a microSD memory card slot on the left edge if the 2GB of internal memory isn’t enough (pro tip: it probably is) and the Kobo Glo can handle the EPUB files that let you lend ebooks from public libraries. 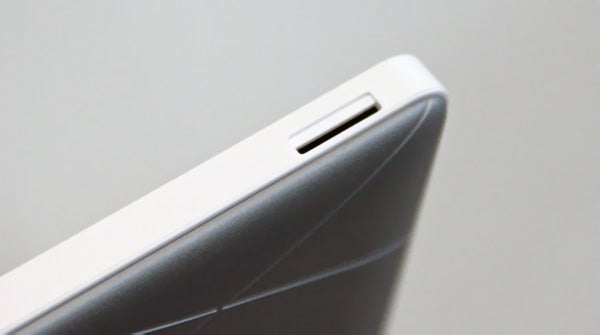 Where you pay for these Kindle-beating bits is in the screen. The specs of the Kobo Glo’s display are a point-for-point match with the new Amazon Kindle Paperwhite. It has a 1,024 x 768 resolution E-ink display, much higher than the 800 x 600 resolution of the previous-generation Kobo eReader Touch. 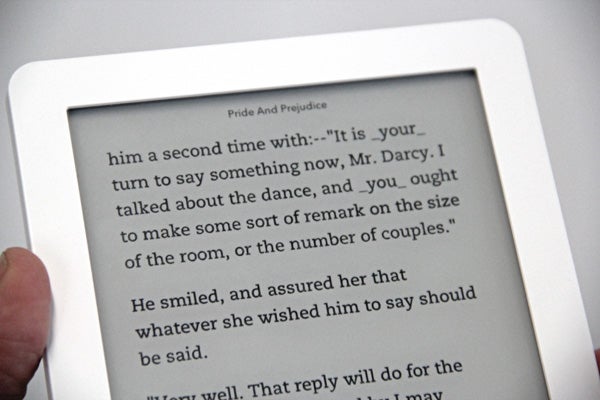 The screen light works in a similar fashion too, with LEDs firing across a specially-designed layer that distributes the light around the surface of the display. They employ the same basic technologies, but the Kindle is ever-so-slightly superior. Contrast is better on the Kindle and in spite of the level resolution, text appears slightly sharper on Amazon’s model – most likely down to the way text is rendered.

The lights are about as problematic as each other. Where the Kindle fires upwards from the bottom of the screen, the Kobo Glo fires downwards from the top, and the light dispersion isn’t completely consistent. 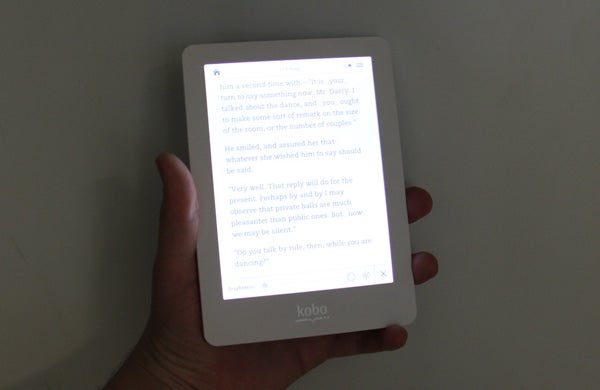 There are no shadowy dark patches here, but there’s a line of brighter white up top, and at top brightness the colour appears to turn blueish towards the bottom. It’s a little brighter than the Paperwhite’s, though, and they perform roughly as well as each other. It’s a superb step up from the non-lit Kobo model. 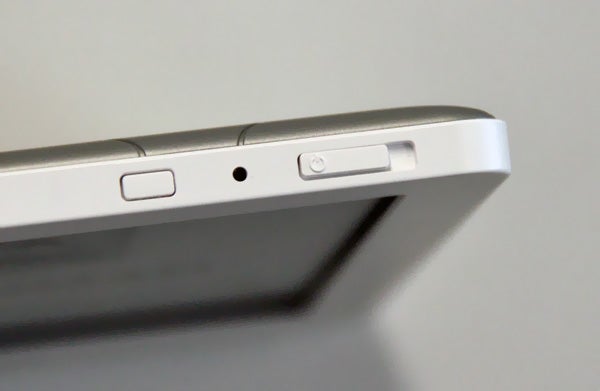 The left button switches the light on and off

The light doesn’t destroy the ereader’s battery life either. The Kobo Glo is rated for around 70 hours of use with the light at 15-20 percent, which is easily bright enough to read with in the dark – maximum brightness is way too bright for night-time reading. Kobo has included a little button on the top edge of the Glo, which lets you quickly turn the light on and off. 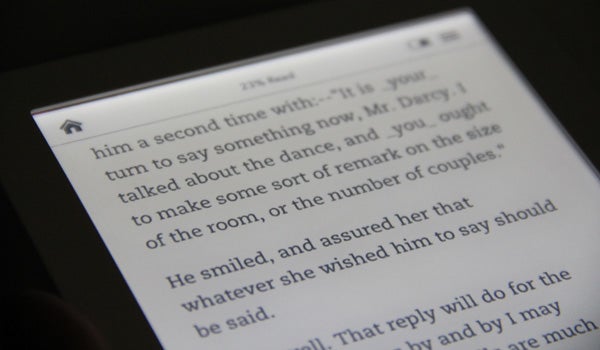 Taking the pedant’s hat off for a second, both the screen and light are largely excellent. Within a week of use, former ereader owners will wonder how they ever got by without an integrated light. The Kobo Glo gives you quick and easy control over the level of the backlight too. Within two screen taps you can call up a light intensity slider that offers around 20 gradations.

Getting the best out of the Kobo Glo requires a little bit of fiddling, because it gives you so much control. Conversely, the Kindle range takes a more Apple-like approach, largely dictating how text looks. 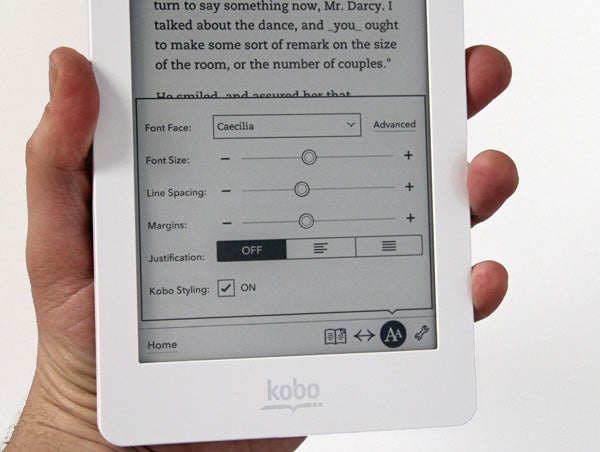 Here, you can control font style (10 in total), size, spacing, margins, weight and sharpness. The most dangerous, arguably, is sharpness, because ramp it up and it’ll have precisely the opposite effect, making characters look blocky rather than sharp. Spend a while fine-tuning and the Kobo Glo’s text can look roughly Kindle-grade. Spend a while and pick the wrong options and it can look pretty poor.

One of the best bits of Kobo’s higher-end ereaders like the Kobo Glo is the interface, which is thoroughly tasteful, intuitive and lovely to look at. Most importantly, it puts your most-recently read books within a tap of the homescreen, which shows five thumbnails in decreasing size.

This is the primary home screen, calling Reading, but there is another called Discover too. This acts as a quickie way to find new books to buy from the Kobo bookstore. The Kobo Glo does its best not to force you into the full, intimidating store front of the Kobo virtual bookshop – intimidating because like all E-ink devices, browsing the thing is fairly slow. Instead, the ereader offers this Discover part and a universal search that will look for books by title both locally and online. 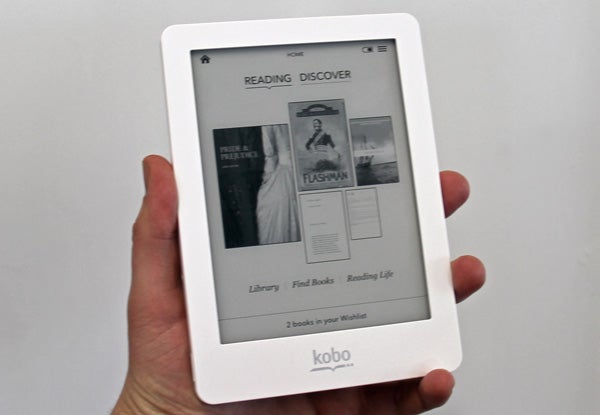 You can browse the Kobo store’s wares online, but buying books doesn’t feel as smooth or easy as on a Kindle. Here, you have to register separately and input all your details on the reader – where just about everyone has an Amazon account by this point – and there’s no Whispernet-like functionality.

With a Kindle, you can buy a book on the Amazon website and have it directly sent to your Kindle ereader – not so here. The Kobo ebook store isn’t bad, but it’s nowhere near as simple or seamless as Amazon’s infrastructure allows.

This won’t matter too much for those who have their own ebook collections, of course, plug the Kobo Glo into a computer using the microUSB port on the bottom edge and you can easily drag and drop files onto the internal memory. EPUB is the main file format intended for use on the Glo, but PDFs, basic image files, HTML docs and TXT files will also work too.

Kobo’s particular emphasis lies elsewhere, though. The Kobo Glo lets you post extracts to Facebook directly from within a book, and offers a Reading Life section that harvests stats on how much you read. You can also unlock achievements for your reading prowess, which might be neat for kids. 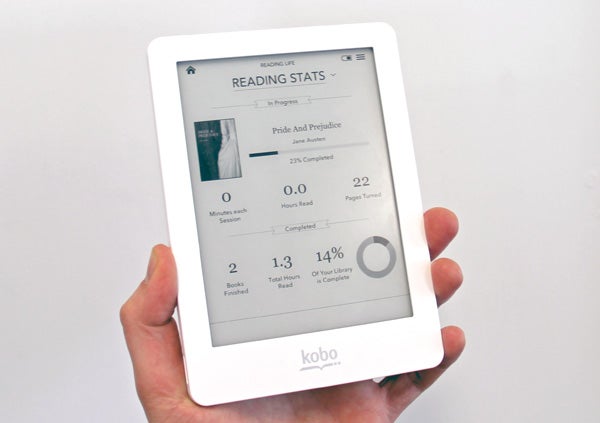 The Kobo Glo doesn’t gloat about its other extra features, but there are some neat ones. Within a separate Extras menu within Settings, the Glo offers Chess, a rudimentary sketch pad, Sudoku and a web browser. They’re hardly selling points by themselves, but may come in handy on long journeys when your phone’s out of juice. And keeping them safely out of the way was a great choice on Kobo’s part.

The Kobo Glo costs £10 less than the Amazon Kindle Paperwhite, it’s lighter and offers comparable ereader skills. However, as the screen is that little bit better and the Kindle book-buying experience pretty much unbeatable, the Kindle is still our ereader of choice if the lack of EPUB support doesn’t mean much to you.

The Kobo Glo has rocketed to the esteemed position of our second favourite ereader. No, it hasn’t unseated the Amazon Kindle Paperwhite, but it has had a good try. It’s more flexible, has a equally good inbuilt light, offers greater customisation and the vital EPUB support that the top dog ereader lacks. If these things matter to you, the Kobo Glo is a great alternative to the Kindle Paperwhite