Amazon’s pricier Fire TV streaming devices are all pretty good. But then they’re all relatively expensive too, so they really ought to be.

It seems the company is bored of seeing the likes of Roku (with its excellent Streaming Stick+ in particular) suck up all the sales below the £50 mark, though – and that’s led it to serve up this, the Fire TV Stick Lite.

It’s got some of what makes the more expensive Fire TV streamers so compelling. But not all of it, of course, that’s why it’s so much more affordable. But is cheap Fire TV Stick a proper bargain or a false economy?

At a mere 83 x 30 x 13mm the Amazon Fire TV Stick Lite is among the smallest pieces of electronics equipment you’re ever likely to deploy. In terms of design it’s absolutely functional: an anonymous black stick with an HDMI plug at one end and a Micro-USB socket along one side.

Connect it into the mains using the supplied plug and USB cable, then plug it into one of your TV’s HDMI inputs (there’s a flexible HDMI extender in the package too) and you’re all set.

Features – Something old, something new

The most obvious way in which this is a ‘Lite’ Fire Stick TV is its 1920 x 1080 maximum resolution. It’s been a long time since Full HD was at the cutting edge of TV technology – but, of course, if you’re plugging a Fire TV Stick Lite into a 4K television, then the screen will take care of upscaling the incoming content for you. Whether or not the results look better than, worse than or indistinguishable from the native 4K output delivered by a Fire TV Stick will depend entirely on how competent an upscaler your TV is.

Despite this rather retrograde native resolution, though, the Fire TV Stick Lite is packing compatibility with HDR10+ dynamic metadata and 60Hz refresh rates – so perhaps that premium streaming service subscription won’t go entirely to waste after all.

The Lite’s on-screen interface is tidy, reasonably straightforward and not quite as Amazon Prime Video-centric as it was. It’s simple enough to rearrange, remove or add catch-up TV and streaming service apps – and if your TV is one of the less smart Smart TVs around, the ability to put Disney+ or Netflix apps (for example) front-and-centre is not to be sniffed at. 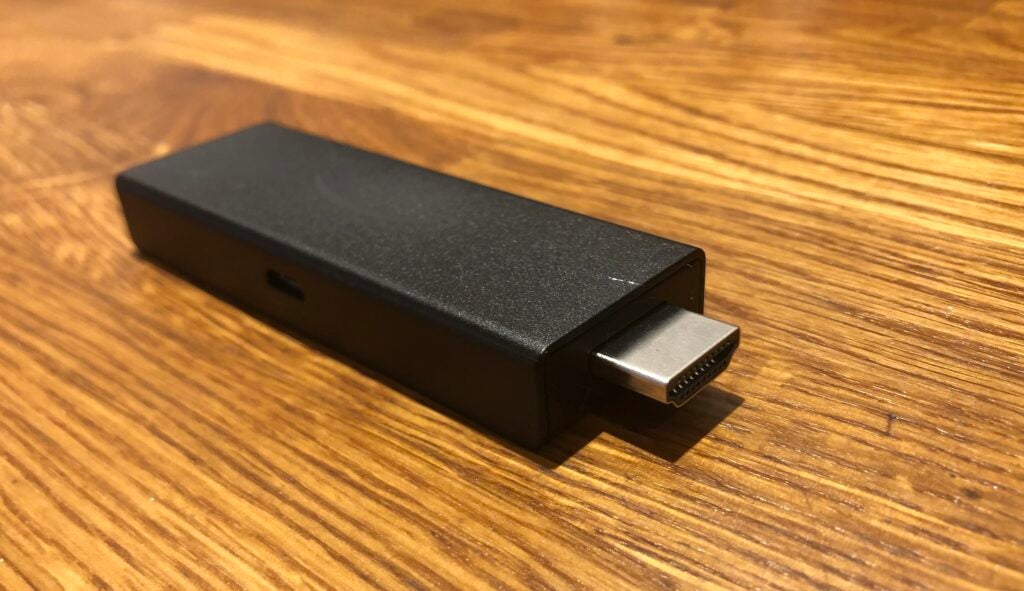 Navigation is via the bundled remote control handset – Amazon even provides a couple of batteries. And as far as the remote control goes, it’s very useful. The physical action of the buttons is positive – and if having to press buttons sounds a bit arduous, Alexa voice control is on board too.

There’s a mic button – and a mic, naturally – at the top of the handset, and those commands Alexa is able to help you out with are dealt with rapidly and reliably. Being able to request “rewind two minutes” to recap on what’s been happening on-screen while you were distracted is very handy.

Inexplicably, though, the remote control doesn’t feature any volume control. This is a facility other Amazon Fire TV devices include, so there must have been a conscious decision taken to delete it here, presumably in the name of ‘Lite’-ness. So if you want to have total control over what you’re watching, you’ll need the Fire TV Stick Lite remote control and the remote control for your television to hand. It’s a staggeringly inconvenient arrangement.

As far as audio goes, it’s a story of similar restriction. The Lite is capable up to Dolby Digital standard, and that’s your lot – there’s no Dolby Atmos pass-through, for instance.

‘Picture quality’ as it pertains to a product like this isn’t the most straightforward issue to address – because, basically, it all hinges on what the TV it’s plugged into is like.

Is it a 4K TV? If so, is it a good upscaler of 1920 x 1080 content? If it is, then you can enjoy reasonably detailed, convincingly coloured and crisply edged images from the Fire TV Stick Lite, and throw decent control of on-screen motion into the mix too.

This TV of yours: is it HDR-compatible? If so, does it have the breadth of contrast, the colour balance and the control of backlighting (assuming it’s an LED/LCD design) to do some justice to HDR content? If it is, and if it does, then images from the Fire TV Stick Lite will combine high contrasts with a colour palette of real breadth and vibrancy. 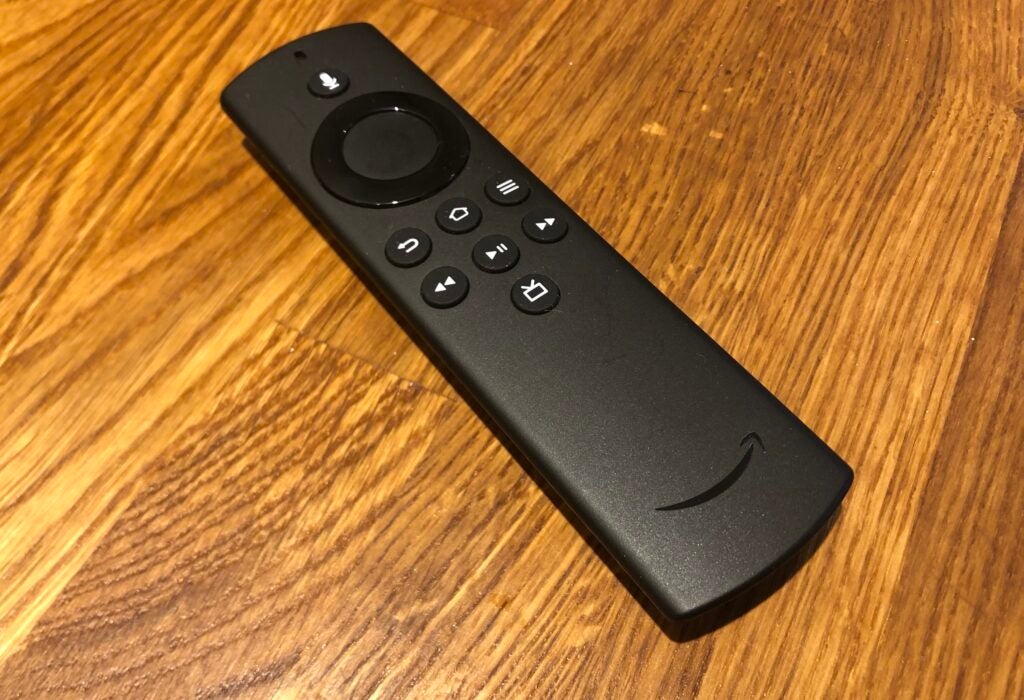 Of course, if your TV’s upscaling isn’t up to much, its attempts to force two million pixel’s-worth of content into its eight millions pixels will result in images that are softer, smearier and altogether less well defined than is ideal. They will almost certainly be short of detail, and shorter still where control of on-screen motion is concerned.

Of course, if you’re still the owner of a Full HD television and fancy a Fire TV Stick Lite to bring it into the brave new world of on-demand streaming, you can be surer of what you’re getting: access to most of the world’s available subscription services at a less-than-optimum resolution, and without the benefit of high dynamic range. Perhaps it might be more expedient in the longer term to consider one of the great-yet-affordable 4K televisions we’ve tested on your behalf?

Sound quality – At the mercy of your TV, again

Naturally, it’s more of the same where ‘sound quality’ is concerned. What sort of audio quality is your television capable of? Unless it’s one of those quite expensive models with a superior integrated sound system – a Philips TV with Bowers & Wilkins audio, for instance, or a Panasonic with Technics sound – then my money’s on it not sounding all that great. A bit thin and weedy, isn’t it, with little by way of bass response? Unhappy playing at any kind of meaningful volume?

Thought so. And that’s exactly how it will sound when the Amazon Fire TV Stick Lite is streaming to it. It’s not the Fire TV Stick Lite’s fault that there’s no room in a flatscreen TV panel for speaker drivers to properly do their thing.

You should buy the Amazon Fire TV Stick Lite if…

For very little outlay, the Fire TV Stick Lite brings pretty much every on-demand and subscription streaming service app worth having to your TV.

Perhaps ‘quite good’ is good enough where picture and sound are concerned. Perhaps you value the Amazon’s seamless, logical and stable user experience more highly.

In this implementation, Alexa is sharp-eared and responsive – and even a little apologetic should you be gauche enough to ask for something she can’t perform.

You should not buy the Amazon Fire TV Stick Lite if…

Because the Fire TV Stick Lite is restricted to Full HD resolution, your 4K TV will have to take care of upscaling that information to fit its screen. And some TVs, as we know, are much better at this than others…

Perhaps I’ve laboured this point, but I think it needs labouring. Despite being supplied with both Alexa voice control and a physical handset, there’s no facility here for adjusting volume levels.