Guys, I’m not sure if you’ve realised, but Nazis are pretty bad news. They’re the quintessential bad guy, and Achtung! Cthulhu Tactics gives you even more reason to gun them down by making them demon-summoning Eldritch cultists. That are also Nazis.

This turn-based strategy game, based on the tabletop RPG franchise Achtung! Cthulhu, blends together the Cthulhu mythos with WW2, where pulp heroes beat back the Nazi menace, and their assorted Eldritch allies.

As a turn-based tactics game, Achtung! Cthulhu keeps a tight grip on scale. There is no meta-strategy here beyond levelling up your units and making sure they’re packing the right loadout. This focus offers something unique: a tactics game that concerns itself not with open-ended strategy but a narrative adventure.

Importantly, this means that you don’t get the creeping increase in power that many of these games offer, and that’s important because while this is definitely a tactics game, there’s a strong element of horror. 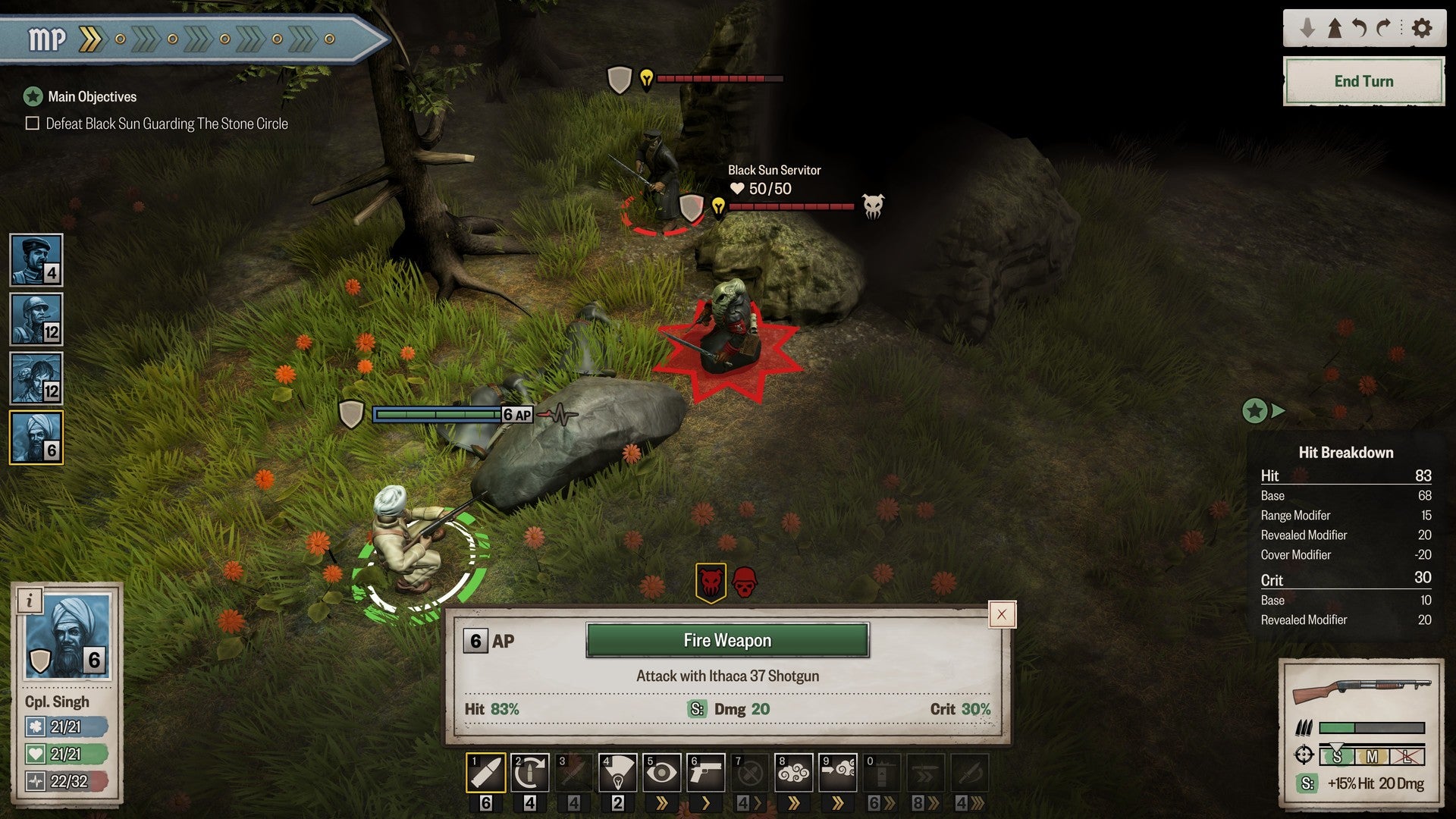 Cosmic horror largely relies on keeping its dangers unknown and instilling a deep sense of dread. That’s difficult to do in a top-down strategy game but the team at Auroch Digital have managed to pull it off with the Shroud. Ultimately, it’s some sort of beefed up fog of war that coats the battlefield, obscuring threats and giving your enemies powerful abilities as long as they’re swaddled in darkness. This encourages you to push your units forwards into the darkness, trying to identify what you’re killing and then slaughtering them.

This is one of Achtung! Cthulhu’s biggest strengths. You try to run down a lone unit, only to discover the thing out there in the darkness is a Shoggoth or one of several close-combat specialists, just waiting to ruin your day. Slow down, and you’ll could find that the enemy lurking in the mist is a sniper, and he’s drawing a bead on your commandos as they crouch behind cover.

The darkness keeps your enemies hidden, but it also makes them harder to hit, so the best way to play the game is to plow into the shroud to root out enemies, hoping you don’t bite off more than you can chew.

Combat is going to feel immediately familiar if you’ve played a turn-based tactics game before, whether that’s Jagged Alliance 2, X-COM or even Divinity: Original Sin 2 – but the unique cherry on the top of this particular game is Momentum. Your movement and regular actions are handled by AP — action points — but Momentum is a separate currency that lets you do the really cool bits. This could be a brutal charging attack, firing your sidearm, cutting loose with a machine gun until it goes click or even just extending your vision cone to keep the darkness at bay and give you more information. 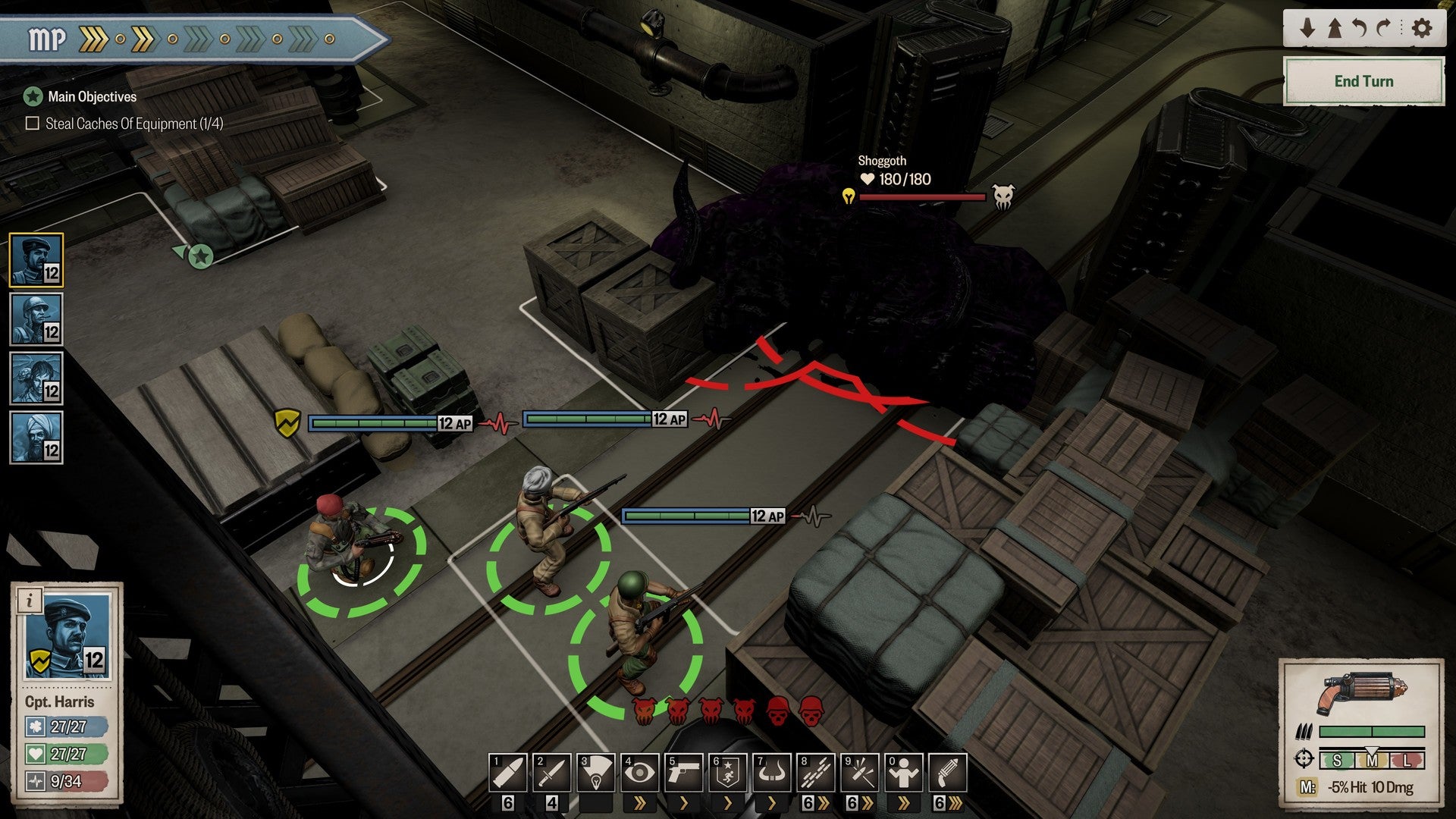 All of these activities burn Momentum, but you earn a small bounty each turn based on your leadership, but also earned when you score critical hits. This means that when one of your units does something cool — landing a sweet critical hit — it can give you as a player the chance to unleash one of your powerful abilities. This feels kinetic, giving a frisson to the combat that keeps things moving.

The game doesn’t concern itself much with moral ambiguity. While your heroes use Eldritch powers to combat the Third Reich, they’re full of nothing but derring-do and moxy, the sort of crew Indiana Jones might run with if they ever made any more movies after The Last Crusade – which, to be clear, they absolutely did not.

As these characters level up, they’ll gain and utilise unique abilities. One, a French resistance agent, starts off packing nothing but a Luger and a desire to leather fascists. Several levels later, and you start to upgrade the demon that has imprinted on her, allowing it to drain the life of enemies and heal with it.

These abilities are fun, and help slot people into a role, but this customisation often doesn’t go far enough, with progression to the later abilities occurring so slowly that it’s rewarding to reach the higher tiers of the skill tree, but phenomenally frustrating trying to ascend that high, rewarding yourself with useful but bland upgrades like increased leadership, increased health or a paltry boost in weapon accuracy. 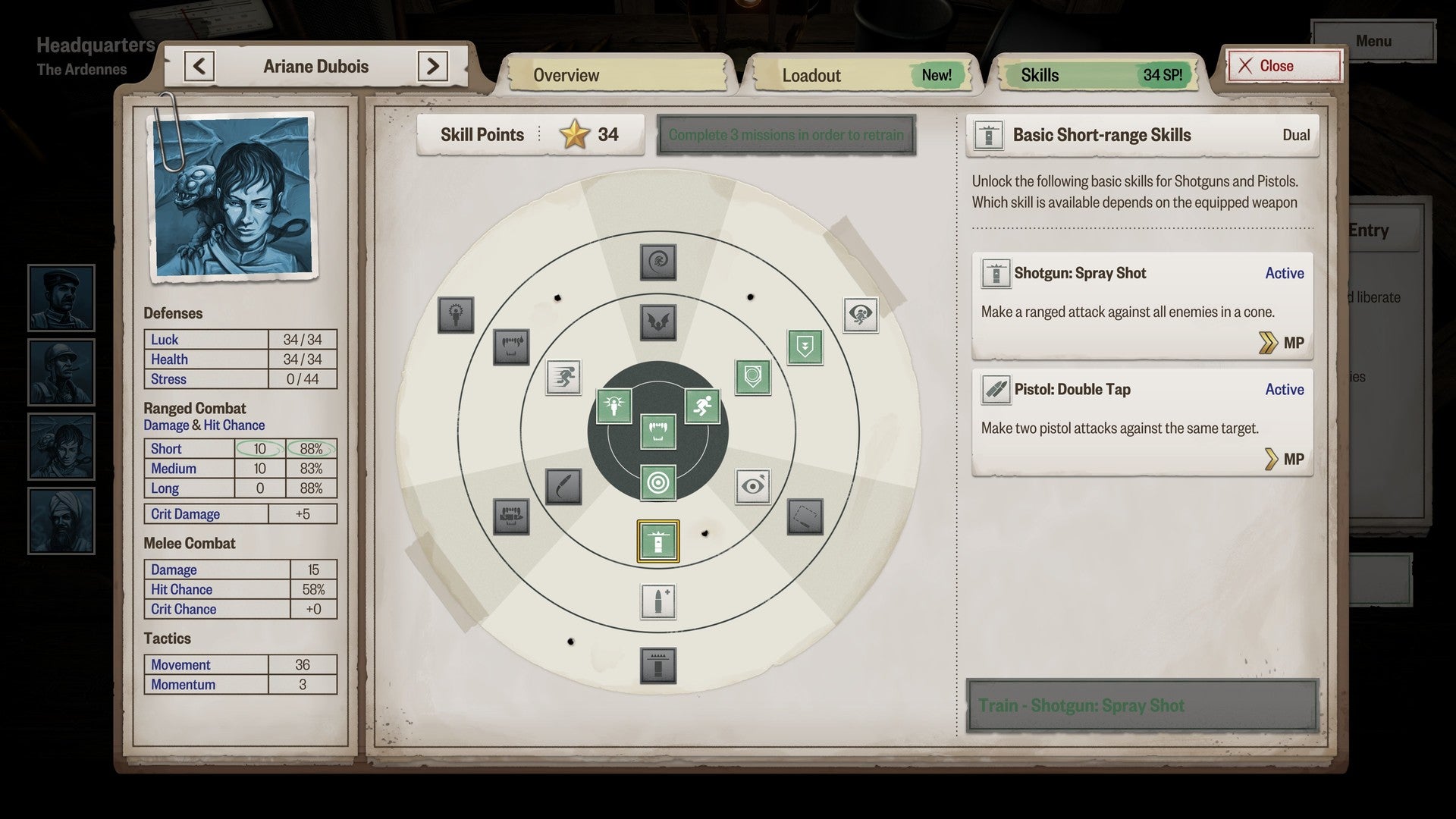 Pacing is one of the game’s biggest weaknesses. There are fun aspects to this game, but nearly everything is just a little too slow; whether that’s the treacly pace of combat, the slow drip-feed of item rewards for your troopers or the aforementioned upgrade tree. This doesn’t mean that the game is bad, necessarily, but it does mean that gratification here is somewhat delayed, and that won’t suit everyone.

A larger crime is the dull environments in the earlier levels. It’s a few tedious battles before you see anything approaching esoteric, and you’re mostly strolling through woodland, with nothing more interesting than a few low-grade Nazis to kill and a couple of logs to crouch behind. The game does get more interesting as it goes on, but the early game didn’t do a lot to endear itself to me until the first time things went sideways, charging me with holding a point against some summoned beasties, slurping and scrabbling in the darkness.

Then you’re hurled into weird landscapes, fighting off bizarre enemies on all sides. The game could have gone a little further into the weird perhaps, as you spend a lot of time fighting creatures that’ve been summoned and suited up in Nazi regalia, or the dreaded Shoggoth, which inspires a lot of fear starting out but doesn’t actually appear to do a lot in the way of attacking. Its lackadaisical approach to bringing you pain means it’s not dissimilar to being attacked by a sentient assault blancmange rather than a true horror from another world.

I wonder if this is part of the problem with trying to adapt the Eldritch mythos in a visual medium: these horrors are supposed to be unknowable, and by trying to make these knowable, these things are robbed of their impact somewhat. No one really wants to know that a Shoggoth looks like a ball of snot, and you can get around that in written form, but here it’s tough for it to have the impact it deserves, even if your soldiers get more stressed just for looking at the towering booger.

Achtung! Cthulhu Tactics is, honestly, a bit of a disappointment. It’s a perfectly competent tactics game, and there is a solid 10 hours of narrative here for you to explore. However, it’s mostly upsetting because of the flecks of brilliance that don’t quite fit together, and the good ideas that aren’t explored enough.

It’s hard to pinpoint exactly what holds Achtung! Cthulhu Tactics back, but there are a hundred tiny flaws that make it more frustrating to play than it should be. Regardless, when I look back at the game I’ll be thinking of the innovative flourishes: the Momentum system and the mechanical efficient of the Shroud, and I’ll think of the game that it could have been.

Achtung Cthulhu Tactics 2 might have been something special indeed, but this game doesn’t quite deliver, and that’s a shame.