What is the Acer Switch Alpha 12?

The Switch Alpha 12 is Acer’s attempt to create a Microsoft Surface rival. It aims to offer the same tablet-first convertible experience, but at a significantly more competitive £600 starting price. That makes it over £100 cheaper than similarly specified convertibles, such as the Galaxy TabPro S and Surface Pro 4.

The Switch Alpha 12 generally delivers solid performance and will meet most Windows fans’ tablet and laptop needs. However, issues with its touchpad, battery and a minor bloatware infestation make it hard to wholeheartedly recommend over moderately pricier competitors.

2016 has seen an influx of Surface Pro rivals. The majority of them are cut-down copies of Microsoft’s convertible and their only real selling point is a moderately reduced price tag. At first glance the Switch Alpha does little to change this trend.

The boxy all-metal tablet section’s silver-grey finish hardly exudes the same class you’d get from a Surface Pro. The attachable keyboard is also almost identical to a Surface Type Cover, which is a good thing.

This all may make the Switch Alpha 12 sound a little dull, but up close I noticed a few design changes that fix some of the Surface’s niggling flaws.

For starters the keyboard cover has a loop for the Switch Alpha 12’s optional stylus to fit into. This sounds small, but considering the hefty £40-plus that most active styluses cost, the loop’s presence is a serious bonus that makes it harder to misplace the pen.

The addition of a USB 3.1 port that can be used to power devices, transfer files or attach the device to an external monitor is another nice bonus. The accompanying full-sized USB 3.0 port makes the Switch Alpha 12 significantly better connected than many competing convertibles, which only have single USB-C ports, like the Huawei Matebook and Samsung Galaxy TabPro S. 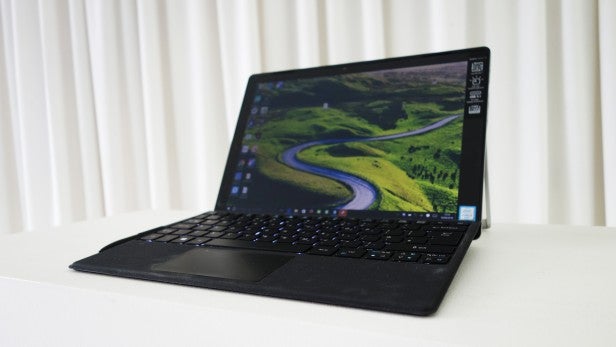 I’m also a fan of the Acer’s take on the Surface’s kickstand. The stand disconnects from the back and can be used to sit the device at a variety of angles. Many rivals only allow for two or three sitting angles, so this is a great ddition. It also has a grippy rubber bottom, which helps stop it sliding or moving when you’re using the Switch Alpha 12 on your lap.

Build quality is solid. After a week and a half lugging the Switch Alpha 12 in my satchel around London, the device remained scratch- and chip-free.

The Acer Switch Alpha 12’s configuration options are also generally in line with the Surface’s, outside of the use of an Intel Core i3, rather than a Core M CPU in its cheapest specification. Buyers can choose to load the device with a sixth-gen Intel Core i3, i5 or i7 U-series CPU and 4-8GB of DDR3 memory.

The lack of a 1TB storage option is a bigger issue for me. Acer’s only offering the Switch Alpha 12 with 128-512GB of SSD storage. This won’t be a problem for most people, but it will be an problem for people with large media libraries, or designers looking for a mobile touch-up station. I reviewed the basic Core i3 version with 128GB of storage and 4GB of RAM. 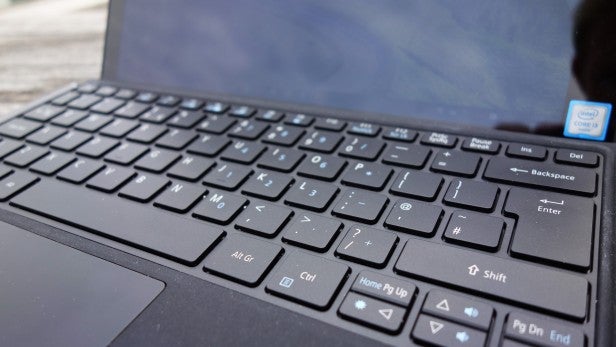 My only qualms with the Switch Alpha 12’s design stem from its slightly lacklustre keyboard dock.

First, the good: the backlit keyboard section is better than average. The keys aren’t as tactile nor as pleasant to type on as a proper laptop’s keyboard, but they’re miles better than the MateBook and Galaxy TabPro S’s attachable covers. Keys feel reactive and have reasonable travel, too. They’re also nicely spaced out, which makes it easier to comfortably type without making constant mistakes.

I’m less enamoured of the touchpad. The pad’s palm detection works well and it has a nice smooth finish. But the device features a horrid all-in-one design where the discrete right- and left-click buttons integrate into the main pad. This makes it all too easy to have the pointer go flying off your intended target when you try to click and drag.

Sensitivity for basic tasks is fine and the pad feels reactive, but its multi-touch abilities aren’t up to scratch. The touchpad struggles to recognise basic tasks like scrolling up and down using two fingers. All too often the pad wouldn’t recognise my commands, and would then inexplicably jump into action and enact every instruction I’d given it. The problem was intermittent but fairly annoying and would regularly cause chaos on spreadsheets or text files I was editing. 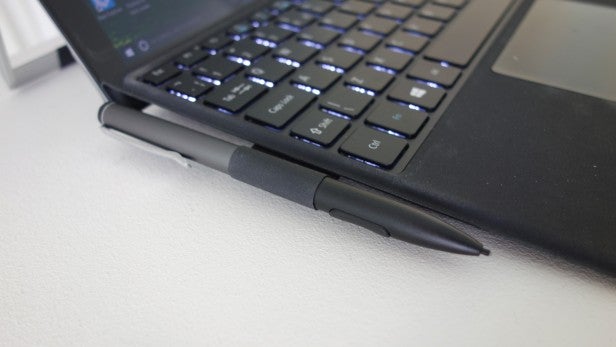 The Acer Switch Alpha 12’s 12-inch screen features some impressive specifications, on paper at least. The 2,160 x 1,440 resolution easily matches its key rivals, including the Surface Pro 4, and ensures text and icons are uniformly sharp.

To the naked eye colours are also solid and, thanks to the use of IPS screen tech, whites are nice and clean. I didn’t notice severe backlight bleed either. If all you want to do is watch Netflx, browse the web or doodle a few quick notes in OneNote, the screen is more than up to scratch.

However, more in-depth testing with a colorimeter revealed a few issues with the display that will put off some buyers. The 456.7nits max brightness is very bright, but the 0.56 black level gives it a distinctly average 795:1 contrast ratio. The 8,712k colour temperature is also well above the 6,500k ideal.

For regular folks who just want a tablet to watch Netflix, or a laptop to web browse, these figures won’t be a problem. The Adobe RGB coverage will, however, be a serious negative for professional artists and designers looking to take advantage of the Aspire’s stylus.

The inaccurate colours make the tablet a poor choice for editing photos or digital painting. A few years ago this would’ve been fine, but since the arrival of stellar tablets like the Galaxy TabPro S, there are better convertibles available for artists.

Hybrid devices generally offer pretty poor audio quality. The thin dimensions and focus on portability mean they always come loaded with tiny, generally underpowered speakers. This remains true on the Switch Alpha 12. The tablet section’s speakers are good enough for Netflix watching in bed, but it’s underpowered for pretty much everything else.

Maximum volume levels aren’t as high as the Surface Pro 4’s and rapidly become tinny when you try to play music on them. Being fair to Acer, though, they’re no worse than on most other Windows tablets and this is an issue I’ve encountered on close to all of the hybrids I’ve tested.

The front microphone is similarly weak, which is a shame as the front camera can shoot at 1080p. During video chats the person on the other end of the line struggled to hear me with even moderate background noise. The camera also didn’t perform as well as I expected. Even though it can shoot at 1080p, it struggles in even moderately dim lighting conditions. Recording on an overcast London morning the camera made me look like a member of the Walking Dead.