I reviewed the cheapest Intel Core i3 configuration of the Switch Alpha 12 with 4GB of RAM. This makes direct comparisons with other convertibles I’ve tested slightly tricky, as the Surface Pro 4 I reviewed had a Core i5 configuration and the Huawei Matebook and Galaxy TabPro S units we’ve tested ran using lower-power M chips.

The i3 model performed moderately better than the ultra-low-power Intel Core M devices during my synthetic benchmark tests.

The Switch Alpha 12’s lead continued on the PCMark Home test, where it scored 2,369, offering a slight performance boost on the Matebook, which scored 2,074. 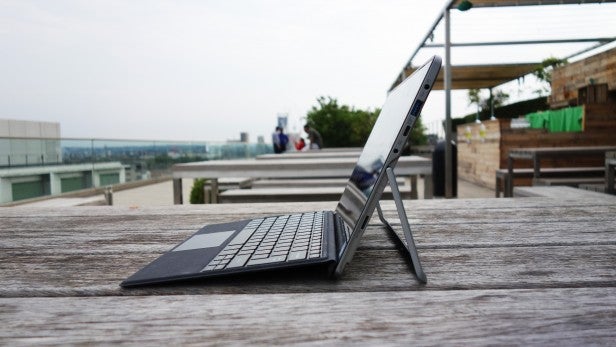 Intel HD graphics aren’t suitable for even moderately demanding gaming, but the Switch Alpha 12 managed to run Minecraft at a playable framerate during my tests.

The Switch Alpha 12 also performed admirably during my digital painting sessions. Despite the screen’s poor colour gamut coverage, the stylus is pretty good. The palm-detection tech isn’t the best around, but it’s good enough for basic sketching and I didn’t notice any latency when drawing onto the screen. The machine began to chug when I started trying to 3D model on the tablet section, but this was for a big project.

The CPU’s liquid-cooling system also ensured the device ran silently, through the back did noticeably heat up with prolonged use. Still, having no fan noise is a big boon.

My only serious performance issue with the Alpha 12 is its bloatware infestation. Acer’s loaded the Switch Alpha 12 with more unneeded and unwanted applications than you can shake a stick at. The moment you power up the device you’re bombarded with requests from numerous products. Lowlights include Acer Documents,  Care Centre, abFiles, abPhoto and McAfee security. The one piece of welcome software, HoverAccess for the stylus, doesn’t work properly.

Most of these offer superfluous clone services to those already included on Windows 10 and are nothing but an annoyance. Some will welcome the inclusion of McAfee, but I prefer to pick my security service provider and not have one pushed upon me, especially when the package is very aggressive and eats up memory and battery life.

Battery life is one key area where the Switch Alpha 12 fails to deliver. Even after I’d turned off McAfee and switched off all unnecessary processes, the device didn’t perform well during our Powermark battery burn. This involves synthetically looping 10 minutes of web browsing and 5 minutes of video playback with the screen brightness set to 150nits.

With all the superfluous processes turned off, the device generally lasted 5-6 hours before dying. The score isn’t terrible, but that puts it well behind competing M-powered hybrids such as the Galaxy TabPro S, which usually last at least 7 hours.

Running McAfee and other background apps the Switch Alpha 12’s battery dropped dramatically and it only lasted 4 hours running the Powermark test.

Real-world use reflected the below-average battery performance. Streaming video on Netflix with brightness at 75% the device discharged 15-18% of its charge per hour. Using it as my primary work machine the Aspire Switch 12 needed to be reconnected to the mains at around 3.30pm, having been first switched on at 9.30am. 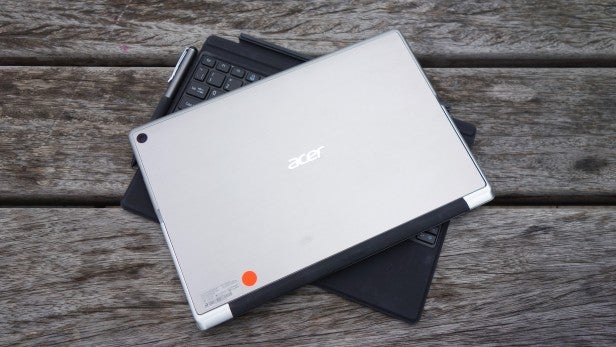 Should I buy the Acer Switch Alpha 12?

If you’re after a Surface Pro 4, but don’t have quite enough cash, then the Acer Switch Alpha 12 is a solid choice. The basic Intel Core i3 model I reviewed offers fantastic value for money. For a modest £600 Acer’s offering the main tablet section plus an attachable keyboard and active stylus – two add-ons for which most companies charge as much as £150 extra.

If you’re determined to get a Windows convertible, the Acer Switch Alpha 12 is one of the best semi-affordable options available. Its overall appeal is let down by two crucial points, however: its poorly calibrated screen and below-average battery life.

The screen is more than sharp enough for regular use, but its poor colour gamut coverage makes it ill-suited to even basic design, painting or photo editing. The use of an i3 processor rather than the more power-efficient M chip, and the addition of power-hungry bloatware, also mean it won’t last a full working day off one charge.

The Surface Pro 4 remains a better choice for buyers who can afford it. Those on a shoestring budget who need a device now would also be better off checking out Microsoft’s older Surface 3, which can be picked up for as little as £400, but doesn’t come bundled with a Type Cover and you’ll have to make do with an anaemic Intel Atom processor.

There are also a number of great-looking convertibles set to arrive in the near future, such as the Asus Transformer Pro 3. So buyers who aren’t in a rush may also be better off waiting and seeing how these compare before handing over their hard-earned cash.

A great-value convertible, slightly let down by poor battery life and a badly calibrated screen.