What is the Acer Liquid E3?

The Acer Liquid E3 is a 4.7-inch Android smartphone and the latest member of the mid-range E Series. A follow-up to the underwhelming Liquid E2, the sub-£200 successor makes big improvements in the display and processor departments. Its biggest new trick is a front-facing camera with an LED flash to entice selfie-lovers. Whether that’s really enough to pull it off the shelves instead of a Moto G or an Xperia M2, we are not entirely convinced.


There was a time when mid-range phones could get away with uninspiring design: that’s simply not the case anymore. Thanks to handsets like the Xperia M2 and the Moto G, we expect a little more. This can only be a good thing and while the Liquid E3 is certainly a well built handset, it’s a far more serious affair. It’s just not as exciting or as sleek as something like the M2.


It’s plastic around the back with a gentle curve making it more comfortable in the hand. Measuring in at 8.9mm thick, it’s not that much slimmer than the Liquid E2 and also drops down 134g, so it’s far from a heavyweight. Volume rocker and standby buttons are well within reach and the one new design quirk is a back button or AcerRapid button. Joining LG in the quest to keep buttons out of sight, you can assign different apps for quick access, though it’s a lot less prominent than on LG handsets. 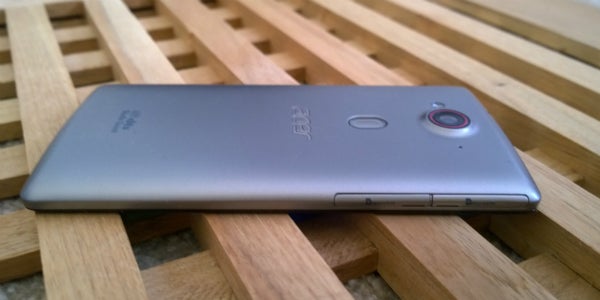 Elsewhere, there’s familiar Android phone characteristics like the black screen bezel, that’s thinner down the sides, soft touch buttons below the screen and camera sensor around the back. The speakers are now upfront above, which is a good move if you don’t want to muffle audio. One problem however, is that the gap between the bezel and speaker is a haven for trapping dust and dirt.


You still get a micro SD card slot, which is necessary when you only have 4GB of storage to play with. The back is no longer removable, however, so the battery is going nowhere and there’s dual SIM card support for seasoned business travellers. 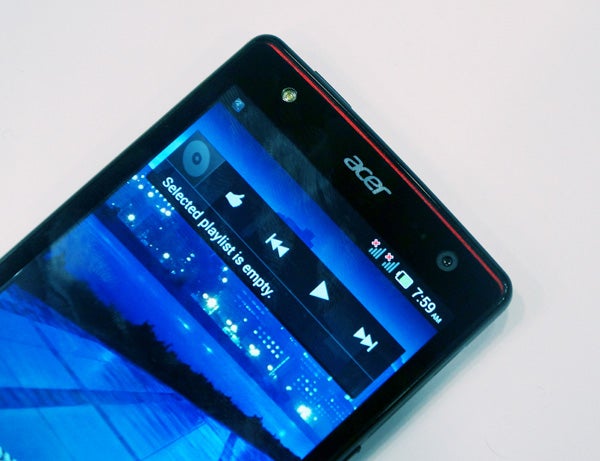 720p HD displays are now setting the benchmark for sub-£200 phones thanks to the Moto G, so Acer has upgraded from a 960 x 540 display to a Moto G-matching screen.

It squeezes in 312 pixels per inch (ppi), which means it’s more or less as sharp as the 326ppi iPhone 5S — a phone that costs more than twice as much. That’s spread across a 4.7-inch screen, a similar size to the HTC One Mini 2 and just shy of the 4.9-inch Nexus 5.


The lack of a Full HD 1080p, which does appear on the more expensive Liquid S2, is no real surprise considering the price. And it’s a very decent display, overall. Text looks sharp, it handles video well and games look good. You’ll see brighter and more vibrant screens on more expensive phones, but for the money it’s good.

The only slight disappointment is that, unlike the Moto G, it doesn’t use Gorilla Glass 3. This means it’ll be more prone to scratches and scuffs.