There are few surprises in the Acer’s specification. A 1.7GHz Core i5-4210U processor is exactly the kind of chip we expect in a mid-range portable, and it’s accompanied by 4GB of memory. That’s the same processor as the HP, and a step ahead of the Pentium and Atom chips inside the Toshiba and Asus systems.

Despite the similar hardware the Acer comfortably beat the HP machine in benchmarks. In PC Mark 7’s test the R13’s result of 4,840 points was around 2,000 points more than the HP, and the Acer’s Geekbench score of 5,213 is similarly impressive – the HP stalled at 4,887.

It’s a good start and, suffice to say, the R13 was even further ahead of its other two rivals. The Asus could only manage 3,104 in Geekbench, and the Toshiba was even slower. The Acer’s Core i5 chip is handy for web browsing, multi-tasking and moderate work tasks, but tougher software will require better hardware. 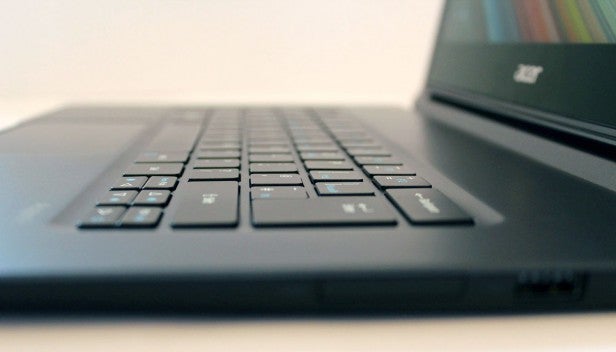 The modest Core i5 chip only has Intel’s HD Graphics 4400 chipset, which means gaming potential is limited – in the 3D Mark Ice Storm test the Acer scored 43,954. It’s a long way ahead of the Asus and Toshiba machines and around 8,000 points beyond HP, but it’s still only enough power to play low-end titles rather than the latest triple-A releases.

The R13 impresses with storage speed, too: the Acer’s 128GB SSD hit sequential read and write peaks of 473MB/s and 309MB/s. They’re both far faster than the speeds of the mobile hard disks inside rival machines, and they mean apps open rapidly – and that the R13 boots in less than ten seconds.

The SSD does have a downside, though, which is a lack of space. When formatted and saddled with Windows 8.1 the drive only has about 70GB free – a far cry from rivals, which have hard disks between 500GB and 1TB in size.

We didn’t have any heat or noise issues when running low-end tasks with the R13, but the Acer disappointed when we loaded stress-tests. With the processor running at 100% the internal fan produced a constant, modest whine. It’s not loud, but it was noticeable in our quiet office, and it’s a poorer performance than rival machines, which could only be heard with our ears pressed to the enclosure, if at all.

The processor’s top temperature of 72 degrees is fine, and only a little heat made it to the outside of the case – so all that fan noise is at least somewhat justified. 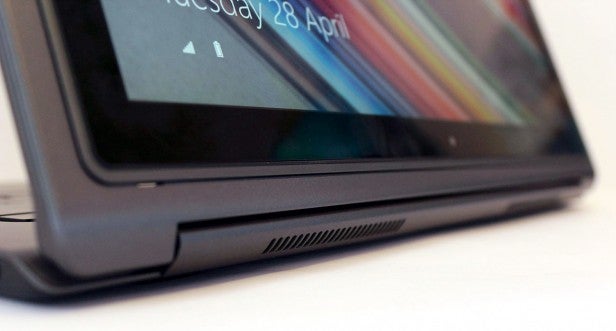 The Acer has a 48Wh battery. The R13’s base panel can be removed to access the power pack, but it’s behind more than a dozen screws – this is clearly a unit not designed to be replaced.

In our standard battery test the R13 lasted for seven hours 37 minutes. That’s a reasonable timespan: almost two hours beyond the Toshiba and more than an hour longer than the HP managed. The Asus proved better, but not by much – about thirty minutes.

It’s a reasonable result, but you’ll only get a full day’s use from this machine if you tone down the screen brightness and run very low-impact applications. To be fair, that’s no different from the Asus, despite its better benchmark result. 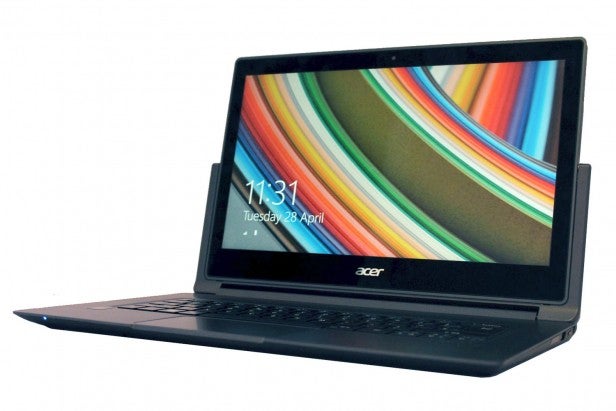 Should I Buy the Acer Aspire R13?

Acer deserves praise for trying something new with the R13, but the rotating screen and tilting hinge don’t add much – the extra positions don’t bring much to the table when compared to more conventional designs, and the mechanism means the Acer’s body doesn’t look as good as rivals.

It’s slimmer and lighter than competitors, but it’s hampered by its width and undermined by detachable devices that cut their bulk in half.

The inconsistency continues elsewhere. The internals are good, the screen has more quality and resolution than rivals, and battery life is reasonable – but the fan noise can be irritating and the keyboard isn’t much cop.

This is a flawed machine, but its rivals are worse still, with poorer performance, lower-resolution screens and similarly disappointing keyboards. The R13 is the best of a mediocre bunch – if you want a mid-range hybrid, this is a contender.

Still considering a new laptop? Click here to check out our latest reviews, or have a read of our selection of the finest Windows 8 laptops, hybrids and PCs.

Acer has taken a punt on a new design for this hybrid, but the rotating screen is a mixed bag: its extra positions don’t add much to the experience and, while this machine is thinner and lighter than rivals, it’s wider and has iffy aesthetics. It’s inconsistent elsewhere too with reasonable core specs, battery life and a good screen, but a poor keyboard. It’s got issues, but it’s the best mid-range hybrid available at the moment.