What is the Acer Aspire R13?

Acer’s latest hybrid is a new twist on the vertical flipping screen type of device that we first saw with the Dell Inspiron Duo. A largely neglected format, instead of a central pivot point like on hybrids of old, or a 360 degree screen hinge like on the Lenovo Yoga the display instead is mounted on two arms and spins about its mid point.

The advantages are that it’s potentially sturdier than a central pivot style device and it means you don’t end up with the keyboard left exposed when in tablet mode like on Yoga-style devices. It also means you don’t have the top-heavy design compromises of detachable hybrids. The question is whether it adds up to a useful device, or is there a reason it’s the least popular style of hybrid.

Acer dubs the R13’s convertible system the “Ezel Aero Hinge”, and is has six different positions. The screen folds flat to transform from a laptop to a tablet, and halting the screen half-way enables what Acer calls the “Ezel” position: a laptop-style mode with the panel pitched forward, a couple of inches closer to the user – a modest change that makes little difference to usage. 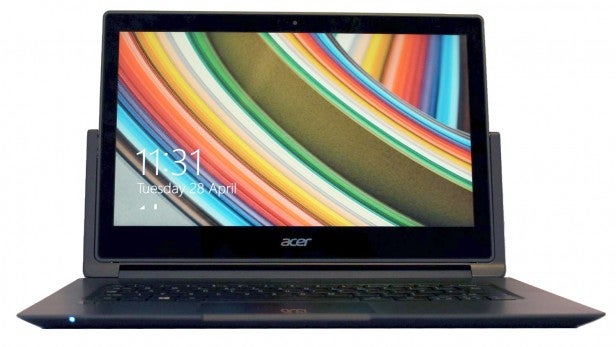 Tilting the screen further forward, to a shallow angle, enables the Stand position. The two remaining options are hybrid staples; flipping the screen in its hinge enables it to face outwards in Display mode, and Tent mode (balancing the laptop on its front edges) can be used for watching movies.

The moving screen and arms allow for extra flexibility when compared to most hybrids, but almost all of the Acer’s positions can be replicated by other machines, and the rarer Ezel option doesn’t add much value – all it does is move the screen a little nearer.

The chief advantage is that can achieve all these modes without having the keyboard become the base/back of the device, where it’s more susceptible to damage. Depending on how you tend to treat your devices this will either be a a significant plus or a none event.

The R13’s design is inconsistent elsewhere. The width of the screen makes it tricky to use this machine as a proper tablet. It’s also unusually wide for a 13.3in device, at 344mm – the Acer’s nearest rival, the Toshiba Satellite Click 2 L30W-B-10D, is 15mm narrower.

Other practical niggles lurk too. The screen can be tricky to pop out of its frame, and the whole device is a tad top-heavy; push the screen beyond 90° and the base lifts from the desk. The lid also lacks a decent lip for opening, and there’s no Windows button in the thick screen border, which makes tablet mode a little trickier.

There are aesthetic issues too, although these are less serious. The Gorilla Glass lid looks slick, but it’s a fingerprint magnet and the hinges only extend half-way up the panel, which leaves the top half of this machine looking blocky and unfinished. The gunmetal grey bottom half is better, but it still doesn’t have the slick cohesion of some other machines.

It’s a shame the Acer is broad and ungainly, because in other categories it outpaces the competition. Its 1.5kg weight undercuts the Toshiba by over half a kilo, despite the Toshiba having the same screen width. It’s also lighter than two 15.6in rivals: the Asus Transformer Book Flip TP550LA weighs 2.6kg, and the HP Envy 15 x360 tops out at 2.4kg. 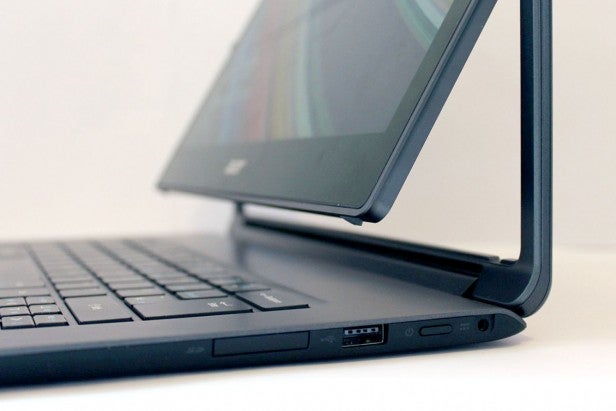 It’s slimmer, too: its 18mm body undercuts those three competitors by at least 5mm. What’s more build quality isn’t compromised, despite the slimness.

External connectivity is fine, with two USB 3.0 connectors, an HDMI output, headphone jack and an SD card slot, but the Acer is less inspiring on the inside. The wireless card is dual-band but doesn’t connect to the 802.11ac standard, and there’s no Bluetooth or Gigabit Ethernet.