Big and tough – two words that seem to go hand in hand. Whether you’re talking about that bloke in the tuxedo standing outside your local nightclub or an armoured personnel carrier, big and tough just seems right. But for every rule there’s the exception and the ToughBook CF-18 is that exception – although small and tough just doesn’t seem to roll off the tongue quite so well. 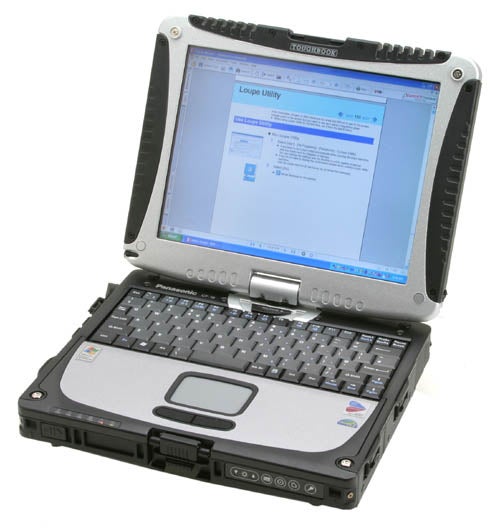 If you read my review of the ToughBook CF-29 you’ll already know that Panasonic’s ToughBook range addresses the needs of a certain type of notebook user, a user that needs to be able to use their notebook in the most extreme conditions. Like its big brother, the CF-18’s case is constructed from magnesium for ultimate durability and shock resistance, while the shock-proof hard disk enclosure should ensure that you don’t lose any data no matter how hard you treat it.


The CF-18 can withstand a drop impact from 90cm, which should cover most instances of it being knocked off a table, dropped out in the field or just generally abused. To make things harder for the little CF-18 we drop tested it with the screen facing outward, since many users will be carrying it this way. As you can see from the animated GIF below, the CF-18 takes quite a tumble, but I can assure you that it survived intact – in fact I’m writing this review on it.

Despite being able to withstand this kind of abuse, the CF-18 is, as already mentioned, small. Measuring just 271 x 216 x 49mm (WxDxH), the CF-18 should be able to slip into pretty much any bag or backpack. Also, weighing just 2.1kg, it’s not going to weigh you down too much either. Although the target user for a ToughBook is obviously going to rate durability and shock resistance as paramount, it’s good to see that Panasonic has still managed to produce a machine that’s small and light.

Of course the CF-18 isn’t just shockproof, it’s also resistant against water and dust ingress. Every single port and connector is protected by a flap with a waterproof rubber seal. The hard disk, battery and SD/PC Card Slots are secured with rubber sealed hinged doors complete with a double locking mechanism. The upshot is that if you find yourself caught in the dessert or a torrential rain storm, you can happily carry on working on your ToughBook without fear of it grinding to a halt.

Because of the CD-18’s smaller dimensions, it doesn’t have the solid metal carrying handle that the CF-29 has. Instead there’s canvas carrying strap which feels pretty sturdy – not that it matters if it snaps and the notebook drops to the floor of course. It does still have a solid metal catch that secures the lid in place, giving the CF-18 a suitably industrial look and feel.


Once you release the catch and open the lid you’ll realise the keyboard has had to suffer in order to keep the size down on the CF-18. Although the keyboard has all the necessary keys on offer, they are very small indeed and I fear that many potential users would have a lot of trouble typing on this machine. Personally I found the keyboard a bit of a challenge at first, but once I’d got used to the dimensions I found that I could type at pretty much full speed. One thing that does annoy me about the keyboard though, is that the cursor keys are laid out in a bizarre configuration to save space. 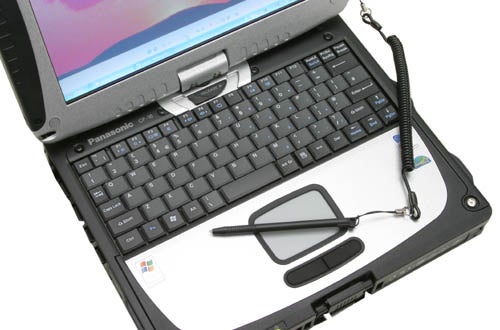 Of course the majority of ToughBook users aren’t going to be using their notebooks for writing copious amounts of text, so even for someone with large hands the small keyboard might not be too much of an issue. Most large companies that hand out machines like this to the mobile workforce will be preloading them with custom applications, rather than office suites.

Below the keyboard is a touchpad with two selector buttons below it. The touchpad is pretty good quality, but I haven’t really bothered using it, because like the CF-29 before it, the CF-18 has a touch screen.


I was never really convinced of the benefits of touch screens until I reviewed the CF-29 – now I’m totally sold on them. It’s so handy just being able to tap icons on the screen and even drag windows around using your finger. That said, the 10.4in screen on the CF-18 makes using your finger for tapping and dragging a bit trickier than it was on the CF-29. But Panasonic has thought of this – there’s a stylus hiding in the bottom left corner of the screen allowing for more delicate touch screen manipulation. There’s even a coiled tether strap that attaches to the stylus at one end and the lid at the other, so you never lose the stylus no matter how rough things get. 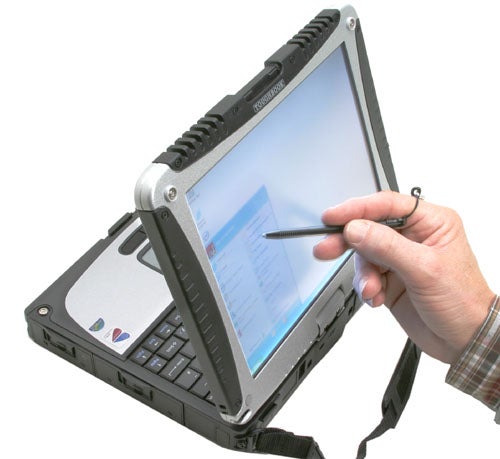 On the right side of the chassis you’ll find two lockable hinged doors hiding the hard disk enclosure and the battery. The front is pretty barren apart from the sliding power switch, although a nice touch is the buttons to adjust the brightness of the screen. 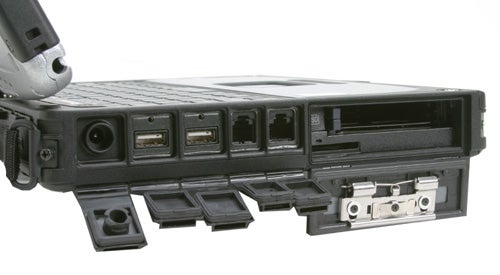 Where the CF-18 really differs from the CF-29 is the fact that the screen can twist around and lay flat against the keyboard, creating a tablet format. The Digitizer version of the CF-18 ships with Windows XP Tablet PC Edition, but this touch screen version ships with standard Windows XP Pro. Panasonic has installed its own screen rotation application, so you can use the CF-18 in either landscape or portrait modes. 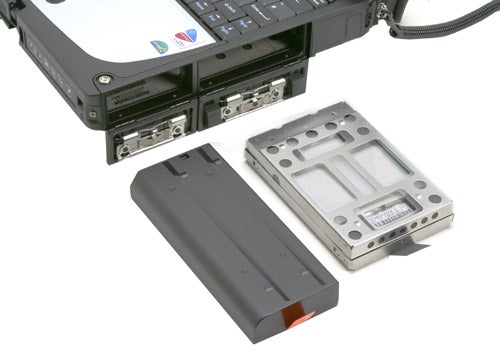 Specification wise you’ve got a 1.2GHz ultra low voltage Pentium M backed up by 512MB of RAM – only 504MB is actually available since the Intel integrated graphics grabs 8MB. There’s a 60GB hard disk, but no integrated optical drive – another sacrifice that has to be made for the small dimensions. 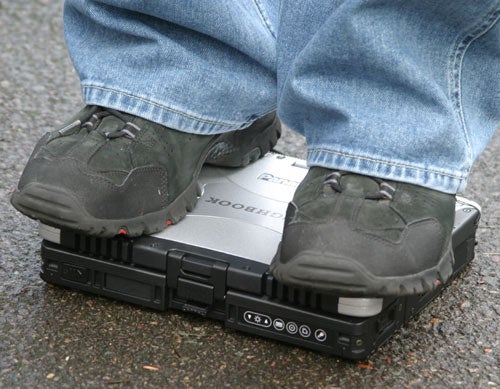 You’ll have no problem getting connected when you’re out and about, with integrated 802.11a,b and g supported. There’s also integrated Bluetooth 1.2 in case you want to use your phone to get connected. That said, you can get specify the CF-18 with a GSM/GPRS module for cell based connection without the need for a phone. Like all Panasonic ToughBooks, you can specify a bespoke build if you’re purchasing over 100 units.


Unfortunately I couldn’t get the CF-18 to complete a SYSmark run, but that’s not necessarily a criticism of the notebook – SYSmark does just randomly refuse to run sometimes. However, Mobile Mark did run and the result was impressive to say the least – the CF-18 turned in a battery time of over six hours! With a notebook like this battery life is going to be paramount, since the user is going to be out in the field for extended periods of time. 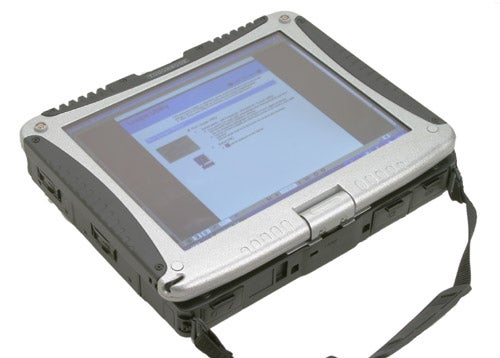 As with all ToughBooks, the CF-18 doesn’t come cheap – £2,453.40 including VAT to be precise. But the cost of a machine like this can’t be compared to standard notebooks, because you only buy a ToughBook if you need a ToughBook. If all you’re doing is carrying your machine to the office and back, a ToughBook will be a bad investment. But if you’re working outside in the rain, snow and dust then the initial purchase cost of a ToughBook is your secondary concern.


The CF-18 is proof that a fully rugged notebook doesn’t have to be big and heavy. This little machine is every bit as tough as its big brother. The portrait mode might be useful for some users and it’s weight and dimensions will make it less of a burden if you have to trek around with it in your backpack all day. That said, unless you desperately need the rotating screen and tablet functions of the CF-18, I’d say that the slightly more expensive and larger CF-29 is a better bet – the larger keyboard and screen will make use in extreme conditions just that bit easier.