This is what Windows 10 Mobile will bring to Lumia smartphones

Windows Phone will soon be no more as Microsoft ushers in Windows 10, the operating system it hopes will truly unify the experience across phones, desktops, tablets, laptops and pretty much anything else you can think of that is capable of running the latest version of Windows.

Early builds of Windows 10 for phones have been available to Windows Insider members since February, and we’ve played with the latest Windows 10 for phone build. It’s also going to launch on the new Lumia 950 and 950 XL smartphones, which launch in October.

For the finished version, you’ll have to wait a little time yet before your Nokia Lumia 930 is running on it, but the good news is that Windows Phone 8.1 users will be able to upgrade to Windows for free when it does arrive.

We’ve picked out some of the key Windows 10 Mobile features for phones that Microsoft hopes will change the way you use your handset when it launches later this year.

Voice dictation on the keyboard

Microsoft says it’s pretty happy with how the current stock Windows Phone keyboard works, but is promising to make some tweaks. The most notable new change is support for voice input, which can be accessed from a little microphone just above the main keyboard. This will allow you to reply to messages and will even be able to recognise details within those replies like names and can even hashtags.

Unsurprisingly, Microsoft is promising richer Skype integration on Windows 10 for phones and it’s all to do with messaging. Although the feature will not be available in the latest build of Windows 10, users will have the ability to unify Skype conversations within the main Messaging app. So, no more jumping in between apps basically.

Action Center started life on Windows Phone before making its way to the desktop version of Windows and now it’s being improved with a fresh, new look and refined features like the ability to dismiss notifications across all Windows 10-running devices.

This is going to be one of the biggest changes Windows 10 users on smartphones can look forward to. A set of Microsoft’s core apps that work more like they do on desktop, tablets and laptops.

First up is Office. While Microsoft will still be delivering 32-bit versions of its Office applications, it’s also introducing touchscreen-optimized versions of Word, Excel and PowerPoint. Smartphone features like Miracast will be supported, so you can send content to a compatible TV, while there’s also support for wireless printing. 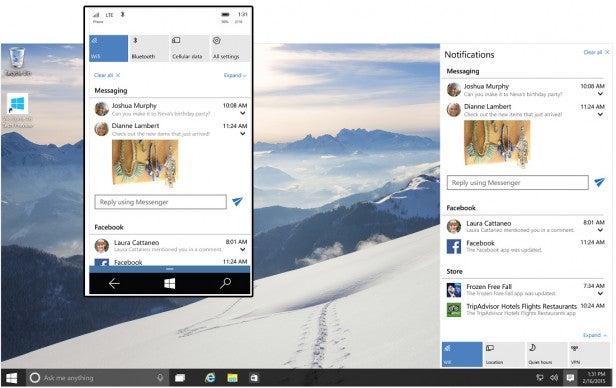 There’s more universal Windows apps to look forward to as well. Outlook will get the more unified treatment too, allowing you to pull through emails and calendars with a consistent user interface across all devices.

Microsoft also introduced a new Photos app, which works alongside OneDrive and supports some basic image editing. Albums can be automatically created detecting places and people and grouping them together. Those albums are stored in the cloud, making it easy to share them with other Windows users.

The People app aggregates all the people you care about in social networks to make it easier to make contact, Maps offers strong Cortana integration and will remember where your car is parked, while the new Music app will offer Google Play-style locker so you can store all of your music in OneDrive and access it from any device.

Previously known as Project Spartan, Microsoft’s new web browser uses a new rendering engine to help it play much nicer with the web than previous versions of Internet Explorer.

The most notable new changes include a note-taking mode where you can scribble on web pages with a stylus or your finger or even make comments through Microsoft Word integration. You’ll also be able to share or save web pages to social networks or applications like OneNote.