It has been a long time since we have said this but, Windows Phone finally has a new phone that should, hopefully, be able to stand toe-to-toe with the iPhone 6S, the Samsung Galaxy S6 and the rest of the Android phone elite.

Both the Lumia 950 and the 950 XL are the first devices to ship with Windows 10, and they’re certainly impressive on paper. Only time will tell though whether or not they can elevate Windows to another level.

But, what’s different about these two devices, beyond the extra letters at the end of the name? Let’s have a closer look and see.

Related: Why Continuum is the killer Windows 10 Mobile feature 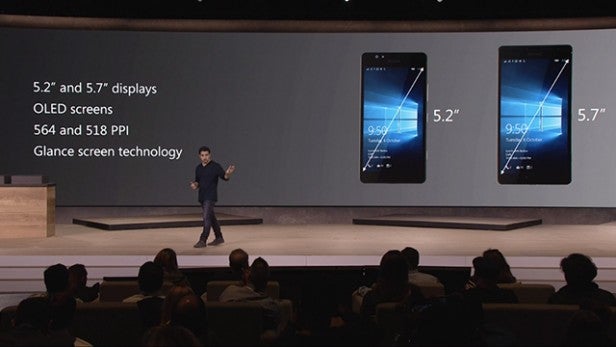 As the name implies, the XL is much bigger

The biggest difference between the two is pretty obvious. The XL is the bigger of the two phones. In a similar route to both Apple and Samsung have taken, Microsoft is releasing pretty much the same phone in two distinct sizes – one with a 5.2-inch display and the other with a 5.7-inch version.

Unlike the two iPhones, which both boast different resolutions, the new Lumias each pack impressive sounding quad-HD OLED panels with 1440 x 2560 resolutions. As it’s smaller the regular 950 has a much more pixel dense display, though we expect both these screens to be gorgeous.

This marks the first time a Windows Phone device has had more than 1080p display. But, it’s not the first time Microsoft has done an XL device as it released both a 640 and a Lumia 640 XL earlier in the year. 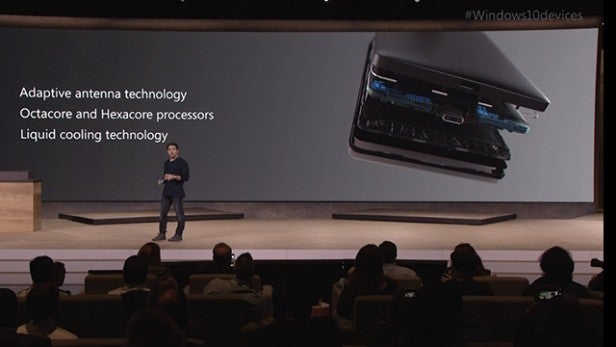 The Lumia 950 XL has a slight processor boost, but these are two powerful devices

There is, however, a bit more to separate both these phones than the screens that sit on the front. Each has a different processor inside, the 950 has a Snapdragon 808 while the 950 XL has the slightly beefier, though often controversial, Snapdragon 810.

Both of these are 64-bit chipsets, though the 808 runs on six cores as opposed to the eight cores on the 810.

It’s important to note that the Snapdragon 810 processor used in 950 XL is not the troublesome one that sits inside the frankly awful Sony Xperia Z3, but the updated version 2.1. This chip doesn’t seem to suffer from the overheating problems and it currently powers the OnePlus 2 and the upcoming Huawei Nexus 6P. Nothing to worry about here, folks.

Both devices will also have 3GB RAM, which seems an ample amount for Windows 10.

In previous versions, Windows ran exceptionally well even when the hardware was slightly more reserved, so we have high hopes that this will be a great performer.

32GB of internal storage is standard across both, and while it’s odd not to see a larger 64GB (or even 128GB) option available, there is thankfully a MicroSD card.

Related: Everything you need to know about Windows 10 Mobile 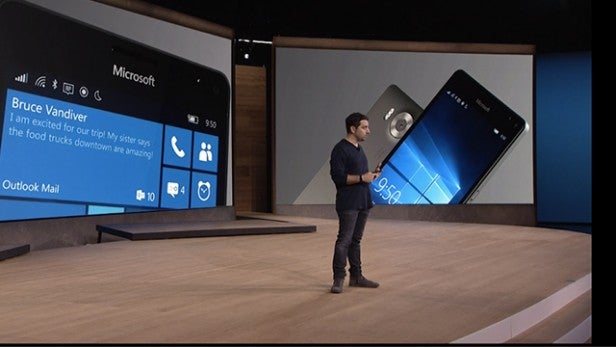 The last big spec difference between the two Lumia devices is the battery that sits inside them.

Firstly, it’s great to see Microsoft has kitted both of these out with impressively large batteries. Even the 3,000 mAh cell on the smaller 950 is on-par with the much larger Samsung Galaxy Note 5, and as that lasts a day we can expect the 950 to push easily into day number two.

We’d also predict the battery inside the 950 XL should last about the same amount of time. Yes, it’s bigger, but that larger display and more powerful processor will no doubt chew through juice quicker. We won’t know for sure though until we get these in for review.

To go along with those large batteries you’ve also got support for USB-C – just like the latest slew of Nexus phones – and Qualcomm’s rapid charge tech so even when you do hit the red, it won’t take long for the phones to juice up again.

Finally, the impressive battery tech packed into these phones is topped off with Qi wireless charging, a feature that been a staple on Lumia phones for a while. 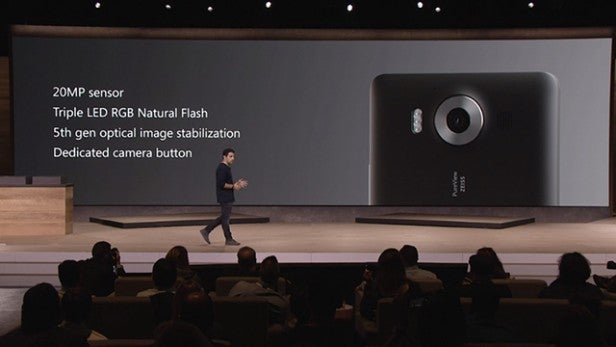 Both have an impressive sounding pair of cameras

Cameras have long been one of the finest aspects of Lumia phones, so it’s no surprise to see both the 950 and 950 XL coming with impressive sounding optics.

It’s also nice to see both phones get the same specs here.

On the back you’ll find a 20MP PureView Zeiss camera with OIS and an f/1.9 aperture – meaning it should be great at capturing low-light snaps – and a triple – yep, three – RGB flash. There’s a dedicated shutter button too, a touch we love.

Selfie lovers are taken care of too. Both new Lumias have a 5MP wide-angle lens on the front and video footage can be captured at 4K.

Fingerprint scanners have finally hit the big time on phones, with Apple’s TouchID 2.0 and Google’s Nexus Imprint leading the charge. On Windows 10 Mobile though, it looks to be a different story. At least for the Lumia 950 and 950 XL.

Instead of a fingerprint sensing pad on the back or baked into the home-button, Microsoft has included an iris scanner for unlocking the device securely. This scanner works with Windows Hello – a Windows 10 feature that requires an Intel 3D Sense on desktop – to bypass the lock-screen by taking a scan of your eyes.

Unlike similar unlocking solutions on Android, Windows Hello can’t be fooled by a picture as the IR sensor actually captures an imprint of your eyes. 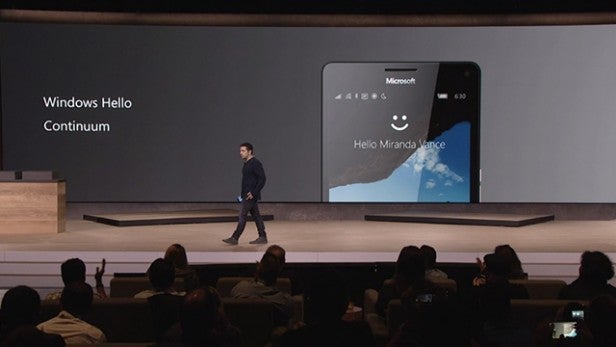 It certainly sounds cool and futuristic, but we’re still unsure about how it will work in real-life situations. How fast will it be? Will it work in less than perfect lighting? How accurate is it?

Another equally cool feature debuting with both the Lumia 950 and 950XL is Continuum. Originally shown off earlier in the year, Continuum lets you turn your phone into a sort-of mini PC. Just connect it up – either wirelessly or with the new Windows Display Dock that’ll go on sale alongside the phones – to a monitor, attach a keyboard and mouse and the Lumia 950 becomes a Windows computer, complete with desktop styled apps.

In a mobile space where there’s little to really set devices apart – aside from the OS they run – nifty new features like Continuum really help the Lumia 950 stand out from the crowded pack. How will work in real life though, is something we’ll wait and see.

Early Verdict – Little to separate these two devices, aside from size

As you can probably tell, there is little to really separate these two devices and choosing between them really comes down to one thing – size. If you want a smaller phone, there’s the 950 while those who like things a bit bigger can pick up the 950 XL.

Yes, the larger model does have a slightly faster processor and a marginally bigger battery, but in most areas – notably RAM, camera, and overall features – these two Lumias are the same.

And that’s great. For too long have smaller phones been seen as inferior to the larger ones and saddled with lesser specs. Microsoft has put both of the new Lumias on an equal footing and that gets the thumbs-up from us.