The minds behind Gmail create a potential Gmail killer

But wait – hasn’t Google already got an email app? Yep, and the Gmail app is one of the best at what it does.

Here’s the thing, though: what Gmail does – what EVERY traditional email service does – isn’t as useful as it used to be. In an age where we’re bombarded with emails from all quarters, email has stopped being a tool and has started to become a chore – something to slog through in a bid to sniff out what you actually want and need to know.

Apps like Mailbox have proposed an answer to this problem. Google Inbox is another solution.

So what is Google Inbox, exactly?

It’s Google Now meets Gmail with a hint of Mailbox

That’s a bit of an oversimplification, but essentially Google Inbox combines the functionality of two of the company’s biggest pieces of software plus one of the Gmail app’s big rivals.

It takes the raw email materials from Gmail and sorts them all out in a spookily helpful, proactive Google Now kind of way.

Inbox also allows you to ‘snooze’ your mails, instructing them to make themselves known at a later, more convenient or appropriate time. That bit’s pure Mailbox. 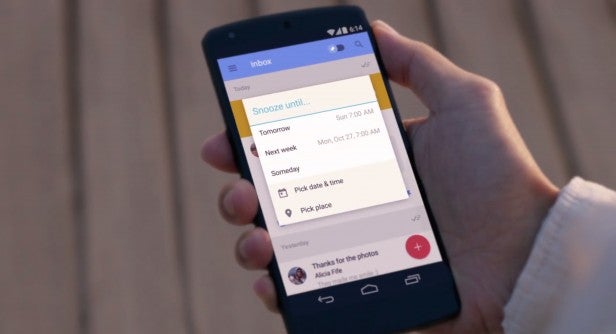 Last year, Google added a feature to Gmail that sorted your inbox (with a small ‘i’) into category tabs in an attempt to manage the sprawl.

This was a nice thought, but it felt a bit like a half-measure. Inbox looks to see this concept through to something like completion with Bundles.

All of your purchase receipts, promotional emails, and travel itineraries are grouped together in their own ‘bundle,’ and can be expanded or dismissed accordingly. You can even create your own bundles to have certain emails placed into their own dedicated sections. 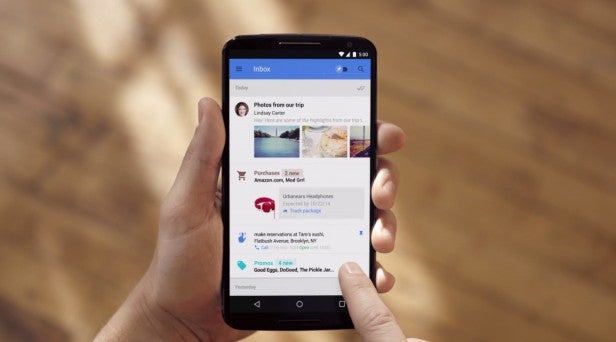 One of the biggest time sappers with traditional email is going through each individual email. Even when you’re flicking through rapidly in some kind of preview mode, you’re still having to assimilate the whole email to a certain degree.

Inbox addresses that issue by smartly creating a highlight for each email. This means placing image thumbnails and attached documents as part of the initial entry, as well as things like reservation details, dates, and other updates.

Combined with bundles, it’s all about providing, useful, glanceable information with all the flab trimmed away (or at least hidden from view). Yep, just like Google Now.

Also reflecting Google Now, Inbox will decipher the key information in your emails and provide relevant information and command shortcuts to help you act on them.

For example, when a restaurant reservation confirmation comes through, Inbox will add a map to it. Similarly, fight confirmations will see a check-in shortcut added. 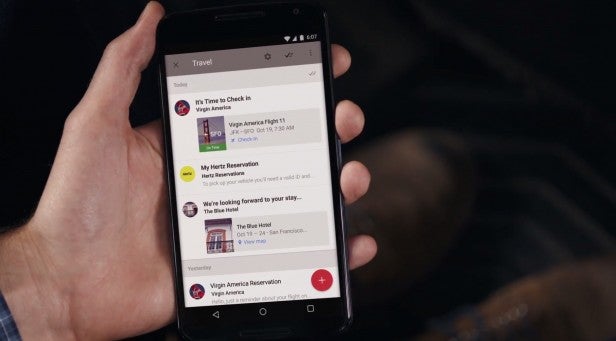 One of the more unusual twists to Google Inbox is that it also serves as a reminder app. You can literally type in your own reminders, just like the Google Now system. What’s more, Inbox will provide Assists for those too.

Set a reminder to make a restaurant booking, for example, and Inbox will tell you if it’s open and will also dig out the phone number for you. 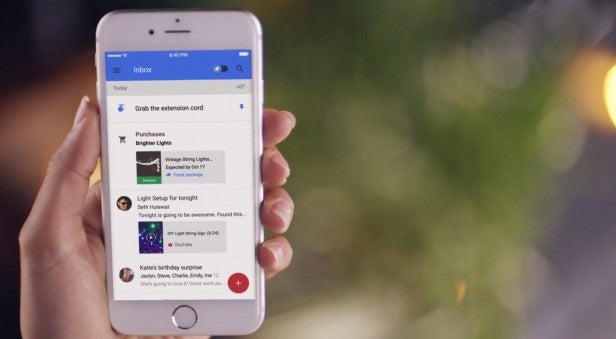 If you’re interested in Google Inbox, you may have to wait to get a taste. It’s accessible on an invitational basis only.

If you want to secure an invite, just email the Inbox team at inbox@google.com to ask for one, and you’ll be added to the waiting list. Otherwise, if you know someone who’s already enrolled, they can invite you directly.

Inbox will work on a Chrome web browser on any computer, as well as on Android and iOS.

Read more: Android 5.0 Lollipop Update: When can I get it?