With their beautiful screens, portability and pure simplicity of use, tablets have become incredibly popular in a short space of time.

Just a few years ago you wouldn’t want any other tablet than an Apple iPad, but things have changed a lot since then. There’s now hundreds of tablets to choose from, ranging from £50 to upwards of £1000. That’s a lot of choice, so we’ve put together this guide to help you make the right choice.

In it you’ll find out:

1. Which tablet OS is best for you: Apple iOS, Google Android or Windows?
Each system has strengths and weaknesses. Apple iPads may be the most popular tablets, but that doesn’t mean they’re the best for everyone.

2. What size tablet is best for you: 7-inch, 8-inch or 10-inch?
Size makes a big difference when buying a tablet. We’ll run you through the pros and cons of all the options.

3. How much you really need to spend and how you can save money
Knowing what you need will help you only spend as much as you need, and we have a few money-saving tips for you, too.

Finally, we’ll run you through the common tablet jargon you need to know so you don’t get bamboozled in store.

Want to find the top Christmas tablets? Head straight to our best tablets to buy right now. TrustedReviews tests hundreds of tablets every year so you don’t have to and if we haven’t tested it, it probably isn’t worth buying.

iOS vs Android vs Windows: which is best for you?

There are three main types of tablet to choose from, all with their own strengths and weaknesses. Let’s look at them individually.

Apple revolutionised the tablet with the original iPad, and iOS is the operating system that iPads run. iOS is one of the easiest systems to use – even children get it – and if you’re new to computing then it’s the best to get started on. It’s had a total redesign recently and iOS 8 looks simple, pretty and comes with some cool new features which make it easier to multitask.

One of the biggest benefits of the iPad and iOS is the App Store. With 750,000 quality apps and digital magazines optimised for the iPad, there really is an app for anything, from fitness to cooking and productivity to gaming. Android and Windows are still way behind in this area.

Another benefit of iOS is Apple’s support of it and its second-to-none customer service. If you have any issues with your iPad, just take it to the experts at any Apple Store and not only will they help you to set it up, but you can also attend free workshops to get the most out of it.

iOS isn’t quite as feature-packed as Android, though. The latter lets you tweak and change settings a lot more than iOS does, but that also makes Android a little more complex and therefore harder to use.

So what’s the catch? It’s the price. The iPad Air 2 and iPad mini 3 are still some of the most expensive tablets on the market for their size, and they don’t allow for external memory to be added like some Android and Windows tablets do. If you like travelling with lots of movies and music, you’ll need to pay a premium for the extra storage up front. 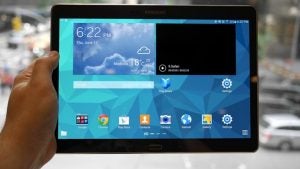 Android has come on leaps and bounds since it first launched in 2008. Because it’s free for makers to use, there’s a huge array of Android tablets to choose from. Some are excellent and some downright dreadful.

One of the biggest benefits of Android is its customisability. You can tinker with it to your heart’s content and set up your homepages just the way you want them. For example, you can have a widget to check your emails or a Twitter widget to see and respond to the latest tweets from your home screen.
It sometimes means it’s harder to find your way around, but that’s not the case with the very best Android tablets.

The Google Play store is much better than it used to be, although most of the apps are designed for phones rather than tablets, which means they don’t always make best use of larger screens. It also means 7-inch Android tablets are better to use than 10-inch ones, because the screen size is closer to a mobile phone.

Since Android is open-source, makers are free to customise it to create their own experience. This is a good and a bad thing: it means there’s lots of variety, but also that some Android experiences aren’t as smooth and easy to use as the standard ‘vanilla’ Android. Android 5.0 Lollipop, the latest version of Android, has recently been released and it’s a great improvement. It looks a lot more contemporary and has some great new features, but also comes with a few niggles that will take some time to sort out.

Another potential problem is the lack of quality of control in the Google Play app store, which occasionally leads to some malicious apps sneaking through. It’s a small problem, however, that a little common sense can avoid.

One example of a brand that customises Android heavily is Amazon with its Kindle tablets. Amazon goes so far as to make its own core apps and run its own Amazon Appstore, which unfortunately isn’t as well stocked as the Google Play store supported by most Android tablets. This is offset with excellent access to Amazon’s services, but they’re not as flexible.

Our favourite feature of Android, and something you don’t get on iOS, is support for ‘user profiles’. User profiles let you give your tablet to your kids, for example, but keep certain apps and settings locked safely away. It’s not fool-proof, but it does provide some level of security. Be aware, though, that this feature is only available on Android version 4.3 or later. Most tablets run earlier versions, but should get the upgrade at some point. If you want this feature, check which version of Android the tablet uses – our list will note what version is installed by default. 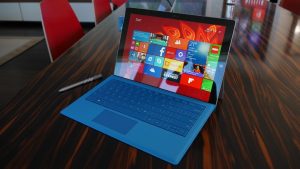 Although Windows has been around for ages, it’s only since the touchscreen-optimised Windows 8 appeared last year that it made sense to use it on tablets.

Because Windows 8 has so much functionality, Windows tablets need to be very powerful. This means they tend to be more expensive, heavier and have less battery life than their Android and iOS counterparts, although improvements to their processors mean this is less of an issue now than it was in the past. Essentially Windows 8 tablets can replace a laptop and often come with keyboard attachments so they can be used just like one.

Microsoft goes one better than Android when it comes to user profiles, though. You can control as much or as little as you want for each profile. So for a 5-year-old you might want to set up ‘Kid’s Corner’ that makes the tablet child-friendly and shows only the apps you want, whereas for a teenager you might want to just ensure some Internet restrictions are in place.

Windows tablets are a good option if you must have full Office access, but of the three platforms it gives the poorest user experience.