Where are these updates you promised, Sony?

There are a number of software features, some of them quite fundamental, that Sony either hasn’t added yet, or that really should be present in a modern cross-media console.

Sony recently announced that the latest PS4 software update was “coming soon,” but any hope that this might bring any meaningful additions seems slim.

In the spirit of being helpful, then, here are some of the Sony PS4 features that we’re still waiting for.

This is perhaps the feature with the most scope for fundamentally enhancing the core PS4 experience. It’s also a feature that Sony assured us was coming way back when it took the wraps off its angular new console in February of last year.

Suspend and resume is a potential game changer, or rather a game speeder-upper. It will allow the PS4 console to keep running in a low power state, enabling you to boot it up instantly.

The feature will also preserve game states, so you’ll be able to jump straight back into your most recently played game files without waiting for them to load. Think of how multitasking works on your smartphone, and imagine it applied to living room gaming.

Another of Sony’s much-vaunted promises regarding the PS4 is that you’d be able to enlist the direct assistance of friends via Remote Play.

This would enable your more skilled friends to take direct control over your game over the internet. Magic!

So magic that it doesn’t exist yet.

Sony head of worldwide studios, Shuhei Yoshida, recently confirmed that both of these first two ambitious features were still being worked on, but that they simply weren’t ready yet.

I don’t know about you, but I’m frankly rather tired of playing all these high quality games myself. 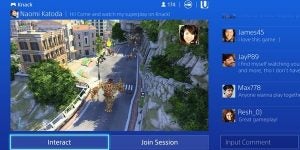 This one is for that subset of people still clinging to the 3D glasses that came with their last Smart TV purchase. Those who are still convinced that 3D is the future of cinema.

Cynicism aside, we can’t deny that the odd bout of 3D blockbuster cheese can be invigorating, even when played at home. But guess what? The PS4 can’t play 3D Blu-ray movies yet.

Even the Xbox One is set to be able to do that soon, you know. Come on Sony. These CGI scythes won’t fly unconvincingly out of the screen all by themselves.

Update: The good news is Sony has finally confirmed this is coming next week. One out of seven isn’t bad, right?

Listening to MP3 music files on your console has been possible for ages now, as has the ability to nominate your one tunes for game soundtracks (or at least those games that support the feature).

The same can be said for the myriad video formats out there.

Common media file support is such a basic feature of any console, that you probably don’t even think about its inclusion. Which is why it comes as a shock to realise that the PS4 doesn’t support such formats at all.

Is this Sony’s not-so-subtle way of forcing its users towards its Music Unlimited and Video Unlimited services? Probably.

We’re fully expecting this fundamental feature to be patched into the PS4 at some point in the not too distant future, but really, it should have been there from day one. 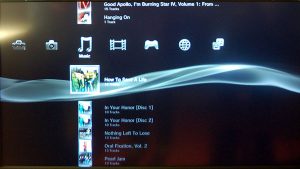 Linked to the PS4’s total lack of wider media savviness is this: the complete inability to plug your external hard drives or USB drives into your console.

It’s just not having any of it. Well, neither are we. Sort it out, Sony!

While we’re at it, where’s the DLNA support, eh?

You probably already bought an official Sony PlayStation-branded media/Blu-ray remote control. You probably did it years ago, not long after you bought your PS3 and realised that playing Blu-rays and DVDs with a DualShock felt…wrong, somehow.

Sony tends to build its gear to last, so we’d hazard a guess that it’s still in working order. So why doesn’t it work on the PS4?

Damned if I know.

Sharing gameplay videos instantly and smoothy on PS4 is great, isn’t it? Even if you’re not the sort of social exhibitionist who does such a thing much, it’s still a cool thing to have at your fingertips.

So why can’t you do it to the most popular video-uploading website around? The service that’s become almost as synonymous with watching user-made videos as Skype has with video calling?

Sony recently announced that YouTube support would be coming to PS4 this autumn. But again, why has it taken so long?

Next, read all you need to know about Destiny and Red Dead Redemption 2