Sadly, the UK Destiny release date is still over six months away, but that doesn’t quell our enthusiasm for what should be a very exciting new IP.

Destiny is the first multi-platform game from Bungie, the developer of the Halo series. It will launch for all current and next-generation consoles, including the PS4.

Previously Bungie was responsible for creating the Xbox exclusive Halo series, so this is the first time they will develop a title for any Sony console.

Set in a “mysterious future”, Bungie will attempt to blend multiplayer and single player experiences in this sci-fi adventure that it is calling the “world’s first shared-world shooter”.

We had some time to take a closer at Destiny at E3 2013 and were blown away by the game’s beauty. You can read our first look Destiny review for our first impressions of the upcoming Bungie title, but we expect it will successfully bring the worlds of single player and multiplayer together in a very compelling manner.

“This is a seriously beautiful-looking game, taking the kind of natural and sci-fi environments Bungie bought us with the original Halo, and dragging them into the next generation with some of the best lighting and water effects we’ve seen on the E3 show floor.” 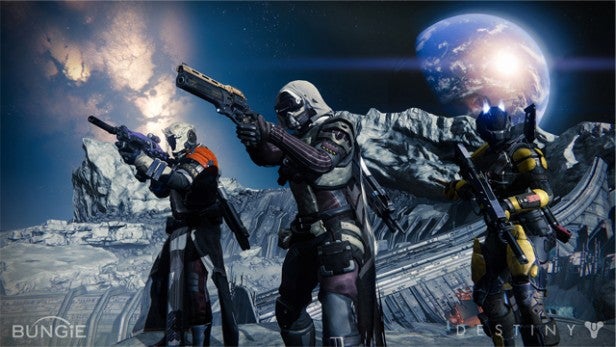 Destiny Release Date: When is Destiny coming out?

“Destiny has always represented a new beginning for our team,” said an official Bungie spokesperson. “It was born from brave possibilities. We dreamed of a renewed and independent Bungie. We found partners willing to bet big on some crazy new ideas with us.”

“We first shared the design pillars of Destiny less than one year ago. We promised to redefine what players should expect from a Bungie game. We said we wanted to change the way people play games together. We set our bar high. For us, Destiny represents a once in a lifetime opportunity.”

“Since then, Destiny has continued to reveal its promise. Every new build brings closer to our original vision. With those goals in sight, we intend to use every moment from now until the release of the game to ensure that Destiny lives up to your expectations, and our own.”

Before September 9, Bungie will launch a Destiny beta trial early in summer, with PS4 and PS3 gamers to be the first to benefit from the early access.

Destiny News: What we know so far

Destiny will definitely launch on the PlayStation
Bungie confirmed that Destiny will be available for PS3 and PS4 from launch, the first time the developer has ever produced a game for a Sony console.

The developer produced the Halo series, which has always been an Xbox exclusive.

“After Halo, we asked ourselves the question: what’s next? What’s worth doing? Destiny is an ambitious project, what we’re calling the world’s first shared-world shooter”, said an official Bungie spokesperson. “Destiny is going to be amazing on PlayStation 4, it’s a great piece of gear. We can’t wait to see what PlayStation fans do when they set foot into our world for the first time.” 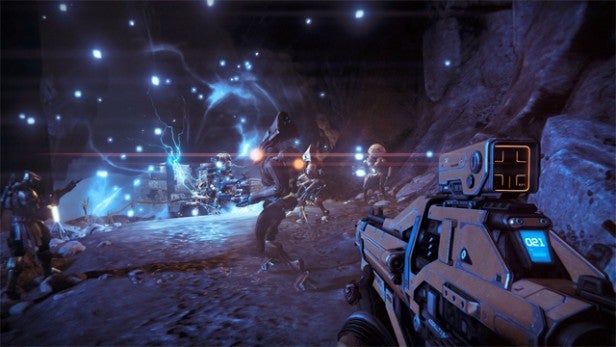 There
are definite similarities to Halo and Borderlands, and even some strong
references to the Mass Effect series.

Posted on the
PlayStation Tumblr page, the gameplay images show the characters
battling alien enemies, while another shows three of Destiny’s fully
customisable characters with unique armour and weapons.

There’s
also a shot of one of the characters performing one of the
characteristic Bungie jumps that made us hanker for a Halo session. 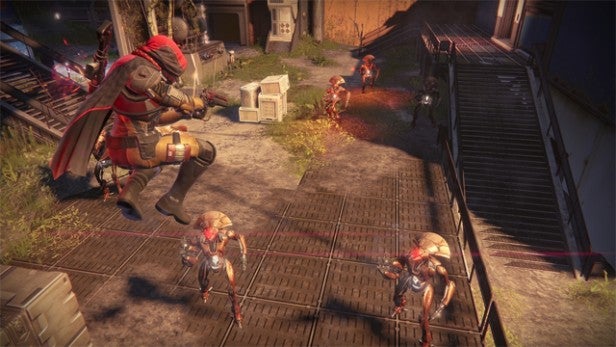 Bungie hopes Destiny will bring in a wider scope of gamers
Bungie is hoping that Destiny’s genre range and varying experiences will draw in a wide spectrum of gamers.

According to the developers speaking on January’s Bungie podcast, Bungie will reward players for things they do and interactions they have rather than a strict focus on missions and the grind.

“We are going into an interesting space, where we are a shooter, we are an action game, we are a game that a lot of people out there are really familiar with and they love and they spend a lot of time playing and we are trying to bring some additional elements to that”, said Tyson Green, Destiny’s investment lead.

Bungie also want to encourage players to immerse themselves in the Destiny community, which will not only improve their game experience but make them repeatedly come back for more.

“The goal isn’t to make you want to play the game for a thousand hours. The goal is so that you have this game that you come back to and that your friends come back to, and when you’re all coming back to the game, and you all feel like you want to keep playing this game. Then you have a social game at that point. You actually have a cooperative experience, a community experience.”

Listen to the full Bungie Podcast on the official website. 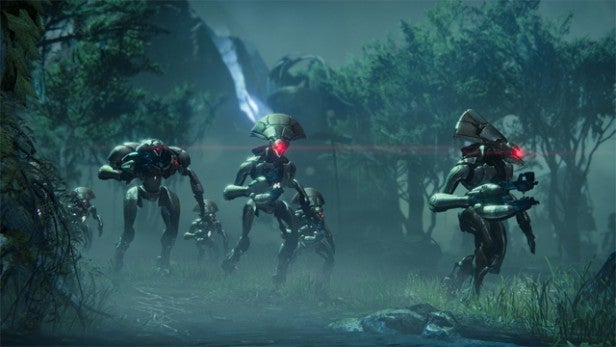 During the earnings call, Activision also revealed it has high hopes for Destiny, saying the game “has the potential” to become its third billion-dollar franchise.

“Together, we are bringing gamers an ambitious and innovative game which combines the intensity of great first-person action, with the character investment and social connections of an RPG in an immense connected universe. We believe the game is on track to deliver record pre-orders for a new franchise, a public beta is planned for summer and we expect the game on September 9.”

“We look forward to expanding this universe for years to come and you’ll see much more in the months ahead.” 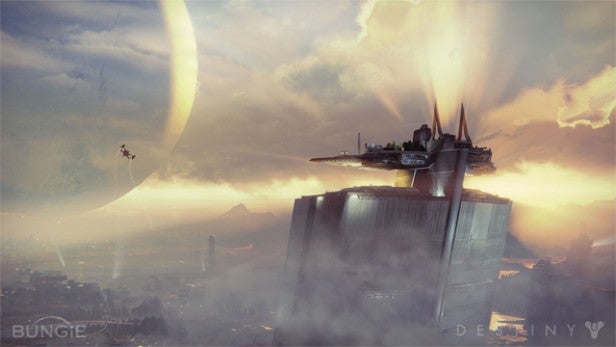 Bungie states that Destiny is set in a “mysterious future”, where you will be asked to defend the last safe city on earth, defeat the enemies and explore the ancient ruins scattered across the solar system.

There’s only one city left, despite the fact civilisation once spanned the entire solar system. “Its ruins are still out there: buried in the dunes of Mars, hidden in the jungles of Venus, lost in a wild and abandoned Earth.”

The Traveler is a “massive, mysterious alien ship [that] hangs overhead like a second Moon. No-one knows where it came from and what it’s here for”, but the remaining members of the city own it their lives. It protected them from the enemies and began the “Golden Age”, but now something has changed.

Now the “Guardians of the City” have to protect the city from the new enemies, which include Dregs, Vandals, Captains and the mighty Cabals. 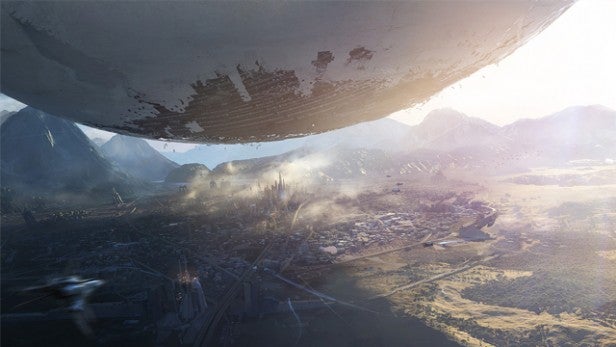 Everyone who plays Destiny will be asked to create their own unique character, customise the way it looks and fights and then go out and discover what remains of the solar system.

“Destiny features a compelling storyline, competitive multiplayer, cooperative gameplay choices, wide open public combat destinations, and third-person community spaces where you can repair and rearm before going out on your next adventure,” explains Bungie.

A leaked internal marketing document earlier this year suggested that Destiny will be “social at its core”, whilst remaining “fun and accessible to all”.

“Destiny is an online, connected experience. Like the PlayStation 4, Destiny lets you enjoy your content from multiple devices,” teased an official Bungie spokesperson at the PS4 launch. 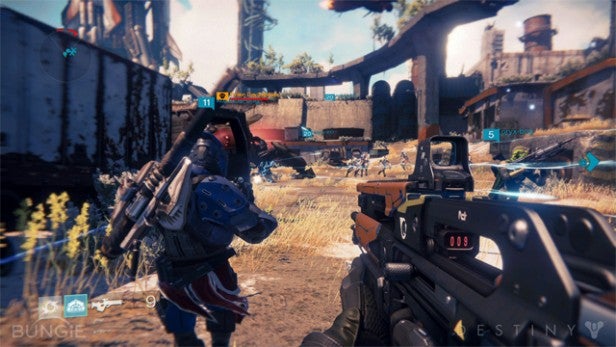 Bungie has been hesitant to say Destiny is an MMO title but says “people who like MMOs will enjoy it”, and intends to offer gamers new locations, storylines and additional content beyond launch.

The developer has been keeping the majority of the Destiny cards very close to its chest, but we expect there to be much more information available before the release date in September.

Although there isn’t much to go on at the moment, there are definite Halo and Portal influences within Destiny. Bungie has released three Destiny gameplay trailers so far, all of which are included below.

To console yourself until the September 9 Destiny release date, you can take a look at the official game trailer released earlier this year by Bungie.