Rimworld is many things. It’s a sci-fi themed management sim. It’s a game about survival and co-operation. It’s a toy box filled with elaborate systems over which one can pore.

But most important of all, it’s a poster-child for a type of emergent storytelling that, often hilariously, brings together the worlds of Rollercoaster Tycoon and The Walking Dead. Colonists can live in harmony, and sometimes colonists can die horribly by your own impure machinations, but all under the sky of the world’s densely layered mechanics.

This complex machinery isn’t particularly newbie-friendly, but I’ve continued to return to Rimworld, desperate to unearth more of its mysteries.

No two playthroughs are alike, and even though the game possesses some of the UI and ease-of-use issues we’ve come to expect from early access titles, it shows great promise in delivering memorable narratives, most of which end in savage tragedy.

From rabid squirrels to barefaced cannibalism, I’ve loved and lost characters to whom I’ve become uncharacteristically attached. Rimworld surprises you, and that matters.

The game’s premise is a simple one: your spaceship has been destroyed, leaving you and your remaining crew stranded on an alien planet. To survive you must create a successful colony, with the distant aim of returning to the reaches of space.

Building solid walls, planting crops, hunting local fauna – these are the game’s bread and butter, alongside the task of meeting the ever-increasing needs of a burgeoning colony. Imagine the precocious lovechild of Prison Architect and Civilization, and you’re probably close to the mark.

One of Rimworld’s strongest features is the obsessive depth of each character’s personal data. Every feature in the game seems to contain suites of numbers and useful information, but is particularly effective with regard to colonists. These people have personal backgrounds, individual skills, and a list of unique needs which, if unmet, result in an extraterrestrial episode of Lord of the Flies.

Of my first three colonists, it was Landale with whom I bonded most. Her clothes may not have survived the crash (she was naked for the duration of Efrafa’s existence) but her talent and strength of will remained.

Numerical values are assigned to each colonist skill, which vary from mining, to harvesting, and Landale – whose stats were almost universally impressive – built the entire colony from scratch, as well as hauling all the various materials required for construction. Sera and Martin, on the other hand, were useless stargazers. 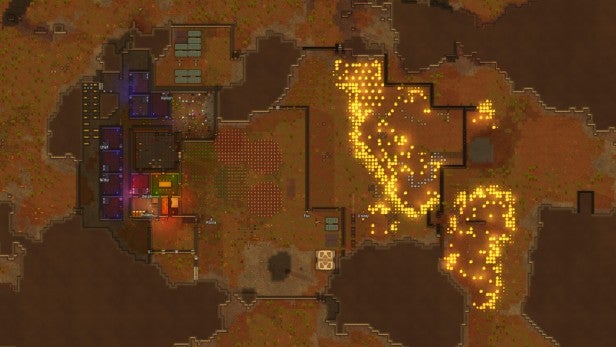 I speak of them as if they have personalities, because Rimworld makes it so. Colonists are semi-autonomous; general tasks such as construction and cooking can be prioritised through the game’s menus. You can order players to mine, plant crops or construct amenities, but if they need sleep, they sleep; if they must eat, then they’ll munch away.

Task priority is hidden behind the scenes, and although it can be overridden by direct orders, it’s far more interesting to see how the population occupies their time.

Environmental catastrophes – which range from rabid animals to raiders armed with grenades – are regular, and threaten to turn your colony into a graveyard. Landale fell first, and it was the beginning of the end. I didn’t understand that colonists can be “drafted”, taking them out of their semi-autonomous state and allowing direct orders such as “kill that raider NOW”. Without my instruction Landale ran, and was clobbered to a pulp while clutching a basket of xenomorphic junipers.

These events in themselves are gripping; I cared about Landale, but the way the game’s systems respond is even more curious. At the sight of Landale’s corpse, Martin became agitated and unproductive. When I innocently indicated her body was no longer “forbidden”, so that she could be buried, Sera immediately conveyed her to dining table. In his starvation (I had yet to understand how to create meals for my colonists), he ate her raw corpse in a startling act of savage decorum.

My second attempt at a fledgling civilisation also failed in grisly fashion, but before the dark end, things were going well. Cranny Hook was a far greater organisational success than Efrafa; I had become accustomed to Rimworld’s many eccentricities, especially with regard to its construction. Laying out zones for living space, crops storage and so forth is, as it turns out, essential rather than optional.

The depth of these systems is a wonderful but intimidating surprise. Food will spoil if left outside for too long, tasks are managed through a series of dialogue boxes that allow commission, and forbid, and all the while the AI is calculating which needs are most essential. There’s a real sense that you’re interacting with an ecosystem, rather than instructing brainless NPCs. 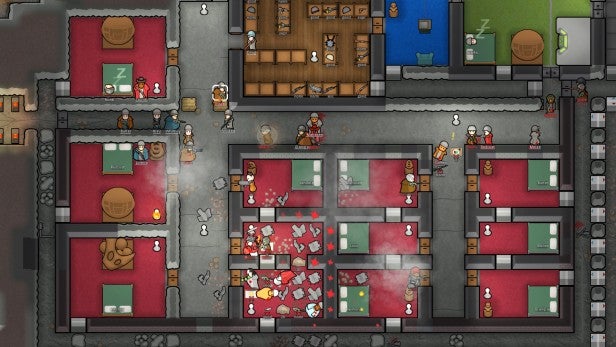 The downside of such complexity is that each menu and each mechanic must be carefully studied before it can be mastered. Why weren’t my hunters hauling any meat back to the carefully refrigerated cooler I’d constructed? Because I hadn’t selected for it to “allow corpses”. Why is that person on the verge of suicide? Because they’re bored out of their brains. Rimworld does a terrible job of signposting some features, but the result is so compelling that you don’t really care.

This steep learning curve is what eventually destroyed Cranny Hook. After holding off several raids successfully, prisoners were taken by my colony, but having no spare beds, I was forced to convert two bedrooms into prison cells. Silver and Erdo were, begrudgingly, forced to sleep on the floor, leading to unhappiness and a lack of productivity. Food stocks diminished; more mouths to feed, not enough supplies.

Eventually, the prisoners reached starvation. After bashing through the doors of their cells, they attacked the first living bodies they saw. By the end, only Silver was left standing, and watching his pathetic attempts to take on every task that needed doing was so sad that I was left with no choice but to euthanise him.

The story before was The Beach meets Silent Running, and it was fantastic; a failure in gaming terms, but a dramatic winner.

The final colony, Sanctuary, was to be everything my previous creations were not. It was ordered, with clearly designated zones, and provisions, for every one of my four colonists.

What I suspect will be part of Rimworld’s enduring appeal is this drive toward efficiency and gently escalating standards. I was no longer happy that everyone was simply alive and not consuming their housemates, or erupting into civil war; these people were going to live the life that Efrafa and Cranny Hook only dreamed of.

My own fastidious planning turned out to be my undoing. Sanctuary was placed within an encircling rocky outcrop, and proved fatal.

In search of a secluded area in which I could designate a “Party Zone” where my [now] four colonists could let loose, I ordered Beatrice to mine into the rocks surrounding the complex. At the fall of the first square of limestone, out poured a small army of ancient aliens from the mountain’s innards, armed to the teeth, straight into the kitchen where Yasuo was enjoying a spot of Turkey. 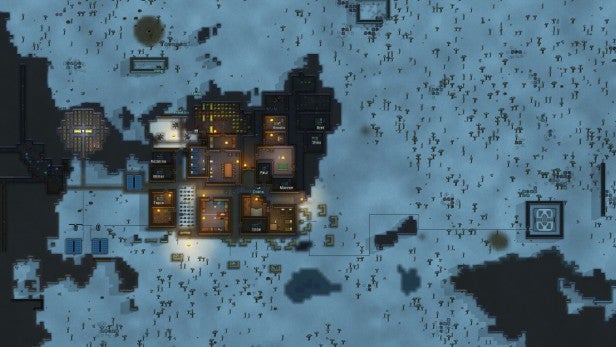 Beatrice burned to death in the fire, valiantly firing her rifle. Yasuo was struck down by enemy fire. I closed the game as Ven was bleeding to death next to the tamed colony monkey, who was also drawing his last. Yet more memorable stories.

These tales only graze the surface of what Rimworld has offered me so far. There’s always a new feature to be explored or project to take pride in.

Assuming my next colonists are burned alive by hostile aliens, I want to ensure they’re all wearing fancy clothes. I’m also keen to see what results scientific advancements may yield and whether it’s possible to construct an entirely impenetrable steel fortress where the colonists eat only the flesh of other humans. I don’t know whether these things will work out, but I’m excited to get back in and try – a positive sign for any fledgling simulator.

Rimworld is currently in Early Access, and costs £23. We’ll be coming back with a review when the devs press the big green button that says “ship it!”