Apple’s iPad range has thoroughly dominated the tablet market, and the new iPad Pro is looking to spread its influence into the realms of the productivity-focused laptop hybrid. Now Google has its own contender with the Pixel C.

Both of these tablets are ample in size and power, and filled some of the highest grade components possible.

Now that are reviews for both the iPad Pro and Pixel C are in, which is the better tablet? Let’s take a closer look.

These are two handsome tablet devices. The iPad Pro’s design is nothing we haven’t seen before, though. It’s essentially a super-sized iPad Air 2, with a similar all-metal design and rounded edges.

It’s also very slim at just 6.9mm, with is roughly the same thickness as the 7mm Pixel C. 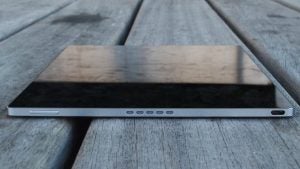 Google’s tablet, for its part, is a massive step up in build quality from most other Android tablets. This is the first tablet built by Google itself (the Nexus series tablets are all collaborations), and that extra attention to detail from the Android creator shows.

The Pixel C has a simple anodised aluminium metal frame, with squared-off edges and a premium-yet-robust feel. Weighing in at 517g, it’s a fair bit lighter than the 713g iPad Pro, and is generally much easier to wield.

In fact, Google’s tablet is altogether much smaller than the iPad Pro, and that’s thanks to its smaller display.

As mentioned, the Pixel C’s screen is significantly smaller than the iPad Pro’s. While Apple has stretched the iPad form factor out to a whopping 12.9-inches, Google has stuck with a 10.2-inch size that’s more typically associated with the term ‘full-sized’. 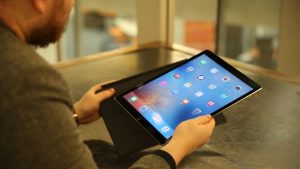 However, given the difference in size, the Pixel C display is actually a fair bit sharper than the iPad Pro’s. While Apple’s tablet produces a respectable pixel density of 264ppi, the Pixel C trumps it at 308ppi.

Still, both are crisp, accurate LCD displays that show off high resolution content brilliantly. We should also note just how bright the Pixel C’s screen is – we had to drop it to 60 percent for comfortable usage.

These two tablets pack two of the most powerful mobile processors in the business, and both will run the most intensive apps and processes without a stutter.

The Pixel C runs the little-used Nvidia X1 CPU, which boasts a ‘console-grade GPU’ as its defining feature. Meanwhile, Apple boasts that the iPad Pro’s A9X CPU is faster than 80 percent of portable PCs released in the past year. 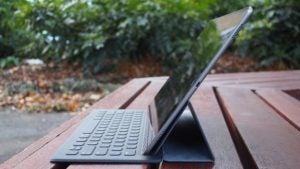 These boasts seem to bear out when comparing the performance level of the two tablets, with the iPad Pro having a clear edge in CPU tests and the Pixel C winning through on the GPU front.

Both are blazingly fast, and in real world terms are the leading devices for their respective platforms. That’s arguably all that really matters.

Both tablets have access to official-but-optional keyboard covers, both of which turn the host devices into pseudo laptops.

The Pixel C features a neat magnetic docking mechanism that doesn’t suffer from any fiddly hooks or latches, and the typing experience is decent thanks to a solid base. However, it suffers from the lack of a touchpad, and we experienced some lag in the typing process.

The iPad Pro’s Smart Keyboard offers a similarly strong typing experience, but also lacks a trackpad. It doesn’t have the same adjustable angle as the Pixel C, though, and the general keyboard support mechanism is a lot more convoluted and less practical. 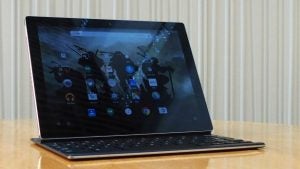 Both tablet keyboards suffer for their reliance on the touchscreen for navigation, betraying the fact that the host devices aren’t running true desktop operating systems.

One point in the iPad Pro’s advantage, however, is the availability of the Apple Pencil. This stylus enables fine sketching and writing capabilities, if that’s your thing. It certainly makes the most of that massive display.

Its implementation isn’t seamless, however, and there’s nowhere to store it on the iPad Pro itself. But at least Apple made such a stylus provision. Google hasn’t laid on anything of the kind.

And so to the true differentiating factor when it comes to comparing Apples with Googles – the operating system.

Are you an iOS person or an Android person? With hardware this uniformly good, the answer to that question could well determine which of these devices you opt for.

Both Android 6.0.1 Marshmallow and iOS 9 are fine, modern operating systems. However, if we were to judge them on the merits of these two devices, we’d have to hand the win to the iPad Pro. 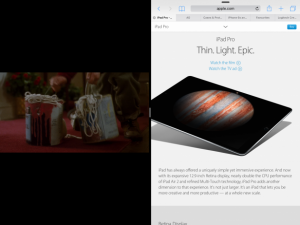 It comes down to this: iOS is, and has always been, a better tablet OS than Android has (smartphones are a much closer-fought thing). It’s simply been better optimised for the large-screen format – particularly in iOS 9, where Apple has implemented tablet-specific split-screen multitasking.

This latter feature is coming to Android, Google has confirmed, but not until Android 7.0 N – which is the best part of a year away.

Then there’s Apple’s peerless app ecosystem, which again is much better optimised for tablets than the Google Play Store. Put it down to the dominance of iPads past, but third party app developers seem to go to greater lengths to make their apps sing on iPad than they do on Android tablets – with a few notable exceptions, of course.

Apple wins the storage round, but not by much. Both tablets have 32GB as their base model, which we approve of. However, while the Pixel C’s top model is 64GB, the iPad Pro’s is 128GB.

We would have liked both of these higher options for both tablets, in truth, but the iPad’s is obviously more generous. 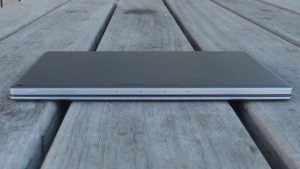 Neither tablet comes with expandable storage, which is arguably a bit of an oversight in an ostensibly productivity-focused market. We kind of expect this of the iPad Pro, but it’s a pity that Google didn’t see fit to add one to the Pixel C.

It’s far from unheard of in an Android tablet, after all.

The iPad Pro’s battery is a fair bit bigger than the Pixel C’s, but then you’d hope so given the significantly larger body of the Apple device and its associated bigger screen.

Both companies claim that their devices can go for 10 hours of continual usage. Sure enough, in our experience, both seem to discharge at similar rates.

For example, when playing 3D games, the iPad Pro tended to drop 19 percent of its battery life per hour. For the Pixel C, it was 15 to 18 percent. 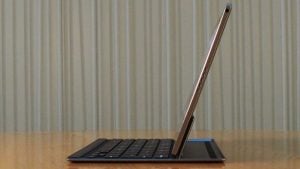 So far, we’d say that the iPad Pro has the slight edge on the Pixel C. But here’s an area that could swing things round entirely.

The most expensive model of the Pixel C is £200 cheaper than the entry-level iPad Pro. That’s a huge difference.

This arguably makes the Pixel C a better option than the iPad Pro if you’re on a budget, although we’d argue that the iPad Air 2 is more of a direct rival at a similar price. But that’s another story.

Both the Pixel C and the iPad Pro are premium all-metal tablets with bags of power and rich, pixel-dense displays. They’re also the pinnacle of their respective platforms on pure performance terms, thanks to the presence of high-end processors.

Both also benefit from decent keyboard covers that provide an improved, if far from flawless, typing experience.

But we’d give the edge to the iPad Pro in terms of overall experience. It’s got nothing to do with the bigger display (though that will matter to some), but rather has to do with the iOS platform that supports it. Apple’s OS is simply better suited to tablet usage at this point than Android, with a better-optimised UI and a richer library of tablet-oriented apps.

Of course, you have to pay a premium for the iPad Pro that many will be unwilling to pay, so if you’re looking for a keyboard-supplemented tablet for less than £500, the Pixel C will obviously be the better pick.

iPad Pro or Google Pixel C: which would you choose? Let us know in the comments section below