The Nexus 5 and Moto X are the two top Android phones from Google and Motorola. They are two of the purest Androids you can get, lacking the custom interfaces that ruin some phones.

But which one is better? Each phone has their strong points, but there’s a pretty clear winner in this battle if you care about value. Read on to find out which comes out top.

The Motorola Moto X is a good deal smaller than the Nexus 5, despite having an only slightly smaller screen. It’s primarily down to the Moto X’s approach to screen bezel design. It has tried to make the screen fill up as much of the front of the phone as possible – and that includes below the screen as well as to its sides. 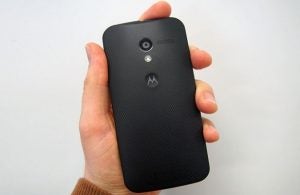 This size difference makes the Motorola phone a little easier to manage, and means it fills up a bit less of your pocket. However, the Nexus 5 is a lot thinner. It is 8.6mm thick while the Motorola is a relatively chunky 10.4mm.

There’s not a huge perception of difference in thickness, though, because the Motorola Moto X has a curvy back that hides the bulge pretty well. It comes across more as ‘small’ than fat.

Both phones are made primarily out of plastic, each using a soft touch finish that feels great. Neither phone is aesthetically perfect, though. They have fairly evident seams (which we imagine makes repairing easier) and generally pedestrian looks. Some of the edges of the Nexus 5 are a little sharper and harsher, giving the Moto X slightly better ergonomics. 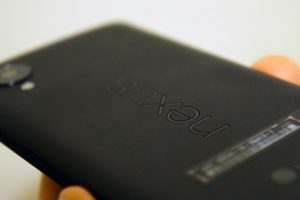 The Nexus 5 has a slightly larger screen than the Moto X, at five inches to the Motorola’s 4.7. Although not a huge difference, it’s enough to make sure the Nexus is a bit better to watch movies on.

Its display is a little more dazzling in general too. Whites are whiter, top brightness is a bit higher and resolution is much stronger in the Nexus. The Moto X only has a 720p screen – fairly low resolution for phone that sells for just under £400 at this point. Its colours are also a bit oversaturated, giving the Nexus 5 a more natural look.

Where the Motorola excels is in looking good in dark rooms. It has an OLED screen, which brings near-perfect black levels in the right conditions. Its illumination is also more even, where our Nexus 5 is a bit brighter at the edge of the screen.

Considering the various aspects of screen performance, though, we think the Nexus 5 has the stronger display. 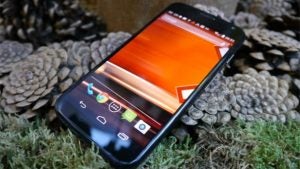 The Nexus 5 and Moto X are almost exactly the same in storage terms. You can choose between 16GB and 32GB versions, and there’s no way to upgrade the memory. Unlike a few years ago, Android is no guarantee of a microSD memory card slot.

With a 16GB edition, you get 12GB of user-accessible memory – true for both phones.

Power – Nexus 5 is much faster

The Nexus 5 is a lot faster than the Moto X. There’s really no competition on this one.

It shows in benchmarks too, where the Nexus 5 wipes the floor with the Moto X. In our own Geekbench 3 tests, the Moto X comes out with about 1,200 points, the Nexus 5 2,700. It is simply much, much more powerful.

It is not something we notice hugely in day-to-day use, though. Both phones are quite quick and can handle high-end 3D games like Real Racing 3. However, the Moto X is likely to show signs of age quicker than the Nexus.

It may have a lower-resolution screen that is less demanding of the processor, but the Nexus is so much more powerful that it is still ahead. 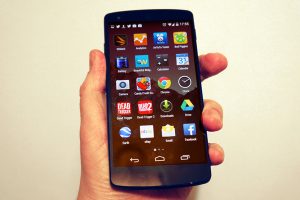 The Nexus 5 and Motorola Moto X both have Android 4.4 KitKat, the latest version of the  Android OS at the time of writing. However, they have completely different interfaces.

And – oddly enough – this isn’t down to a custom Motorola UI, as it would be with most other Android phones. They both have fairly vanilla takes on Android.

What the Nexus 5 has is a new sort-of experimental interface called Google Experience. You won’t find it on any other Android phones fresh out of the box – although it is actually hidden on phones with Android 4.1 and newer. Find out how to get it on the Motorola in our Moto X tips and tricks article.

The Nexus 5 interface has a brighter, simpler, cartoony look that we think is pretty good. It hides the widget interface too, which is handy when we hardly use it in the Moto X.

Another benefit of the Nexus 5 is that it will get faster updates than the Moto X. Where they’ll go straight to Nexus devices, Motorola will have to fiddle with the new Android updates and prepare its own new update for phones like the Moto X, though Motorola claims it will do this faster than any other phone brand. 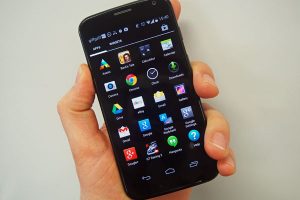 Camera – Nexus 5 is punchier, but they are quite even

When the Nexus 5 arrived, we had a mixed opinion about its camera. It could produce good shots, but it was held back by annoying shutter lag and terrible overall speed. This has been improved with an update, but the Moto X is still a bit faster with around 3fps burst shooting. It also has a more intuitive interface – the camera app is one of the few bits Motorola has customised, rather than using the standard Android software.

In photographic terms they each have their own strengths and weaknesses. The Nexus 5 photos are a bit sharper, but the Moto X offers superior dynamic range. The Nexus 5 is better in low-light conditions thanks to its optical image stabilisation but exposure is generally more even with the Moto X. They are both flawed, but pretty decent cameras.

The Moto X has superior specs, though – with a 1/2.6-inch sensor that’s larger than the 1/3.2 sensor of the Nexus 5. It also has a higher megapixel count. It has 10, the Nexus 5 eight. Of course, that extra resolution doesn’t really shine out much in the resulting photos.

For the best results, both phones need to use their excellent HDR modes. HDR combines multiple exposures to increase detail and even out exposure in scenes with tricky lighting.

The Nexus 5 is a bit cheaper than the Moto X SIM-free. It starts at £299 (16GB edition) where the Moto X costs £379 for the 16GB version. Given the Nexus has a higher resolution screen and a much faster processor, the Nexus 5 is clearly the better-value phone.

There is also a cost discrepancy on contract. From Carphone Warehouse, which offers deals from the main mobile networks, Moto X deals start at £25 a month. Nexus 5 deals start at £21 a month – a £4 difference adds up over a two-year contract.

In some respects these phones are quite similar. They’re not as flashy as something like the HTC One, and they have vanilla or near-vanilla versions of the Android software running the show. However, we can’t ignore that the Nexus 5 is a much more powerful phone that is cheaper. It’ll also get Android updates more quickly than the Motorola phone. All this means it gets our vote.