Big, bold and extremely fast, the Netgear Orbi RBKE963 Wi-Fi 6E Mesh System can deliver faster-than-wired speeds on its 6GHz band, and lightning-fast Wi-Fi on its regular 2.4GHz and 5GHz bands. With powerful parental controls and excellent security, this is the best all-round mesh system available today – but it’s expensive.

Faster internet connections, the use of ever more devices and greater demand mean only one thing: we need faster Wi-Fi. That’s where the Netgear Orbi RBKE963 comes in. This is a Wi-Fi 6E mesh system that uses that latest version of Wi-Fi to introduce a brand-new 6GHz high-performance channel for better-than-Ethernet speeds.

Packed full of the latest features, this is as close to future-proofing as you can get – but you’re paying for it.

Although the Netgear Orbi RBKE963 looks similar to previous mesh systems, the router and two satellites are larger than on the Wi-Fi 6 Orbi RBK852. A new antenna layout, plus a need for the 6GHz band mean that a little more space is required.

The router and two satellites are of the same size (279 x 190 x 84mm), but the port layout is slightly different. On the router, you get a WAN port. This is a 10 Gigabit Ethernet port – given that the fastest internet connection available at the moment is 1Gbps, having 10 times that capacity available means you’ll be fine for years to come.

Then, there are three Gigabit Ethernet ports, and one faster 2.5 Gigabit Ethernet port. This can either be used to directly connect a faster device (many newer PCs have a matching port), or you can use it to connect the satellites together (this is known as a wired backhaul).

The satellites feature the same arrangement of Ethernet ports for wired devices or, again, you can use the faster 2.5 Gigabit Ethernet port for the wired backhaul.

The advantage of 2.5 Gigabit Ethernet is that it will run over standard Cat 5E cabling; if you have an older Orbi system with Ethernet running around your house, this new system offers an instant upgrade.

As has been the case with all previous Netgear mesh systems, set-up is via the Orbi app. This takes you through both configuring the Wi-Fi network and placing any satellites around your home. Satellites can be connected via the dedicated 5GHz backhaul network (wireless) or via Ethernet (wired).

Since this is a new system, only the RBSE960 satellites are supported, not the older RBS860 or RBS760 Wi-Fi 6 models. That’s a shame, since the older satellites have identical wireless specs, but just don’t have the 6GHz networking option.

Having said all that, I plugged an RBS860 satellite into my home network via Ethernet and rebooted it. It doesn’t appear as a satellite, but it does update its configuration and wireless settings if I change them. I don’t recommend going down this route, but it appears to work to a degree.

From the app, you can see which devices are connected to your system, change the Wi-Fi name and toggle the guest network. You can’t take control over your wireless networks, and for more in-depth settings, you’ll need to use the web interface.

Via the web interface, you can change the channels used by the 2.4GHz, 5GHz and 6GHz networks. And you can split the 6GHz network off from the 2.4GHz/5GHz networks if you prefer. That way, you can ensure that newer devices are connecting to the fastest network possible.

Due to the requirements that 6GHz networking has to use WPA3 security, the 2.4GHz and 5GHz networks have to support at the minimum, WPA2 + WPA3 mixed mode. That’s so that they can hand off to the 6GHz network for supported devices.

This change is great for security, but means that some older devices may not be able to connect. If you experience problems, there’s a Wireless IoT network that you can turn on, which supports older versions of WPA for legacy devices. There’s no particular security benefit to this network, as you can read about in my guide to the Netgear IoT network.

I should also mention that WPA3 support and 6GHz support is a little hit and miss. I’ve got have a Z690 motherboard that supports both, but had to update the driver to get it working. And I could only connect to the 6GHz network using Windows 11 when I combined the networks; my computer refused to connect to the individual 6GHz network. The situation will improve, but this is early days for 6GHz networking, with few devices that support it.

As with other Orbi mesh systems, the Netgear Orbi RBKE963 comes with parental controls built-in. The standard version allows you to create profiles for each household member, bundled with all of their devices. For each profile, you can pause all internet access across all devices at the touch of a button.

Pay for the higher tier (£6.99 a month or £49.99 a year) and you can also set time limits, schedules and bedtimes; track internet access and set the level of internet filtering per person.

Netgear Armor is also available, with a one-month trial (otherwise £84.99 per year). Powered by Bitdefender, Armor protects your entire network, blocking spam and targeted attacks, as well as scanning your devices for any issues. Plus, you get Bitdefender software to install on any physical computers you have.

For network-wide security, it’s good to have, but the system can be a little strange. I received a message informing me that my Netatmo Thermostat had been scanned; but that’s an old device that I connected to an old Orbi system years ago for testing.

Internally, the Netgear Orbi RBKE963 is something of a beast: a quad-band Wi-Fi system with 16 streams per satellite. Streams are a little like individual networks, and devices can use one or more, allowing bandwidth to either to be shared more widely or devoted to a single device. With one router and three satellites, this package fits in 48 streams in total.

So, why not use 6GHz for the backhaul? This is because the downside of 6GHz is that it delivers less range, so sticking with 5GHz is more reliable.

With 6GHz you may find some issues punching through walls, depending on your home’s construction. The benefit of a mesh system such as this is that you can place satellites where they have the most effect, putting 6GHz devices near to them.

To test the performance of the Netgear Orbi RBKE963, I first started with the 6GHz band. Using my Z690 PC as the server, I connected a laptop with a 2.5 Gigabit Ethernet adapter to the satellite. With the TamoSoft Throughput Test, I saw average throughputs of 1143Mbps.

Running the same test using purely Gigabit Ethernet, I achieved average throughputs of 934Mbps. As you can see, in the right situation, 6GHz Wi-Fi 6E can be faster than Ethernet – who’ll want cables in the future?

Moving to my standard tests, I used a standard Wi-Fi 6 laptop to test performance around my house. At close range to the router, I saw throughputs of 508.34Mbps. This is a little lower than the same test on the RBK852, although variance is a common theme with Wi-Fi testing, due to interference at different times of the day.

Moving to the first floor, performance was the best I’ve seen at 333.26Mbps. On the second floor, close to a satellite, throughput was an incredible 439.95Mbps – the fastest I’ve seen at this range.

If you want the best and fastest mesh system available, and have the kit that can make the most of it, you won’t be disappointed.

That price will be difficult to justify for the majority, and standard Wi-Fi 6 mesh systems are available for a lot less.

Brutally fast and packed full of features, the Netgear Orbi RBKE963 Wi-Fi 6E Mesh System is the fastest overall system I’ve tested, particularly at range. When using the 6GHz band, I saw performance levels that were better than those delivered via a regular wired Gigabit Ethernet network.

In terms of future-proofing, this mesh system delivers everything you’re likely to need now and well into the future. Price is likely to be an issue; this system is hugely expensive, costing even more than the previous generation product. If you want the best, then this is it; however, if you’re more price-conscious, check out the guide to the best routers. 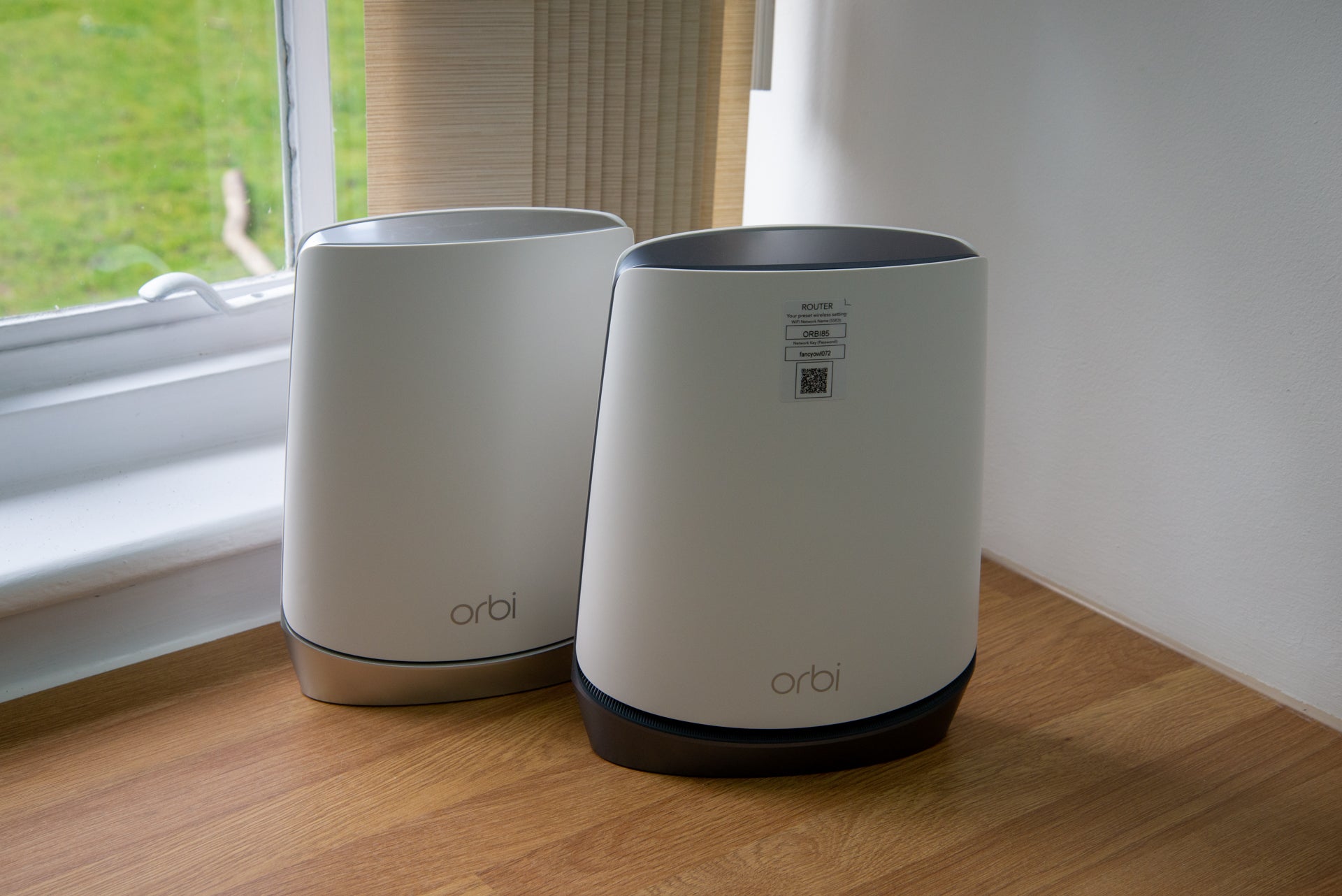 What does Wi-Fi 6 on the Netgear Orbi RBKE963 give you?

You get a new network running on the 6GHz band, which offers more bandwidth with less interference.

No, you can’t mix and match satellites from older systems.