Kindle Paperwhite or Kindle Voyage: They’re both great, but which one is right for you?

It’s fair to say that Amazon dominates the e-reader market. Yes, it does have some competition from Kobo, Nook and a few others, but the online shopping giant is still the one to beat when it comes to digital books.

To prove that point even further, we’ve pitched easily the two best e-readers on the market against each other – the Kindle Voyage and the Kindle Paperwhite.

The Voyage stands atop Amazon’s line-up, while the Paperwhite takes the mid-range spot. There’s of course a difference in price, but both devices come with really fantastic displays that impress whether your reading in the day or the night.

If you want to know which Kindle to buy, read on.

The Kindle Voyage is definitely a step forward from the Paperwhite in design terms, though you have to really go hands-on with it to feel, rather than see, the difference.

The plastic back is gone, replaced with a premium-feeling magnesium material that’s sliced up with some sharp lines to give an angular design. This forms a rather unique design, and one we really like. The sides nestle nicely in your hands, while the slim form-factor and minimal weight (a mere 180g) make this thing a pleasure to hold. 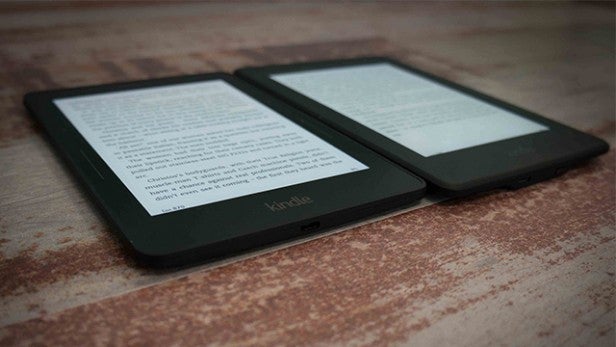 That’s not to say the Paperwhite is heavy. Unless you’re holding both together, you won’t notice the difference. You can hold either just like a normal book for extended periods of time without feeling any arm ache, and even if you decide to add a case they’re still perfectly holdable with one hand.

We particularly love how the display on the Voyage sits flush with the bezels rather than recessed within them, as with the Paperwhite. The obvious plus side here is you won’t get anything stuck in the corners – a small, but constant irritation we have – but it also makes it look so much sleeker.

Finally, the Voyage also attempted to reintroduce physical buttons into the Kindle line. Something, which was phased out when earlier models switched to touchscreens. Instead of proper buttons, the Voyage uses a combination of haptic feedback and page turn sensors to give you a slight vibration every time you push down on either bezel. 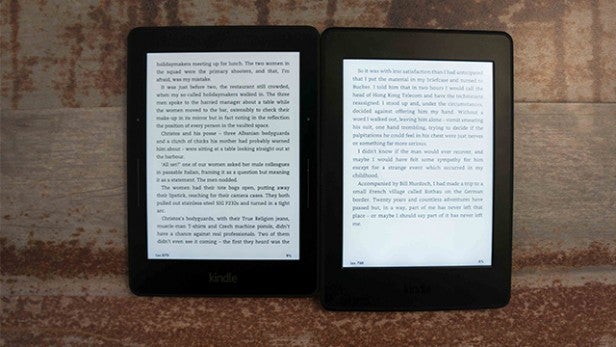 It’s called PagePress, and at first we found the feeling a bit odd. You’re not quite sure how hard to press down and the feedback is a little jarring, especially if you’ve been used to proper physical buttons or just tapping the display. But, we got used to it very quickly and if sacrificing the buttons and using these as a replacement helped keep the weight down, we’re all for it. 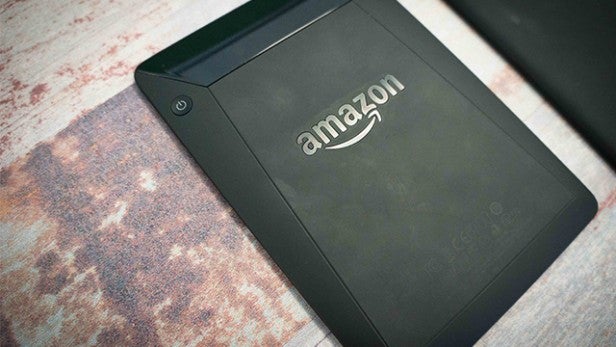 The Voyage wins out in the design stakes, that’s clear. It’s the sleekest Kindle yet and easily the best-looking e-reader on the market. From the flush display, to the magnesium back, to the ultra-thin design it just screams precision and quality. But, there’s something about the durable nature of the Paperwhite that still has us interested. You can chuck it in your bag and it’ll survive, give it to the kids and the damages seems to be kept to a minimum. For a device like this, that’s meant to be more durable than delicate, that’s a big bonus.

The biggest upgrade to the latest Paperwhite is the display, which now matches the 300 ppi (pixels per inch) resolution that was introduced with the Voyage. This means text is far crisper and clearer, which is always going to be better for the reading experience. It’s not exactly the same as the Voyage though, which is something we’ve realised after spending a lot of time with both devices. 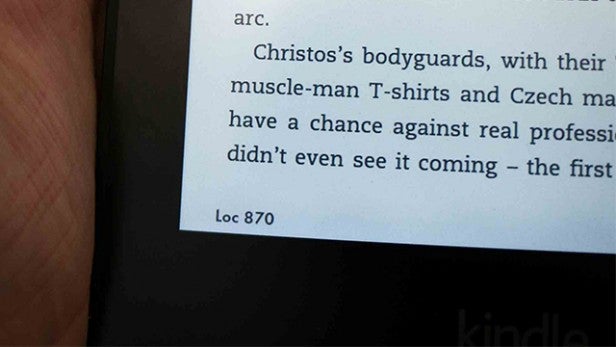 The text is, to our eyes anyway, certainly more vivid on the Voyage. It’s darker and has more of a ‘pop’ to it, we prefer it to the slightly duller text on the Paperwhite.

It’s also worth reiterating that the Voyage’s display is the first in the Kindle line to be constructed from a toughened glass rather than plastic. This means that it’s more resistant of scuffs, thus allowing the aforementioned sleeker design, and it’s also smoother to the touch. That’s despite the fact that the Voyage’s display has been micro-etched to avoid reflections.

The Voyage’s display also benefits from an adaptive front light that adjusts the brightness more subtly than the Paperwhite when moving to a darker environment. When you’re reading in bed the light will slowly darker as your eyes adjust, just like you’d normally see on a smartphone. 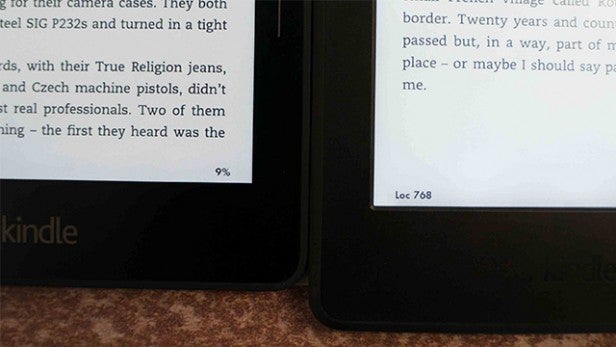 Actually, the backlight in general is far better on the Voyage. The light is far more even – so you won’t get a brighter bottom half, something we’ve always found the Paperwhite – and it seems to have a wider spectrum of levels. Jack both devices up to max brightness and the Voyage far outshines the Paperwhite.

Both displays are very crisp though and this year’s Paperwhite is a massive step forward from the last iteration. The Voyage does have some extra features and better contrast, but it doesn’t outclass the Paperwhite. The latter also has access to Amazon’s brand-new Bookerly font, which improves character spacing with hyphenation, justification and ligatures. It does look really nice, but we take a guess that this will come to the Voyage via software update soon enough.

Amazon has added loads more internal storage for the Kindle Voyage. You now get 4GB, which might not sound like a lot if you’re coming from the world of smartphones and tablets, but it’s loads in the world of e-books – the figure usually given is 1,000 ebooks per 1GB of storage.

It’s also, more pertinently, around double the capacity of the Kindle Paperwhite.

Other than that, both e-readers have similar options. Both have access to Amazon’s free cloud storage, and both come in 3G and Wi-Fi-only options.

It shouldn’t come as any surprise that both tablets have identical access to Amazon’s vast ebook store. We’re talking three million ebooks, newspapers, and magazines.

Amazon’s offering is pretty much the most comprehensive in the business, especially now that it’s settled its ugly differences with some of the publishers who dared to hold out for a better deal. If you’re a Prime subscriber you’ll have access to the Lending Library, while the Kindle Unlimited service has positioned itself as a ’Netflix for books’ with all-you-can-eat reading. 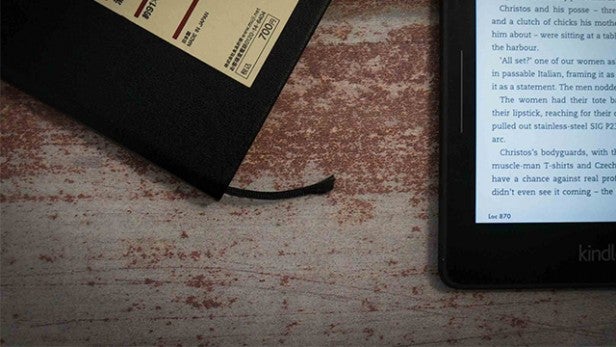 Where the two devices really differ is in pricing. We’ve established that the Kindle Voyage is a much more advanced e-reader in many ways, but then you have to pay £60 more for than for the Paperwhite equivalents.


To illustrate that, the £169 price of the Wi-Fi Voyage would get you a 3G Paperwhite. That might be worth considering if you’re on a budget and are likely to find yourself away from a Wi-Fi hotspot for much of the time.

We thought the price difference was a big factor last year, but it’s even greater this time around as the Paperwhite now packs a gorgeous display that rivals the Voyage.

Both e-readers last a good spell longer than your average tablet on a single charge, as is the way with ebook readers. But, the Kindle’s switch to a sharper, brighter display has clearly taken a toll on its stamina.

Amazon quotes six weeks of life from a single charge for both Kindle Voyage and Paperwhite, that means the newly-announced Paperwhite has lost two weeks of juice from the previous model. We’d take that any day for the improved display and we have to say that six weeks of battery life is more than enough. Especially when they both only take a couple of hours to full recharge. 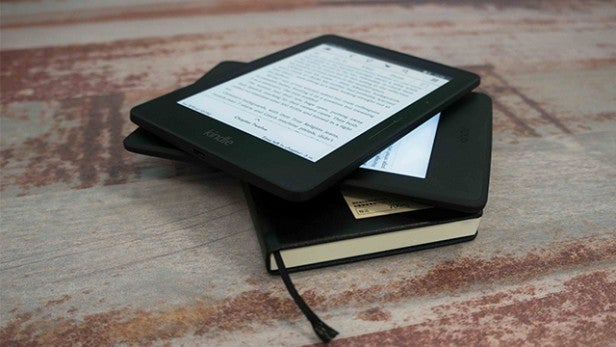 We haven’t had the new Paperwhite in our hands for six weeks yet, so we can’t really tell you how it’ll cope accurately. But we’ve been using it pretty solidly for the past five days and the battery indicator has barely nudged all, so that’s a good sign. If it’s anything like the Voyage, we’d say you’ll get a month of everyday use before even the idea of searching out the charger will enter your mind. Use it less frequently and yes, six weeks is very accurate.

The Kindle Voyage is a better e-reader than the Kindle Paperwhite in almost every way. It’s got a slightly better screen with improved backlighting; a nicer, more compact, more tactile design; and double the internal storage. For these reasons it is the clear winner of this contest.

But, we’d still recommend the Paperwhite as the one that most people should buy. The Voyage seems like a luxury and if you want to splash out that extra £60, and have the ability to, then you’ll be getting the best e-reader on the market. Thing is, the Paperwhite is still a fantastic device and you don’t lose out on any ‘massive’ features by choosing it over the Voyage. Both have the same access to Amazon’s store, both have great displays and both can last well over a month without needing a recharge.

If you’re an e-reader die-hard, the Voyage is the way to go. For everyone else, we’d say the Paperwhite is the perfect pick.