Apple’s gone and done it again. Its latest product launch not only showed off a new iPad and a new phone – the iPhone SE, apparently the tech mega-giant is now greener than Captain Planet.

We’re not going to delve into the legitimacy of Apple’s environmental claims right now. We’ll save that for later.

What we’re looking at now is whether the iPad Pro 9.7 is really that much better than the iPad Air 2. Let’s answer the big question: should Air 2 owners be looking to upgrade already?

From a distance it may seem obvious. No, of course you shouldn’t. But there’s more to this ‘upgrade’ when you get closer.

We use a MacBook. We use Windows laptops. There’s not a hope in hell of us replacing a proper laptop with an iPad any time soon.

However, hook up an Apple smart keyboard to an iPad Pro and you can turn it into a passable computer for writing docs, emails and so on. Apple has made a special version of the keyboard it rolled out for the 12.9-inch iPad Pro for the new 9.7-inch version.

It costs £129, but may mean some of you can get rid of your knackered old laptop. While you might imagine the keyboard will also work with the iPad Air 2, the Apple Store’s compatibility notes say it’ll only function with the new iPad Pro, that’s because it attaches via the Smart Connector – those three circles on the sides.

It clips into place using magnets, then uses a folio-style case part that folds into a support for the screen.

If you’ve had any interest in the iPad Pro to date, it’s probably the Pencil that got you interested. It’s the one tablet stylus that has had a lot of arty types saying it is better than a Wacom Cintiq, which is the industry standard for graphics tablets.

Using exactly the same core hardware as the iPad Pro 12.9, you can expect the pen to feel great, with near-zero latency making it feel like you’re actually drawing on the screen. With a pencil.

You get none of this in the iPad Air 2. While you can grab a whole load of different styluses for the tablet, they’ll either be dumb capacitive sticks, meaning you’re just replacing your finger with a fake pen (no pressure sensitivity), or third-party systems that simply aren’t going to work as well.

If you’re a bit of a comic book artist like our own reviews editor Alistair, there’s no competition. The Pro is going to be miles better.

So there. All done? You get a bit of extra scribbling and a bit of extra tapping away at Word documents, right? Not quite, there’s actually a whole load more to the iPad Pro 9.7 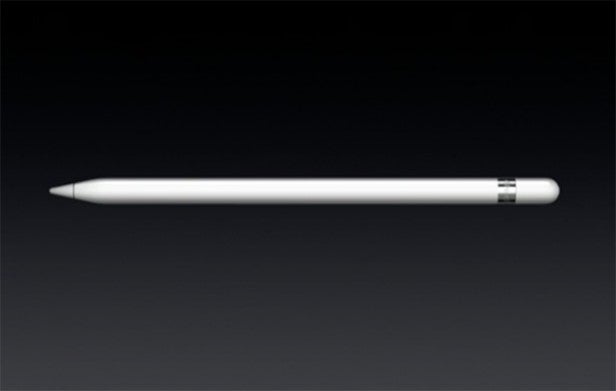 9.7-inch iPad Pro vs iPad Air 2: It has a much more powerful CPU

Sorry iPad Air 2 owners, your tablet is now officially an underdog. The iPad Pro 9.7 features a much faster A9X CPU, the same used in the 12.9-inch version.

This is built on a completely different processor architecture than the Air’s A8X, so while the iPad Air 2 has a tri-core CPU and the iPad Pro 9.7 a dual-core one, the newer tablet is still a lot faster.

We’ve not had a chance to run any benchmarks on the thing yet, we’ll cover that in our review, but existing Geekbench 3 results for the iPad Pro 12.9-inch give you a good idea of what to expect. According to the benchmark’s own aggregate league table, the iPad Pro scores 5466 points, the iPad Air 2 4527.

Phil Schiller gave us some pretty tasty little soundbites as he unveiled the tablet too. Its CPU has over “three billion” transistors, and the 12-core GPU offers 0.5 teraflops of power, “more than an Xbox 360”.

For a bit of wider context, the GeForce GTX980 offers 5 teraflops. But then it is a £500 graphics card. 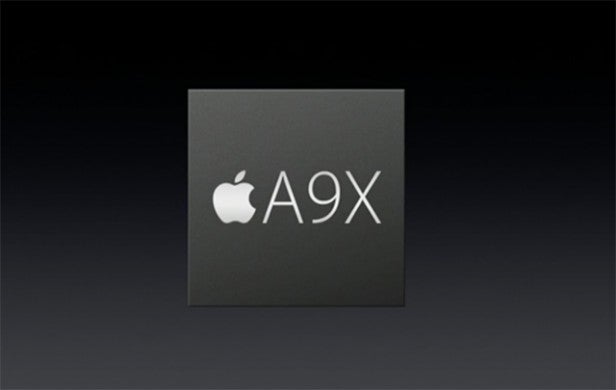 9.7-inch iPad Pro vs iPad Air 2: The Pro has much better screen colour

With the original iPad Pro, Apple redesigned the display driver of its tablet, and the 9.7 version gets this too. Some of this technology is about making the display respond naturally to the Pencil, though, so let’s focus on the bits you’ll really notice.

The iPad Pro 9.7 will get you richer colours than an iPad Air 2. This is one of those upgrades we’ll have to get a bit technical to appreciate because we, like just about everyone else, think the Air 2 has very nice display colour already.

Until now iPads have focused on the sRGB colour gamut. This is a standard rainbow of colours that HP and Microsoft agreed in the 90s as something monitors and printers should aim for.

Tablets with 100 per cent sRGB coverage and decent calibration, like the iPad Air 2, look great. But now Apple says the iPad Pro is made to satisfy the DCI colour spectrum.

This is a whole new rainbow laid out by the film industry, and features tonnes of all colours way deeper than anything you’ll see in the fairly limited sRGB range. We review screens a lot, and even good ones can fail to reach 50 per cent of the DCI gamut.

If the 9.7-inch iPad Pro manages to cover 100 per cent of it, well, that’ll be impressive. Of course, Apple didn’t actually claim full coverage. But unlike many Androids with wide colour gamut OLED screens, you can bet the iPad Pro won’t look unnaturally oversaturated despite its “wide colour gamut”. 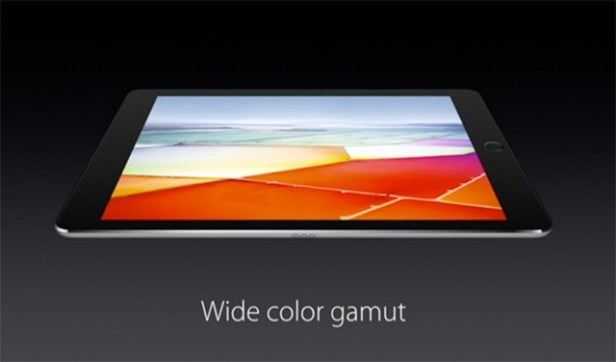 9.7-inch iPad Pro vs iPad Air 2: The Pro will be much better to use outdoors

If you’re not an epic screen snob, you probably don’t have to worry about whether DCI is better than sRGB. Leave that to the nerds.

However, that it’s going to look much better outdoors on a sunny day is going to benefit just about everyone. Phil Schiller says the 9.7-inch iPad Pro is 40 per cent less reflective than the iPad Air 2, even though that older tablet’s anti-glare coating was sold in as one of its key features back at its birth in 2014.

After all the excitement about an anti-glare iPad died down, people also found that the iPad Air 2 was a bit less bright than its predecessor, which is something the new Pro fixes. Schiller says it is “25 per cent brighter than the iPad Air 2” with 500-nit output. 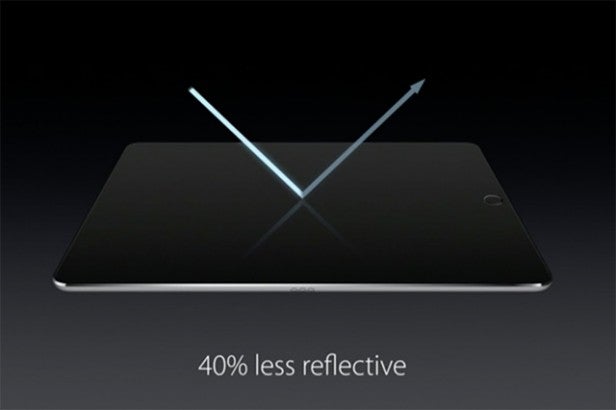 Colour matching for the environment is in

As part of iOS 9.3, both of these tablets will be able to use a feature called Night Shift, which is where the colour temperature of the screen gets warmer as the sun goes down. This means it’ll gradually look more orangey as it gets later.

Why? Blue colour spectrum light is part of the reason why using an LCD screen device at bed time can keep you awake. It may also give you a bit of eyestrain.

CyanogenMod has had this temperature-shifting feature for a while, in fact.

Where the iPad Pro gets another boost over the iPad Air 2 is that it has an extra-special ambient light sensor that lets it tweak the colour temperature of the screen to suit lighting conditions as well. Schiller says it has “two four-channel ambient light sensors”. The net effect is that whites should look white no matter what funky lighting is around the tablet.

Messing around with white balance is why that whole ‘is the dress blue or gold?’ internet sensation cropped up in 2015. 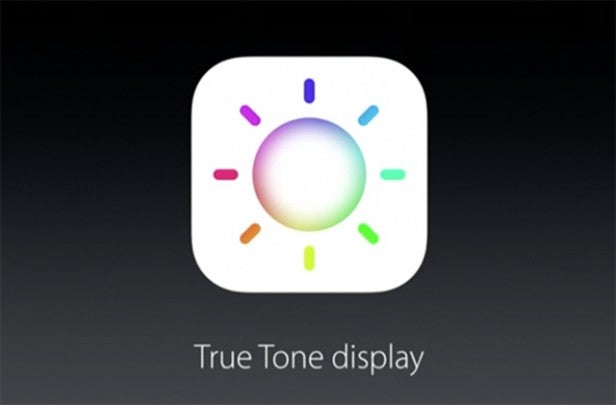 Yet more proof the iPad Air 2 isn’t really a top-end Apple tablet anymore, the 9.7-inch iPad Pro has much better speakers. The Pro has four drivers, the Air 2 just two.

In the iPad Air 2, the drivers sit on the bottom of the tablet, one to each side of the Lightning connector. The Pro moves the drivers, with one at each corner.

This is a very significant upgrade for the iPad as a media and gaming device, meaning you’ll get stereo sound you can actually appreciate. Schiller says the Pro puts our “two times the volume” as an iPad Air 2. So does that mean the drivers are working at the same level, but there are two more? Perhaps. 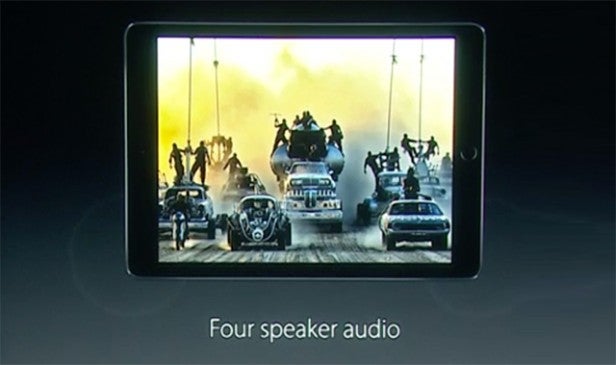 9.7-inch iPad Pro vs iPad Air 2: The Pro actually has a good camera

Just as we wouldn’t use the iPad as our main computer, we wouldn’t use a tablet as our camera either. Maybe it’s pride. Let’s be honest: people taking pictures with tablets look silly.

We’re not going to be able able to use the excuse that tablets have crappy cameras anymore, though, because the iPad Pro 9.7-inch gets the same 12-megapixel iSight camera as the iPhone 6S (or so it would seem). It’s a terrific sensor, with on-sensor phase detection pixels and much larger-than-average photosites, making it much better for low-light photos than the vast majority of mobile devices.

The iPad Air 2 has an 8-megapixel camera that, while good for a tablet, already lagged way behind the iPhone 6 in 2014. Apple has not specifically said the iPad Pro matches the iPhone 6S component-for-component, but the specs available are identical. As well as the same sensor resolution, it has a 5-element lens with an aperture of f/2.2 and those tell-tale “Focus Pixels”.

Unlike previous iPads, including the 12.9-inch iPad Pro, this doesn’t appear to be a cut-down camera. It can even shoot 4K video.

For the selfie hunters, the iPad Pro 9.7-inch has a 5-megapixel front sensor and supports the same Retina flash as the latest iPhones. This is where the screen’s backlight goes supernova briefly to act like a regular flash. By comparison, the iPad Air 2’s 1.2-megapixel selfie camera seems flat-out rubbish. 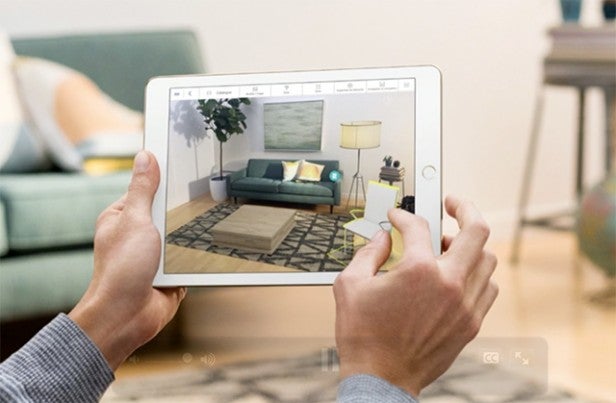 9.7-inch iPad Pro vs iPad Air 2: It comes in new models, including pink ones

Here’s the bit you’ve really been waiting for. You can get the iPad Pro 9.7-inch in Rose Gold. It’s the first time an Apple tablet has been available in this dusky pink shade.

More exciting, but something we’re equally unlikely to buy, is the a 256GB iPad Pro. That’s truly mammoth storage for a tablet, the same amount we use on a day-to-day MacBook Pro. Both Pro models are now available with this extra space.

The 9.7-inch iPad Pro is much more than just an iPad Air whose had its screen fiddled with to make the Apple Pencil work. It’s a comprehensive, really quite impressive boost in almost every area.

But you do have to pay for it.

There’s no way around it, the entry price of an iPad Air 2 is a lot more affordable.

Ok, ok, we admit it. The iPad Pro 9.7 seems like a pretty good upgrade. A great one really. We were ready to bash it with the cynicism stick, to do our best to shatter that smug Appley screen and laugh at Apple’s great ruse of trying to get us to use these toys as our main PCs.

And now we kinda want one. We still wouldn’t want to use an iPad Pro as a full-on computer, but even without all the Pro-themed upgrades, Apple has actually done enough to make this a worthwhile alternative to the iPad Air 2 for new buyers. New screen, new camera, new speakers.

I still don’t think many current Air 2 owners should feel the need to upgrade, though. Does your tablet really feel old? It shouldn’t do unless you let your dog use it as a comfort blanket or something.

Which do you think is better? Let us know in the comments