Right now it is fashionable to bash Apple… heck even Fox News is doing it. “What have they had lately?” espoused Fox Business News correspondent Charlie Gasparino last week. “They have had the iPad, they’ve had a few other things, but they don’t have anything innovating from [like] what came from Steve Jobs.”

The problem getting up everyone’s nose is a perceived lack of ‘innovation’, but this isn’t what bothers me. During Job’s 24 years and two spells in charge of Apple the company came up with four revolutionary products: the Macintosh computer, the iPod, iPhone and iPad. That averages out to one every six years. The iPad came out in 2010. Innovation (however we may define it) isn’t overdue yet we’re just less patient these days. Instead what irritates is how Apple is increasingly sabotaging its ability to innovate and on the back of operating system, iTunes and Apple TV inertia its latest way to do that is by releasing a budget iPhone 5C.

The case for
On the surface the so-called iPhone 5C makes sense on many levels. Most obvious is its role as a gateway to lure users into the company’s iOS and OS X ecosystems. In the face of ever-cheaper, better specified Android and Windows Phone handsets the iPod touch no longer does this job and Apple risks losing customers early to Google and Microsoft – customers who might get comfortable there, invest heavily and never come back.

Furthermore advances in phone technology seem to be levelling out. All phones are fast these days, most have decent cameras, GPS, accelerometers, 3G (or even 4G) and most of the biggest apps are multi-platform. Apple might as well exploit this plateau and once again get the masses aboard who have given Android an astonishing 79 per cent mobile phone market share.

iPhones for everyone, break out the party poppers. 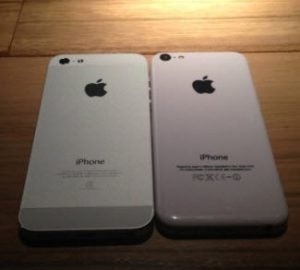 On paper this model works for just about everyone, except Apple. Apple is not your average company.

It got to where it is today by preaching that it is about as far away from an average company as it is possible to be. To do this Apple has succeeded in convincing the world of three things: its products are innovative, this makes them aspirational and this combination makes it worth paying a premium to attain them.

It is genius: the innovation takes care of the marketing, being aspirational results in demand (and content customers after a purchase) and big profit margins keep investors happy.

A budget iPhone risks all of this. By definition it can’t be as innovative, aspirational or as profitable. Worse still the better it sells the bigger ball and chain it becomes around Apple’s leg. Take a look at the iPhone 5S rumours. NFC, a fingerprint scanner, more responsive screen technology, larger capacities… they may be mostly upgrades, but they are all things that can inspire app developers to do the innovation for them. A budget iPhone will have none of these. In fact the latest rumour is it may not even come with Siri.

Budget devices often outsell more expensive options (look at how iPad mini sales rocketed past those of the iPad) and developers will have little motivation to create apps that can’t be used by the widest user base – a user base that just took a technological backwards step. Apple is welcoming the biggest problem of the Google Play store: developers designing for the lowest common denominator. It is one reason why premium Android gaming experiences remain thin on the ground and ‘free’ apps proliferate weighed down by invasive ads.

Apple can crow all it likes about the possibilities of any new fingerprint scanner, NFC or the extra horsepower of an iPhone 5S, but if developers aren’t exploiting them they will stagnate. Stagnation hits premium sales, hurts brand aspiration and convinces increasing amounts of users that the budget model is good enough.

What’s more when an iWatch or iTV eventually arrives can Apple afford to differentiate iPhones by their level of integration/functionality with these devices?

Limit it and you risk wider interest in them and jeopardise their chances of success. Give parity and there is even less reason to buy a premium iPhone. It is a no win-scenario. Contrast this with the current Apple sales model: you bring new functionality and it simply encourages people to upgrade to the latest and greatest iPhone triggering sales around the block and huge profit margins.

What is *really* the matter?
So perhaps the bigger question is – why is Apple looking to take all these risks? Lamborghini doesn’t need a budget car to stop people being hijacked by Ford when they buy their first Fiesta.

Lamborghini knows when you can afford it the appeal will always be there because they are confident in their innovation, differentiation and aspirational brand. If Apple is starting to question these qualities (and only they know their internal roadmap) then perhaps the company’s problems do go as deep as Fox and Larry Ellison would like us to believe.

Read about the new iPhone 5S features to expect