The Sonos Roam is here and our review is in and we liked it a lot.

If you’re an existing Sonos user then the Roam fulfils the promise of a truly portable speaker, one that you can take with you on your journeys. If you’re not already in the Sonos system, the Roam acts as the cheapest way in.

But what about the Sonos Move? That’s available as a bigger and bigger-sounding option for the outdoors. If you have neither, which out of the two should you be getting? Let’s see which of the Sonos Roam vs Move is better – or more pertinently – which serves you best? 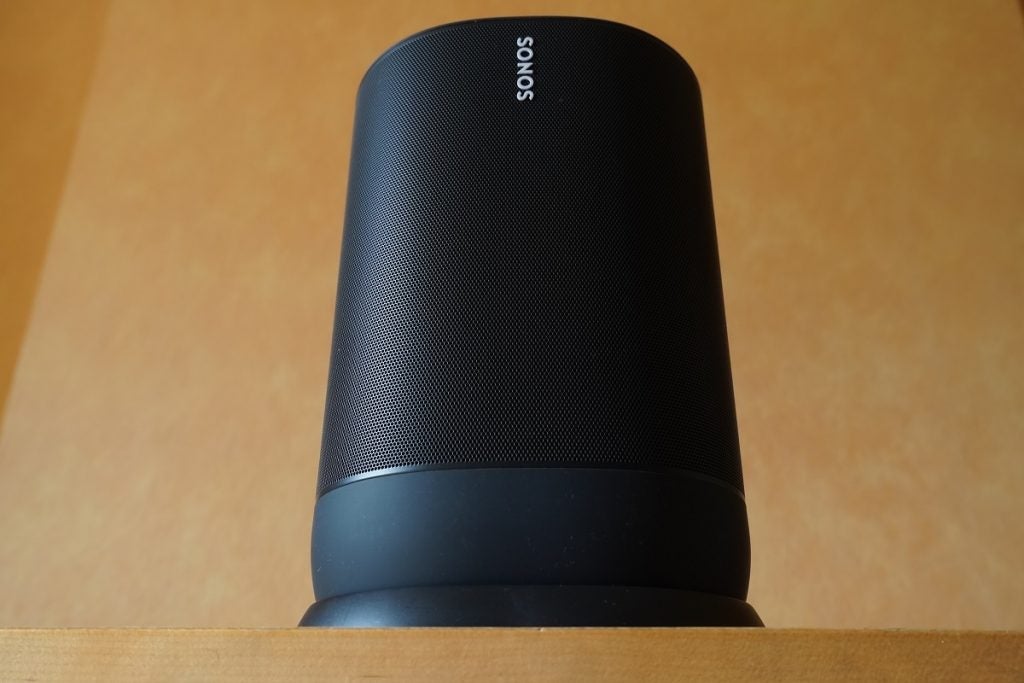 Both the Move and Roam adhere to the design aesthetic Sonos has built up in the past few years. In short that’s a mesh skin that covers the majority of the front (if not all) of the speaker with the Sonos logo emblazoned at the top and touch controls for playback, mic on/off on the top plate.

The biggest and most obvious difference between the two is the size. According to Sonos you could fit six Roams inside one Move, which is quite the difference when you consider the portability of each speaker. While the Move has an integrated handle for carry, the Roam can be held in one hand.

Further widening that gap is how heavy they are. The Roam is 430g while the Move is 3kg. That makes the former more suited outdoor activities, park use, what have you; while the Move is suited to a large space (say, a garden) or as a speaker for (socially distant) gatherings.

Build quality of both is what we’d call robust as both feel like weighty, premium products. Short of firing a missile they both feel fairly indestructible. With a consistent design approach they’re also consistent in terms of usability. Sonos’ aesthetic gives them something of a sober, professional look that’s exemplified by the choice of Lunar White and Shadow Black. There’s not much colour or personality in the Sonos line-up.

The Roam can be placed in vertical and horizontal positions, and that gives them more flexibility in terms of where it can sit (bookshelves, desktops and the rest). The Move is, as we’ve noted, bigger – so it’d need a fair amount of space to operate.

We like both speakers but the Roam wins for its outright portability. If you’re looking to take a speaker with you, the Roam would be the one to get. 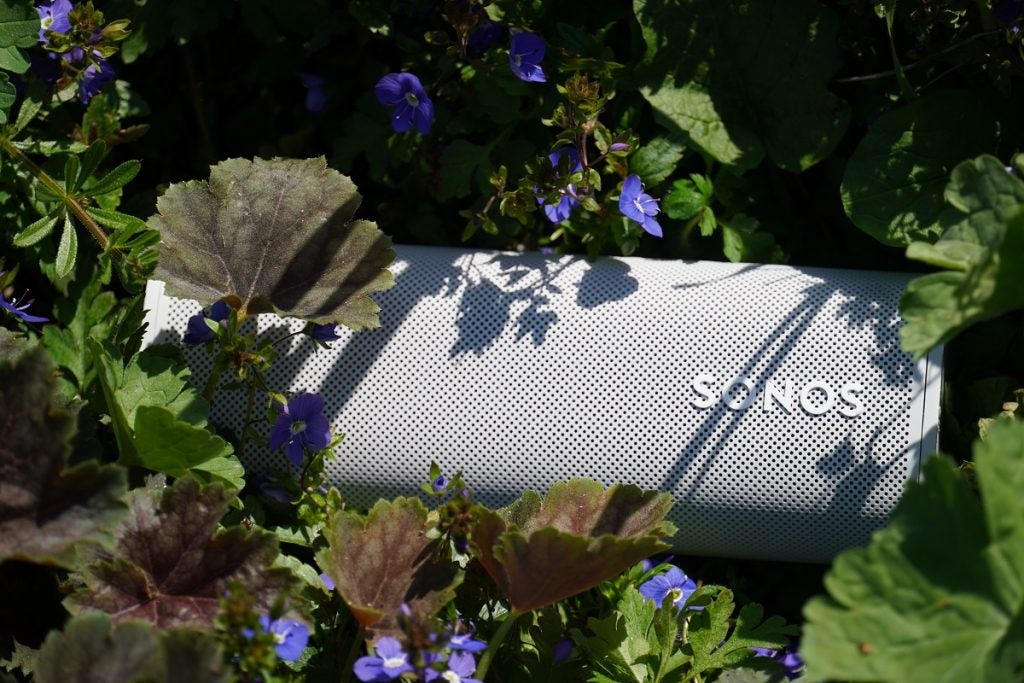 Both share a consistent feature set, but there areas where one beats the other. The Roam has an IP67 rating, which means its completely protected from ingress of dust and can survive being submerged in water making it fully waterproof. The Move has an IP56 rating – the highest without submersion in water. That guarantees protection against ingress of dust, water, mud or substances such as ketchup (for when those socially distant parties get messy).

The Roam also supports Qi wireless charging, although the wireless plate is available separately (£44). Or you can plug it in and charge from a device that supports USB-C charging. Comparatively the Move is charged either through its USB-C connection or charging base, which needs to be plugged into the mains. In that sense the Roam is the more convenient of the two.

Both have a 10-hour battery life and both have Auto Trueplay, which was first introduced by the Move. This allows sound to be optimised almost instantaneously, measuring the environment the speaker is in and automatically calibrating the sound for a consistent audio delivery. Bluetooth is 4.2 vs 5.0 – not necessarily a big difference, but the latest standard allows for increased powers of data transmission and signal reach with compatible products.

Both support the Sonos S2 app, though the Move can work with the S1 app while the Roam will only work with the S2 version. The app is filled to the brim with features when each speaker is connected to Wi-Fi turning them into smart speakers. Those features range from voice assistant support (Google Assistant/Alexa), AirPlay 2 and hundreds of music streaming services including Spotify, Tidal, TuneIn and Sonos Radio.

You can also group the speakers together with other Sonos products to create a multi-room system, update each speaker and more. One thing to note is that neither will perform an impression of rear speaker channels in a Sonos home cinema system if that’s a consideration.

New features introduced by the Roam include Sound Swap – a hold on the play/pause sends music to the nearest Sonos speaker – and automatic Bluetooth/Wi-Fi switching. The Roam can detect when it is on your home Wi-Fi network and switch into ‘Sonos’ mode. When it’s far from home it’ll automatically switch to Bluetooth and re-pair with your smartphone. The Move supports Sound Swap, but has a physical button for switching between Wi-Fi and Bluetooth states.

It is another win for the Roam. The tougher IP resistance works in its favour, the more current Bluetooth profile should also help, while the automatic Wi-Fi/Bluetooth switching is just a nice bit of convenience that bumps the Roam over the Move. 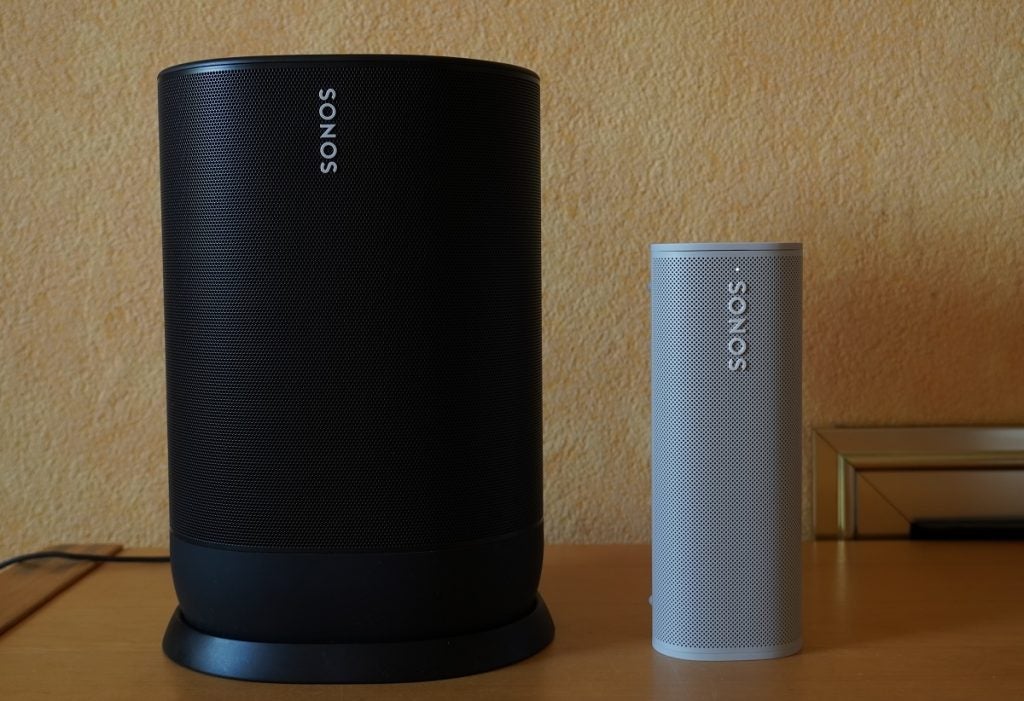 We found both the Roam and the Move sounded terrific, boasting Sonos understated but natural mid-range delivery, good treble reproduction, agile dynamics and sense of energy. So which sounds better?

The Move is the premium option and scores the win here. It has a bigger sound (though the Roam can fill a medium-sized room with ease), bigger bass performance, and more power.

Both sport a neutral delivery, but we enjoyed the big, confident and weighty low frequency performance through the Move’s mid-woofer driver. By comparison the Roam’s bass performance is solid, but will be lacking when sat alongside the Move.

The Move is arguably not the clearest or textured-sounding wireless speaker in general, but it’s a good deal clearer, cleaner and more precise than similar-sized speakers we’ve heard. It can lose a little of its composure, we feel, at higher volumes. But if you’re in an open space that’s unlikely to be much of an issue.

Both work well across a range of musical genres, Sonos’ tuning ensuring they can deal with the most eclectic of musical choices with some poise. Vocals are handled very well by both with no hint of sibilance and an expressive performance that means you hear every word as intended.

As well as going louder the Move can project sound further, and that makes it a better option for garden or party. If you’re in a park with friends or travelling somewhere then the Roam would make more sense. Both sound great, but the Move is the better-sounding speaker of the two.

Though the Move and Roam are both outdoor speakers, there’s enough difference in what they offer that they don’t step on each other’s toes. If you choosing between the two speakers it’s because you need the speaker to fulfil a particular function.

The Move is great for outdoor parties in the garden with its big sound, while the Roam is more convenient in terms of its portability – it’s the type of speaker you’ll want to take to the park or other people’s houses.

Both are highly enjoyable in what they offer. For existing Sonos users they extend the Sonos performance into the outdoor realm and whichever route you decide to go down, either one is well worth having.