Sniper Elite has always been about murdering Nazis, and similar degenerates, in the most gruesomely accurate manner possible. You could be tearing their testicles in two with a well-placed shell, or sending a group of them into oblivion by piercing a nearby pile of explosives.

Rebellion’s shooter series has always felt immensely satisfying to play, and now that formula is set to penetrate a new medium – virtual reality. While it’s still in the early stages, the demo I played was very impressive. Translating something so many people love to a new template isn’t always easy, but all signs point to Rebellion pulling off the impossible here.

Trusted Reviews has compiled everything you need to know about Sniper Elite VR, including all the latest news, gameplay, trailers release date and our hands-on preview.

Sniper Elite VR release date – When is it coming out?

A concrete release window for Sniper Elite VR hasn’t been confirmed yet, although it is currently in development for PlayStation VR and PC – likely set to support a number of headsets on the latter.

Sniper Elite VR trailer – How does it look?

We’ve compiled all of the latest trailers for Sniper Elite VR below, the first of which was revealed during E3 2019.

After playing so much of the series by traditional means, strapping on a headset and taking my first steps in Sniper Elite VR felt unusually alien at first. The brief demo began amidst a small European village in the middle of some serious turmoil. Nazis had civilians, soldiers and other personnel pinned down, bombarding them at every turn with seemingly unstoppable gunfire.

The situation wasn’t pretty, but I had the means to turn things around. With a sniper rifle and other firearms at my disposal, I moved forward, picking off every single fascist I came across. This is where the surprising intuitiveness of Sniper Elite VR began to make itself known. I played with a PlayStation Aim Controller, which acted as a realistic weapon in my arms that I could move in a physical space with near 1:1 accuracy.

Holding the rifle up to my eye would trigger dynamic zoom, allowing me to focus on targets many metres away, and pull off shots with no problems at all. It felt wonderful, and I could even slow down time to execute strikes on particular body parts. Veterans needn’t panic, the killcam is completely intact in virtual reality. Pull off absurdly accurate kills and the camera will zoom in, or even follow the bullet to provide a closer look at the ensuing mayhem.

I was genuinely surprised by how quickly I was able to adjust to Sniper Elite VR. Rebellion has considered how the majority of players will react once a virtual gun is placed in their hands, making it wonderfully accessible in the process. I could hand this to my parents and they’d pick it up in no time at all – which isn’t something I can say with the majority of games nowadays. But we’ve talked about gunplay enough, how does it feel to move around? 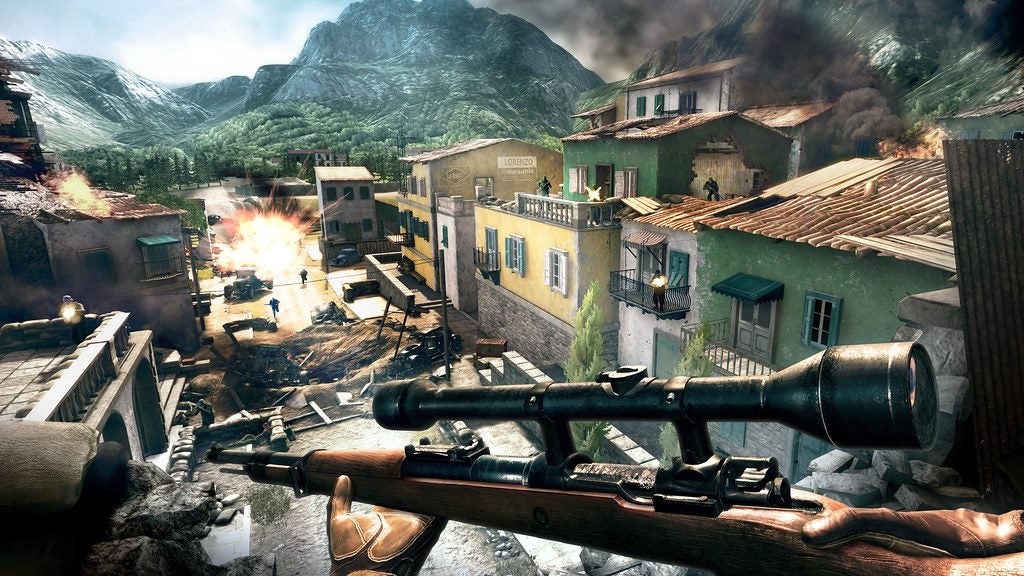 The answer? Not quite as good. However, it’s early days in the development of Sniper Elite VR, so I expect this to improve in the coming months. You move around with the analogue stick built into the Aim Controller, deciding to move in fluid continuous motions or small intervals depending on your comfort settings. At the moment it’s a little clumsy, with an unusual disconnect between real-life head movements and my virtual feet.

Fortunately, the demo was brief and on-rails, guiding me across a series of linear shooting galleries set upon dilapidated rooftops. There was no opportunity to fall to my death, but I could crouch beneath debris to avoid incoming fire, providing an added sense of dynamism to proceedings. It’s fine, yet feels oddly disconnected in relation to other aspects of gameplay. Shooting feels stellar, while movement feels almost detrimental to the enjoyment right now. It’s far from a dealbreaker, though.

During the demo I could throw grenades and switch to different weapons – namely an MP40 and standard pistol. I ran through the demo twice during my session, experimenting with different weapons to see how each worked. Much like mainline Sniper Elite experiences, you could feasibly work through this as a stealthy assassin or a full-frontal assault marine eager to make sure everyone knows you’re around. Sniper Elite is anything but subtle, and I love it for that.

While the virtual slice I experienced won’t be representative of Sniper Elite VR’s eventual release, it teases a very competent foundation I’d be more than happy to jump into. Stepping into the shoes of a sniper in virtual reality feels excellent, ensuring that nothing about what I loved from the original series was lost in translation.