This week’s pick is SkunkLock, a bicycle lock that effectively pepper sprays anyone trying to tamper with it. And our one to avoid? A light-up sports jacket that’s really a bit of a dim idea.

With the right tools, any bike lock can be cut in under a minute – so buying a stronger lock won’t necessarily stop your bike being stolen.

Embracing the theory that attack is the best form of defence, SkunkLock sprays would-be thieves with an emetic chemical deterrent, incapacitating them before they can make away with your wheels.

Go ahead punk, make our day.

Because no other lock fights back quite like this.

What exactly is it that thieving scoundrels have to contend with? A face full of a proprietary compound called Formula D_1 that causes shortness of breath, potentially compromises the thief’s sight, and can induce vomiting. Don’t worry though, it’s all completely legal – according to the manufacturers, anyway…

The noxious gas itself is stored within a pressurised container which, when compromised – with an angle-grinder, say – releases into the air and causes the would-be thief to turn and flee.

It’s a pretty hard-wearing lock in its own right, with the crossbar being made of high tensile steel and the lock bar composed of hardened medium-carbon steel. There are no electronics to be disabled, either, and it comes with multiple sets of keys in case you lose them.

The SkunkLock branding features in big red and white letters, too, which will hopefully prove to be a deterrent once word spreads amongst the local hoodlums.

Worried about releasing the gas on yourself? You needn’t be, as the unpleasant chemicals are kept safely within a hollow chamber and only released if someone tries to cut through it. 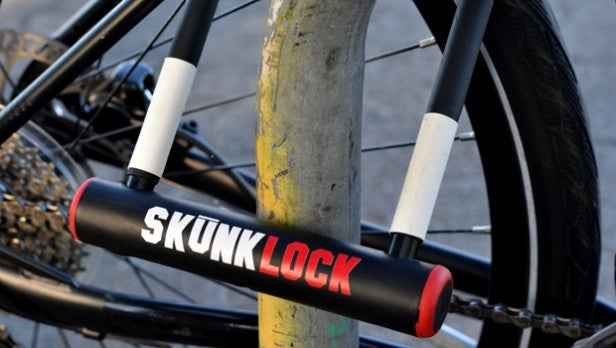 Crowdfunding isn’t like buying a product off the shelf – when you back a project, you’re offering financial support to its creators and their idea. As such, there’s no guarantee the product will ever be shipped to you, so bear this in mind before backing any crowdfunded project.

SkunkLock is listed on Indiegogo, and you learn more about its backer policies and advice here.

While Skunklock is legal in the US, it’s not allowed to be sold in some states due to the fact some versions contain capsaicin compounds (these regulations were set up with pepper spray in mind). Hence it may also be banned in some countries.

There’s also no guarantee Skunklock will stop someone stealing your bike, it’ll just make it much harder for them. What’s more, it’s more complex to manufacture than a standard U-lock, but the makers claim they have set realistic benchmarks for distribution.

All being well, it should ship in June next year.

Related: We all secretly want a robot butler – which is why we love Big-i

No. You can buy a lock alarm for your bike that’ll sound if anyone tries to steal it, and this enterprising person has hooked up a system that gives wannabe thieves electric shocks (as did these fellows in Los Angeles).

But a lock that sprays noxious chemicals? It’s never been done before. 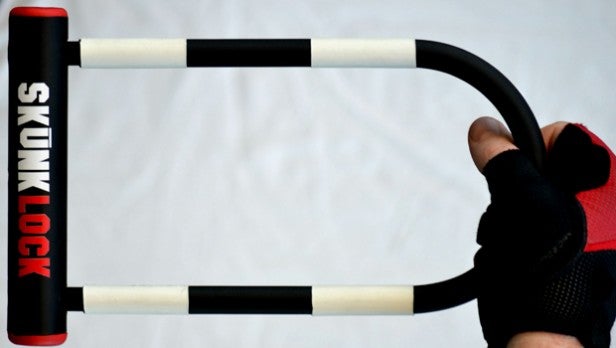 Anyone who’s ever had their bike stolen will know just how annoying it is. If you want to deter anyone from making off with your ride, then it seems a good shout.

The cheapest early bird has sold out, but you can pick one up for $109 (£89). That’s 32% cheaper than the full retail price when it lands next summer.

Fanight. It’s a sports jacket that lights up. It absorbs UV light during the day and converts it into light it can emit at night.

Or you could just buy a brightly-coloured jacket…

Let us know what you think of this week’s featured crowdfunding campaign in the comments below.