“The most extreme Snapdragon ever”, was the line that Sanjay Mehta, Qualcomm’s SVP of Compute Products proclaimed on stage at the unveiling of the new Snapdragon 8cx chip – designed for the next wave of always-on, always-connected PCs.

The 8cx shares in many of the technologies that Qualcomm showcased with the Snapdragon 855 mobile processor, launched just days earlier, but it steps things up a gear with an even greater balance of performance and power geared specifically towards connected PCs. 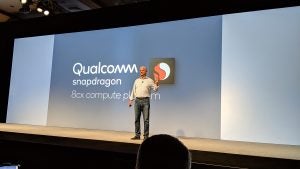 Sanjay Mehta on stage with the Qualcomm Snapdragon 8cx

The notion of being able to treat and use your laptop in a fashion similar to your smartphone is something that chip-makers and OEMs (original equipment manufacturers) have been trying to crack for a while now. Qualcomm made its first major play into the space just 18 months ago with the Snapdragon 835, which straddled laptops, tablets and smartphones. The subsequent laptop-centric Snapdragon 850, launched at Computex 2018, has already made its way into devices like the Samsung Galaxy Book 2 and the Lenovo Yoga C630.

The new 8cx is intended for the next-generation of always-connected PCs (or “ACPCs” in Qualcomm parlance), showcasing a more seamless integration between Windows and the ARM architecture on which the chip is based. 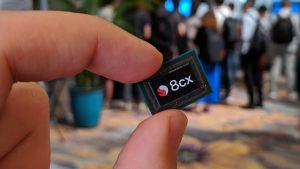 The biggest Snapdragon to date

Unlike other members of the Snapdragon 800 series, the use of letters is a little unorthodox, with Qualcomm representatives explaining that the ‘cx’ stands for “compute extreme”, although they prefer to style it as “extreme compute”. Despite similarities to the 855, Qualcomm was quick to point out that this chip has been engineered from the ground up with connected PCs in mind.

Like the 855, it’s based on an impressively efficient 7nm process, the first in this space, however, it also happens to be the largest Snapdragon chip ever. In lab testing against a competing U-series Intel i5 chip, the 8cx doled out 2x the performance, whilst needing only 7W of power (compared to 15W), and what’s more, Qualcomm continues to develop chips with fanless designs in mind.

While Qualcomm wasn’t in a position to quote figures beyond “25+ hours of extreme computing” (as no consumer devices yet sport the 8cx), representatives at the launch told Trusted Reviews that in real-world testing, most of the team had been able to land around two days use using reference hardware.

From the perspective of multimedia and productivity, the 8cx includes Qualcomm technologies like Aqstic for enhanced audio support and performance, as well as aptX HD for superior audio over Bluetooth. The Adreno 680 GPU can muster twice the graphical performance compared to the, still fresh, Snapdragon 850 and as such, it’s powerful enough to run two external 4K displays simultaneously alongside a native Full HD panel, not to mention it’s cited as being 60% more power efficient too. Like the 855, it also supports HDR10+ content as well. 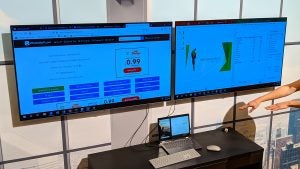 Connectivity-wise, along with improved Bluetooth and 802.11ad multi-gigabit Wi-Fi, the 8cx mirrors the 855 with an integrated Qualcomm X24 modem that accommodates up to 2Gbps 4G LTE data speeds. Qualcomm also hinted at the potential for 5G support on devices further down the line, although contrary to initial speculation, it isn’t compatible with Qualcomm’s existing X50 5G modem.

Drilling deeper into the 8cx, the octa-core Kryo 495 CPU boasts a DynamIQ architecture with a larger L3 cache (up to 10MB) compared to its predecessors and depending on the device the chip is put into, there’s also support for faster 8-channel LPDDR4x RAM, as well as high-performance NVMe SSDs (solid state drives) and UFS3.0 storage.

Qualcomm reeled off a list of support for plenty of other technologies, from own-brand capabilities like Quick Charge 4+ to standards including PCIe 3.0, USB 3.1 (second-gen) and compatibility with both Cortana and Amazon Alexa.

The company has also worked with the likes of Microsoft to ensure Windows 10 Enterprise compatibility (including Enterprise apps), with Mozilla to create a native ARM64-based rendition of Firefox (which in demos showed promise) and with Symantec on its security efforts.

When will the Snapdragon 8cx be in a machine I can buy?

Unfortunately, with the Snapdragon 850 still only just making its way into the market, we’ll have a little bit of a wait before 8cx-powered laptops, convertibles and 2-in-1s hit store shelves, with an expected arrival time within the second half of 2019.

Are you excited about the future of always-on, always-connected PCs? Let us know @TrustedReviews.