A Snapdragon 850 packing hybrid with a gorgeous OLED display

Laptops and hybrids powered by Qualcomm’s Snapdragon platform have been around for nearing a year now and while they have offered impressive endurance, the slow 835 system on a chip (SoC) just didn’t provide enough processing grunt.

The Samsung Galaxy Book 2 hopes to change this, thanks to the more powerful Snapdragon 850 inside. Instead of being primarily a phone chipset pulling double-duty as a laptop SoC, the 850 is specially designed for these Always Connected PCs, increasing the processing power without sacrificing battery life. Well, that’s the idea, anyway.

Samsung Galaxy Book 2 release date – when is it coming out?

Currently there’s no UK release announced for the Samsung Galaxy Book 2. However, in the USA it’ll ship November 2 through the Microsoft Store, Samsung online and various retail stores including AT&T, Spring and Verizon.

Samsung Galaxy Book 2 price – how much will it cost?

There’ll be one version of the Samsung Galaxy Book 2 available at launch (4GB, 128GB) and it’ll cost $999. There’s no UK price currently available, but at the time of writing, this converted to £768.

Visually, the Samsung Galaxy Book 2 looks like pretty much every other Windows 10 hybrid out there. There’s a kickstand on the back, metal body and magnetic keyboard cover that’ll clip on the bottom. A nice touch is that both the keyboard and the S Pen (Samsung’s name for a stylus) are both included in the box, something you don’t get with a Microsoft Surface Pro 6.

It looks absolutely fine and feels light and well built. It’s nowhere near as eye-catching as Samsung’s phones (the Samsung Galaxy S9 for example), but I would have no issues slipping it into my bag. There’s a couple of USB-C ports on the side, an infrared camera for Windows Hello and a 3.5mm headphone jack. 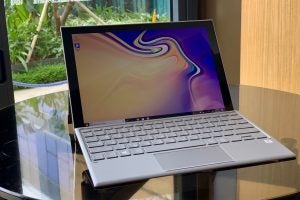 I only had a short time with the device, but I could instantly tell I was going to like typing on the keyboard. There’s plenty of travel and the keys aren’t mushy – for a detachable keyboard this is impressive. I wasn’t quite so much a fan of the trackpad though, which is quite small and oddly narrow. Still, it felt plenty responsive, so that’s something.

On the front there’s a 12-inch Super AMOLED display packing a 2160 x 1440 resolution and it’s as good as you’d expect from a screen on a Samsung product. OLED tech is still rare on tablets and laptops and it makes such a difference when watching videos and looking at photos. Blacks are nice and inky, colours rich and vibrant to the point where they really pop out of the screen. Whether or not it’s the most accurate display remains to be seen – we didn’t have our colorimeter to hand, nor would we have been able to run our typical testing software on the Galaxy Book 2 in the time we’ve had to look at it. Whatever the numbers say, it’s certainly an absolute pleasure to look at. 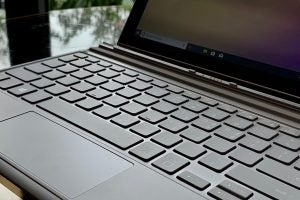 An issue for some might that chunky bezel surrounding the panel. They look worse in pictures than in person and give your thumbs somewhere to sit when you’re using it as a tablet. But, yeah, it does seem somewhat old fashioned, especially when compared to higher-end laptops like the 13-inch MacBook Pro 2018, and most Chromebooks. Then again, the bezels of the Surface Go are also on the big side, so maybe that’s just par for the course for 2-in-1s like this.

What really sets this device apart from other 2-in-1s is the Snapdragon 850 platform inside. Instead of being a mobile-focussed chipset, like the 835, it’s built specifically for devices like this and Qualcomm said performance should be much improved. Snapdragon laptops and hybrids using the 835 performed poorly, so it’ll be interesting to see what has changed here. During my time with the device, apps opened up quickly and web-pages loaded equally so, but we’ll really need to run it through our review process to see how it stands up to prolonged use.

The biggest issue with this Snapdragon 850 is that it’s ARM-based chip, so there will likely be issues with x86 app compatibility as they’ll be using an emulator. Again, wait for the full review to see how much of an issue this is. There’s also 4GB RAM, 128GB storage and Windows 10 S Mode enabled by default (this can easily be turned off, though). 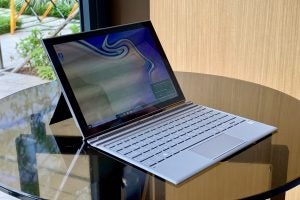 Battery life alone could be a good enough reason to pick one of these up. Samsung is claiming 20 hours of juice on a single (presumably this will take a hit if switch from Windows 10 S to full-fat Windows 10) and that sounds pretty impressive to us.

It might look a bit dull, but the Samsung Galaxy Book 2 has a lot going for it. LTE connectivity, thanks to the Snapdragon 850, a gloriously colourful screen and both the keyboard and S Pen stylus included in the box plus impressive-sounding battery life mean it’s got a lot to offer. It’ll all come down to performance though and how the Galaxy Book 2 operates under stress remains to be seen.