Samsung has been showing off some 5G-capable hardware at Qualcomm’s annual Snapdragon Tech Summit in Hawaii and the test device on show might have dropped a few hints as to what we can expect from the forthcoming Galaxy S10.

“This is in no way indicative of Samsung’s consumer-ready hardware,” the Samsung representative told Trusted Reviews at the company’s 5G demo booth during the Snapdragon Tech Summit. Showcasing cellular technology like 5G isn’t particularly easy, nor is it particularly sexy (as tech goes), but Samsung at least made a good go of it. 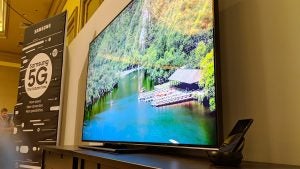 Using a 5G network set up specifically for the event, Samsung had plugged an innocuous-looking smartphone into one of its DeX Stations, which in turn was connected up to a 4K TV via an HDMI cable. The demo showcased 4K HDR10+ content, streaming at 60fps and at 30Mbps; it looked very nice. The validity of the test was hard to verify under the circumstances but assuming what we saw on that TV was streaming live over a 5G network – even a small one, it is at the very least indicative of the good things that 5G has in store.

As for the test phone that Samsung was using to showcase this 5G footage, it bore a resemblance to a number of the most recent Galaxys but came with some design quirks all its own. For starters, it had a notch and based on the company’s current portfolio, it’s the only Samsung smartphone ever to sport one. Stranger still is that the notch sat in the top right-hand corner of the display, cutting deep into the screen real-estate, while the small front-facing camera was floating up near the top. 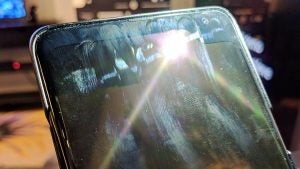 Unable to touch the device or turn on the screen, we had to get creative in order to show off the notch. They wouldn’t even let us polish it up first.

It seemed like a waste of space and had no real need to be there, assuming the intention was to accommodate the front camera but as such, we’ve been left wondering whether it was necessary for the additional 5G components or some other reason.

Being unable to pick the phone up or switch it on, as per the request of the reps guarding the device, any other observations could only be made in its passive state. It appeared to be clad in some sort of low-profile case that covered the majority of the phone’s back half, because of this, the device may well sport a glass back, but we couldn’t tell. The sides were metal and along the left edge sat a volume rocker with a single hard key underneath, presumably for Bixby. 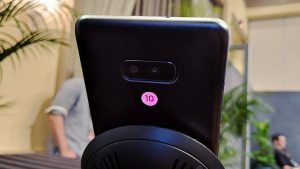 The fact that it was plugged into a DeX Station also suggests that it was connected via USB-C. On the back was a dual camera arrangement and while it’s unlikely that the S10 will feature such an unassuming pair of small sensors, it will be interesting to see whether the company is planning to opt for a horizontal array as on the Note 9, rather than the verticle setup that the Galaxy S9 Plus currently packs.

That was about all we could glean from our eyes-on time with Samsung’s 5G test device; a product that might have created more questions than it answered. At least we know that the phone will sport Qualcomm’s newly announced Snapdragon 855 processor (at least in markets like the US).

During the opening day keynote, Samsung’s Justin Denison confirmed that “we [Samsung] are going to be bringing a 5G smartphone to the US in the first half of 2019,” which he followed up with, “it’s powered by the Snapdragon 855 chipset”.

Qualcomm has already given us some information on its new Snapdragon 855 mobile processor but more details are expected to be revealed in the days to come.