What is Samsung DeX?

A phone that can double up as a PC has long been a dream of techies. The business case for having one complete computing device for on-the-go tasks and desk-bound work is pretty strong.

Windows 10 Mobile Continuum made a commendable first step into this world, but it’s Samsung that’s taken up the mantle with DeX, a £120 dock that supports the latest Galaxy S8 and S8+ smartphones.

As a piece of design the DeX looks pretty cool, but it’s rather impractical. Think of it as a small black plastic pie, with the pastry lid that can be slid back to reveal the USB-C connector and which forms a resting place for your docked phone. 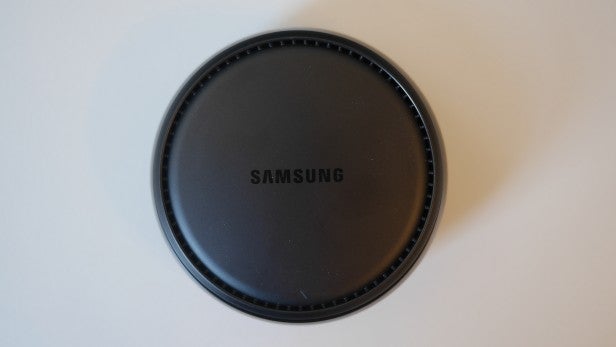 The innards of the dock contain a cooling fan for the heatsink, with the external ports consisting of the following: USB-C for power, HDMI, two USB 2.0 ports and an Ethernet connector for wired internet. 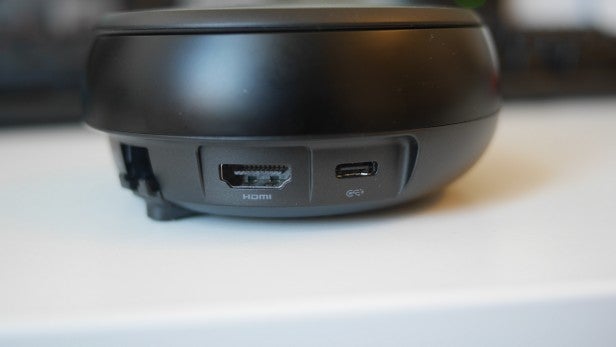 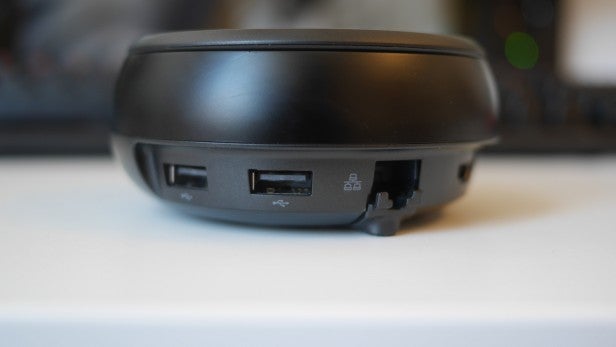 The DeX dock is annoyingly inflexible. Unlike Microsoft’s Display Dock, which allows you to place your phone anywhere, the DeX requires your phone to be locked into place at all times. Also unlike the Display Dock, docking the phone results in complete deactivation of the screen, so there’s no second-screen fun to be had here.

The positioning of the dock means the phone’s speakers fire downwards into the base, providing a fairly poor-quality experience. The headphone jack on both the S8 and S8+ sits along the bottom edge of the devices, so there’s no way to plug in wired headphones or speakers. The only way you’ll be able to connect to external audio is if your monitor has speakers or a 3.5mm audio out cable, or if you have a Bluetooth speaker to hand. 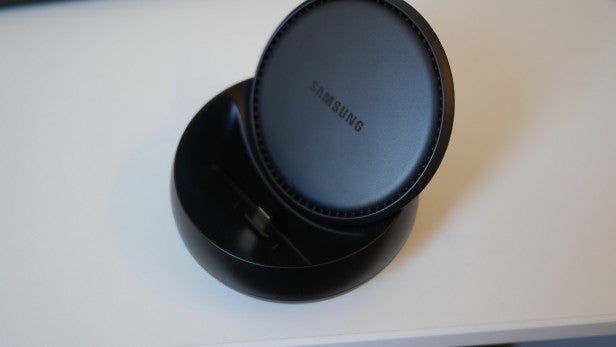 To fire up DeX, simply place your Samsung phone into the powered dock and things will immediately start happening. The phone’s screen will turn off and, within a few seconds, the DeX log-on screen will appear on your monitor.

The desktop is a big-screen version of Android, and it’s nearly as good as Google’s ChromeOS. There’s an app menu, a notifications tray, and status bar including battery percentage and phone signal indicator. 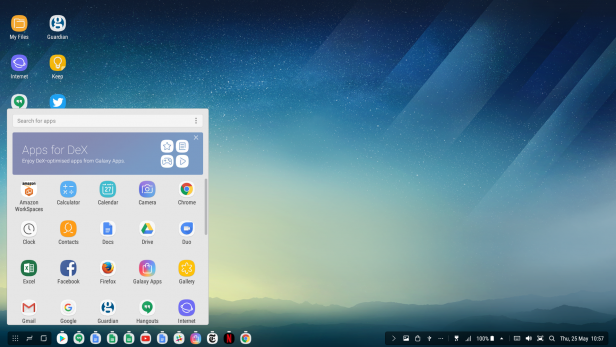 It supports conventional Windows key commands, including the Windows key to open the app drawer and Windows+Right or Left to snap windows to the left or right of the screen. You can move windows around the screen or lay them on top of one another and they’ll continue to run without issue.

Anyone who’s tried to use Android multi-window iterations in the past will be aware of the feat achieved here: Samsung seems to have nailed it first time. 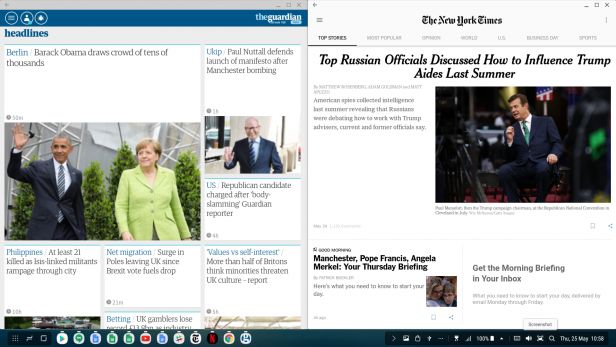 Snapping windows to take up half the screen is easy

The advantage of Android is clear: there’s an enormous number of compatible apps, and many of them work without any issues at all. However, there are some key apps that don’t work at all – or work with major issues. Spotify and Audible are incompatible, and Netflix will run in only a tiny, smartphone-sized window. Meanwhile, Google Sheets thinks you’re using a phone and zooms in to compensate.

Slack works well, but it refreshes messages only when it’s the active window. So you won’t be able to keep an eye on it for new messages and instead will have to periodically click on it and wait a couple of seconds to see if new messages have arrived. 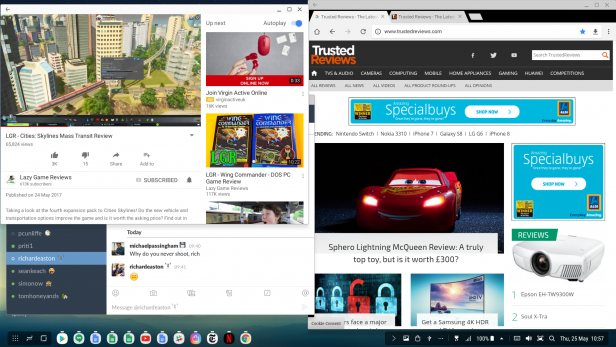 Even with lots of apps open, the Dex was pretty smooth

If you want a good experience, you can open up the DeX app store, which ambitiously features listings for the top 500 most popular apps – of which there are only 18 right now. Some are useful, including the New York Times, Microsoft Word and Excel, and Skype. There’s also TripAdvisor, Craigslist and an ad-supported, rather clunky, photo-editing app.

I did suffer the occasional crash. Chrome and YouTube in particular had a few moments, but nothing really awful happened and I didn’t lose any work. Even if you undock the phone without warning, DeX will save the windows you have open and re-launch them from memory when you re-dock your phone. 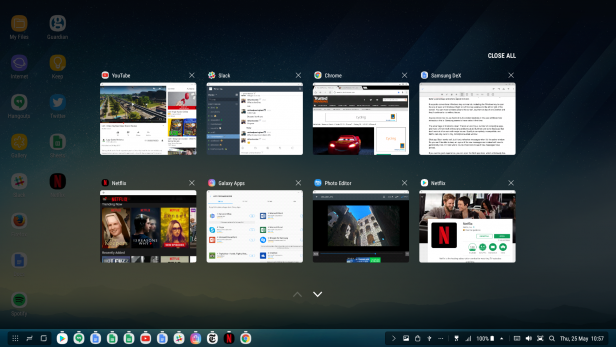 I got on perfectly well with the apps and services I use all the time. Google Docs works as well as it does on phones, but is bigger, and YouTube in a window is genuinely handy. The Chrome browser loads sites quickly in their full desktop mode – ads and all – without problems.

That’s the theme here: DeX manages to do almost everything competently, but it’s also limited by Android. Nothing feels quite natural, because even though you’re using a mouse, most apps are designed for touch. In particular, selecting text and moving it around is annoying, because you have to do a long click and drag, which doesn’t feel natural. And having to pull down to refresh news apps such as the Guardian, for example, feels plain wrong on a mouse. It’s minor, but it all adds up.

I was initially impressed with how smooth DeX handles. Even with numerous apps open, I didn’t experience any slowdown. Then I remembered it was being powered by the beefiest smartphone in the world, which costs over £700. If I was using a £700 laptop I’d expect at least this level of performance, if not more. 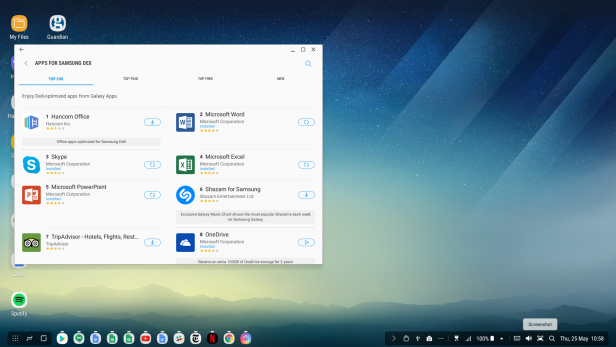 And that’s the crux of the issue with DeX. It’s a mighty impressive piece of software that has benefitted from some real care and attention, but it still bears the flaws of the Android version on which it’s based. It’s a good demonstration of what can be achieved in the future, when cheap smartphones improve in terms of performance. However, for everyday folk who will likely have a laptop provided by their employer, or already have a perfectly decent desktop at home, it’s a fun but superfluous addition.

Should I buy the Samsung DeX?

A £120 dock in addition to a £700 phone really doesn’t feel like good value, no matter how good the software. Even if the software was perfect – which it isn’t – the DeX is a hard sell.

However, I’m excited to see how it will have progressed in a few years. When we can all dock our £100 Samsung Galaxy J phones into a £50 DeX dock and have a good experience, then we’ll be talking.

The best hybrid desktop/phone solution yet, but it isn’t for most people.