You can now watch an excerpt from David Attenborough’s new Planet Earth II series in 4K Ultra HD resolution. Ultra HD relates to the number of pixels on a screen: While Full HD televisions have 1,920 x 1,080 pixels, a 4K display will have 3,840 x 2,160 pixels. That means you should see a much more detailed image, which is great for Planet Earth II’s highly cinematic viewing.

But the other advancement is the introduction of HDR on iPlayer – that’s High Dynamic Range. HDR footage has a wider range of brights and darks on offer, so the video should be more detailed in dark sections, brighter and more detailed in light sections, and packing a generally wider colour range overall.

The BBC is using a specific type of HDR called HLG (Hybrid Log-Gamma), which was developed in part by BBC R&D. The bad news is that only select Panasonic TVs currently support this type of HDR – so many viewers won’t be able to take full advantage of the new iPlayer footage.

However, the BBC has rolled out the footage out to some Sky and Virgin customers, albeit not in HDR just yet.

If you have a Sky Q subscription, iPlayer users will now see a “Try UHD” section featuring the Planet Earth content. Virgin subscribers with a new 4K-enabled V6 set-top box can also check out the clip.

The four-minute clip features a “jaguar emerging from the shadows to stalk its prey…rain dropping on tiny animals and their habitats…and a frog in a shade of red never before seen on a TV,” according to the Beeb.

You can see all of the compatible TVs and devices here.

Your final option – if you have the right kit, of course – is to snap up the Planet Earth 2 4K UHD Blu-ray. 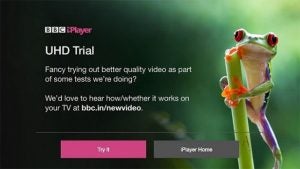 Speaking about the news when it was first announced, Phil Layton, Head of Broadcast at BBC’s R&D division, said: “One of the clips is a frog on a leaf with lots of rain, and the reason this is so interesting is that the redness of the frog is a really deep Ferrari red that you would never get in broadcast television at the moment.”

“We want to show that this is how the BBC could make ultra-high definition HDR material available to iPlayer,” Layton continued. “And we want to use this as a trigger to work with manufacturers to get their products updated so there’s a pathway there for future on-demand BBC content.”

The BBC promises to make the footage available on different smart TV versions of the iPlayer app “as soon as the relevant models support it”, but says it will “be some time” before we’ll see scheduled 4K and HDR broadcasts. Layton believes that the technological challenges could be resolved within the next year-and-a-half, but the BBC notes that “the majority of viewers” still don’t have HDR televisions.

By way of constast, Amazon and Netflix already offer 4K and HDR content, while Sky and BT have recently begun broadcasting movies and sport in 4K.

Is this the excuse you’ve been waiting for to upgrade your home entertainment set-up? Share your thoughts in the comments below.