Following months of anticipation Insomniac Games’ vision of Marvel’s Spider-Man is almost here, with a sweeping open-world superhero adventure filled with iconic villains to fight and a massive city to explore. Available exclusively on PS4 from September 7, now’s the perfect time to prepare to dive in, whether you’re on a standard console or PS4 Pro.

Of course, it’s a daunting game, so Trusted Reviews has compiled an essential list of tips and tricks for Marvel’s Spider-Man.

Spidey is renowned for his epic means of traversal, using his web-slinging abilities to swing about the place. Whether he’s sprinting through the streets stopping the bad guys, or climbing up skyscrapers, Insomniac has crafted plenty of ways to get around.

Remember to Point Launch. Activated by pressing L2 + R2 together, this ability can zip you effortlessly to targets and buildings, regardless of the space you currently occupy. It also looks impressive, showcasing the webhead at his athletic best.

Being a big city, there’s plenty of sharp, tall corners in Spider-Man. Luckily, holding circle when hurtling towards buildings will initiate a wall-run, where our superhero will automatically turn a corner. This should help keep up momentum, waving away worries of being stopped in your tracks for no good reason.

By holding L2 while on a ceiling or wall-crawling, you’ll descend to a precarious hanging position that’s controlled with the left thumbstick. This provides you with additional insight on the area, putting you in a perfect position to survey enemies and plant a trap or two. 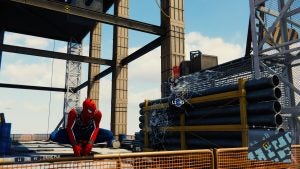 Traversing in style rewards with experience, which will increase if you’re willing to implement aerial tricks in your repertoire. Combine these while mounting obstacles and you’re likely to earn even more rewards!

Conquer the city of Manhattan

There’s an overwhelming amount of stuff to do in New York, and Spider-Man is free to take it all in at his leisure. This could be fighting criminals or snapping a few selfies with citizens. Knowing this, it’s easy to fall behind. So, what should be your focus?

You can unlock a total of 25 costumes in Spider-Man, each of which possesses a unique aesthetic and abilities while paying homage to a special chapter in the wall-crawler’s legacy. They’re some of the best rewards you can find, and well worth seeking out across the game’s world.

Suit powers can also be mixed and matched, according to the way you like to play. This means you don’t need to equip a costume you don’t quite like the look of to take advantage of its abilities. Insomniac clearly knows a thing or two about fashion. 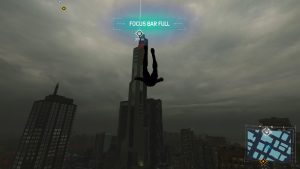 For newcomers and hardened fans, the world of Manhattan is packed with nifty little details that are worth discovering on your journey. Visiting newsstands to read the Daily Bugle will reflect in-game events, while viewing items in the pause menu allows Peter Parker to comment on them.

Oh, and be sure to take plenty of selfies. Not only are they fabulous, but you’ll also be rewarded for completing challenges related to snapping famous landmarks. If you’ve never been to New York, this is the next best thing.

Does whatever a Spider can

Combat in Marvel’s Spider-Man is all about precise timing and ensuring your dodges are timed correctly to execute counter-attacks. Much like Rocksteady’s Arkham series, you can build up a spectacular range of combos across enemies big and small. One standout skill is ‘Payback’, which will see you instantly take down an enemy after a perfectly timed dodge.

The environment can be used in fights if you’re creative enough, and can even be applied to reveal enemy weaknesses. Some might be susceptible to electricity, while tricking enemies might even result in a case of friendly fire. Opportunities are everywhere, and they’re a joy to manipulate.

Enemies can be fought on the ground or pulled into the air for a vicious swing, before being slammed into the ground for maximum damage. The aforementioned gadgets can be switched around during combat, so be sure to prioritise the right ones for each occasion.

Impact webs can be used to stick enemies to walls, while a concussive blast can be used to clear you some space. Your gadgets are mostly centred around disabling enemies to put the heart on them, but even the most troublesome goons in the game can be quickly taken out if you hit them with webs at the right time.

Spider-Man is a sneaky bugger, so of course stealth can be a major part of your experience. That is, if you choose it to be. Do your best to avoid enemy line-of-sight while webbing to walls or onto ceilings to both incapacitate them and keep others unaware.

Will  you be picking up Spider-Man on PS4 when it launches? Let us know on Facebook and Twitter @trustedreviews.