Kobo Aura One vs Kindle Paperwhite: We take a look at whether Kobo’s new e-reader has what it takes to compete with Amazon’s most popular offering.

Haven’t you heard? Paper books are out, and glowing screens that stop us sleeping are totally in. At least, for a lot of us they are. And while you’re probably used to hearing the word Kindle used as a synonym for ebook readers, there are other options out there.

Enter Kobo’s latest effort, the Aura One. It’s a premium e-reader that packs enough decent hardware to make it a serious Kindle competitor.

That’s why we’ve decided to pit what might be Amazon’s most popular Kindle, the Paperwhite, against this new kid on the block in what could easily be the battle of the century. Read on to see which device triumphs.

Design can make a big difference when it comes to e-readers, as you’re going to be holding the device for a long time. Amazon made much of this fact when it launched the Kindle Oasis, extolling the virtues of its fine balance. So where does that leave the more mid-range Paperwhite?

The design hasn’t changed much since the first version was launched in 2012. The Paperwhite is all matte-black (or white) plastic with a soft-touch finish. That adds to the device’s holdability, as does the fairly large bezel around the screen. It might not look particularly chic, but it means there are more ways to grip the device without obscuring the screen.

We’re yet to get our hands on Kobo’s alternative, so we’re not entirely sure how comfortable it is to hold or how well designed it is. It certainly looks as though it adheres to standard e-reader design features: it’s a black rectangle with a screen on it. It seems as if Kobo has added a nice metal trim to the thing, though, so it could look slightly more upmarket than the Paperwhite. 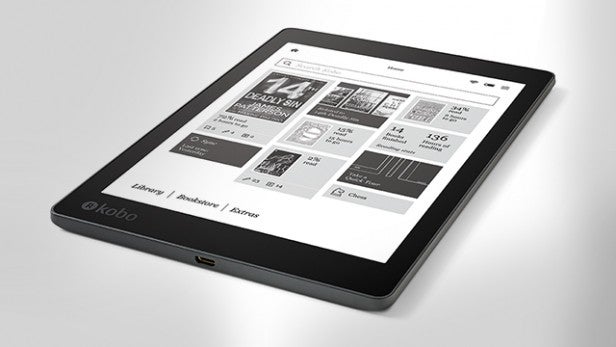 All of which is fine, but how much do these things weigh? After all, that’s what’s going to make the biggest difference when it comes to holding the two devices.

At 205g for the Wi-Fi version and 217g for the 3G model, the Kindle Paperwhite can be held for long periods without your arm giving out on you. In terms of dimensions, it measures 169mm x 117mm, and comes in at 9.1mm thick. The Kobo, in comparison, measures 195.1mm x 138.5mm, so it’s considerably larger than the Kindle. But it’s also thinner at just 6.9mm, which should help to level things out in terms of comfort.

Kobo’s device also weighs slightly more at 226g, which shouldn’t make too much difference, but, again, we’re yet to test it out. 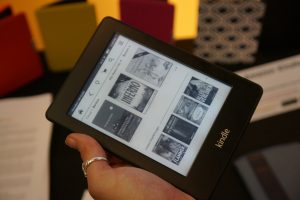 One thing to be aware of, and which we found slightly disappointing in our review of the Paperwhite, is the lack of page-turning buttons. All navigation on Amazon’s e-reader is handled via the touchscreen, which works perfectly well, but we love the dedicated page-turn buttons on the Voyage, and would’ve loved to have seen them on the Paperwhite.

And it seems the Aura One is also lacking any dedicated physical buttons, too. A shame, but not a deal-breaker by any means. And it means the two machines are equally matched in terms of their button offerings.

So what about those all-important screens? E Ink displays are continually improving, and have got to a stage now where they really do make a difference over a prolonged period compared to staring at a tablet or phone screen.

As such, you’ll be pleased to know that both these e-readers come with excellent screens. The Paperwhite’s 6-inch 300ppi (pixels per inch) Carta display matches the resolution on the higher-end Kindle Voyage, and makes for super-clear text – though it’s still monochrome, so no colour reproduction here. 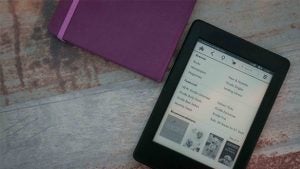 But Kobo has gone one better in this respect and fitted the Aura One with a 7.8-inch Carta screen. It’s still 300ppi, though, so probably won’t offer any major improvements over the Paperwhite in terms of how sharp the text and images appear. The larger size should mean you’re not turning the page as much, however.

Another big consideration when it comes to e-reader screens is eye-strain, and the steps companies take to reduce it. . It’s also quite good in direct sunlight, which is a big bonus for those planning to indulge in some outdoor reading.

Kobo has added a feature it’s calling ComfortLight PRO. An ambient light sensor will automatically detect the light levels in whatever environment you happen to be reading in, altering the screen brightness and temperature to the optimum level. Plus, if you set a bedtime, the screen’s hue will ‘mimic the sun’s natural progression’, which we assume means it’ll filter out that nasty, sleep-disrupting blue light we’ve heard so much about. We’ll let you know when we’ve tried it out.

Both offer front-lit displays, so they’re kind to your eyes. 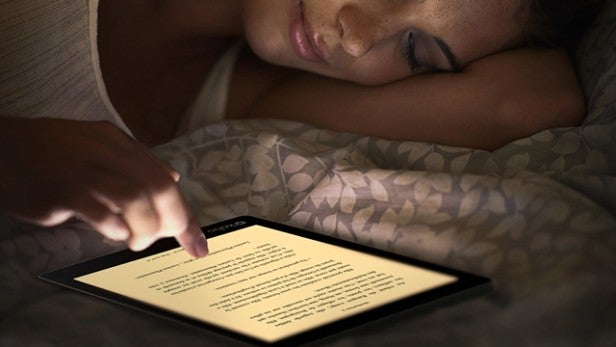 All in all, then, it seems Kobo has the upper hand in the display stakes. While the Paperwhite and Aura One are evenly matched when it comes to arguably the most important screen spec, the resolution, the latter has a few extra features which make it a more capable offering.

Kobo has provided more than enough raw power to ensure a smooth experience when using its new e-reader. Powering the Aura One is a 1GHz processor and 512MB of RAM, which is exactly what you’ll find under the hood of the Paperwhite. These specs are more than enough to power these devices, so expect speedy performance from both.

Things look a little different when it comes to the internal storage, however. Whereas Amazon’s e-reader comes with 2GB, Kobo provides a more generous 8GB for storing all your e-books. Seeing as e-books take up very little in terms of storage, you’ll still be able to load thousands of books onto your Kindle, but there’s no denying the Aura One dwarfs the Paperwhite in this department. 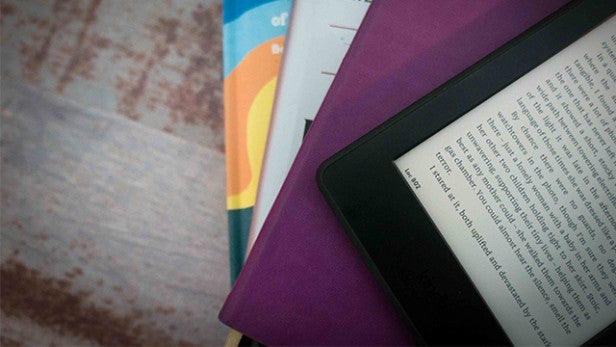 One area where the Paperwhite seems to outdo the Aura One, however, is connectivity. Both machines support 802.11b/g/n Wi-Fi, but you’ve got the option to add 3G connectivity on the Kindle, for downloading e-books on the go. You pay a bit more for the device outright if you choose to add this, but the service itself is free, with no monthly payments to contend with.

Not to be overshadowed too much, Kobo has made its device waterproof. The IPX8 rating means you can drop the Aura One in water to a depth of 2m for up to an hour. The Kindle, on the other hand, isn’t something you’re going to want to read in the bath.

Kobo Aura One vs Kindle Paperwhite – Software and features

Kobo’s device comes with a load of extra features, including the ability to alter the typeface with precision. The TypeGenius feature allows you to fine-tune the weight and sharpness of the font, and you have a choice of 50 font sizes and 11 typefaces. You can also adjust margins, highlight passages, write notes, and look up words with the built-in dictionary. On top of that, the device tracks your reading, so you can check your own reading stats. Just how this works remains to be seen, but we’ll check it out for ourselves when we review the Aura One. 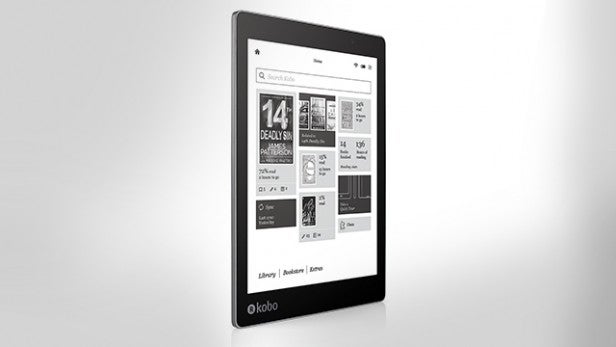 Other features include the ability to share favourite passages or quotes to your Facebook timeline, as well as support for English, French, German, Spanish, Dutch, Japanese, Italian, Portuguese and Turkish languages.

In terms of text customisation there are eight font sizes to choose from. Goodreads access means you can find and share new books with others very easily.

And when it comes to all-important ebooks themselves, Kobo’s library features more than five million titles which you can download when connected to Wi-Fi. Amazon’s library features four million books, newspapers and magazines, and there’s a load of free books – one million, in fact – for you to get stuck into. 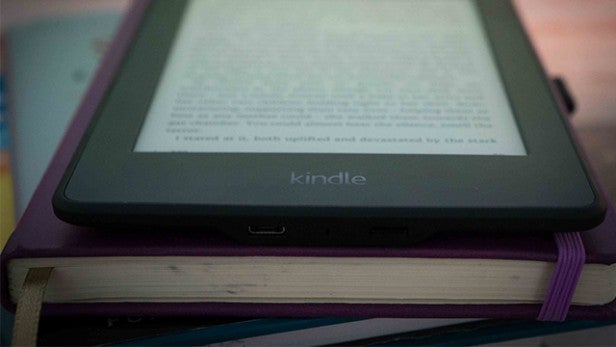 One thing about the Kindle which has always seemed strange to us is the inability to listen to audiobooks. Amazon owns Audible, and it would be nice to be able to switch to narration. And it seems Kobo has decided to take a similar route with the Aura One, which also comes without audio.

In terms of features, then, the two devices seem to fairly evenly matched.

Kobo says the Aura One’s battery will last a month before it needs recharging, and that this will allow you to read an entire book before the device needs recharging. We’re obviously yet to test this claim, but it seems about right in e-reader terms.

Amazon, on the other hand, claims you’ll get six weeks’ worth of use out of the Paperwhite before you need to reach for the charger – a claim we found to be mostly accurate in our review. 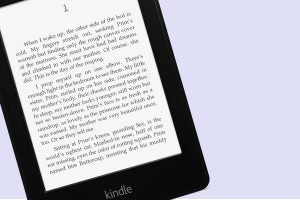 So it seems Amazon has the upper hand in this department, which makes sense, as there’s no ambient light detection to power and the screen is smaller. We’ll confirm this once we review the Aura One, however.

Kobo Aura One vs Kindle Paperwhite – Price and release date

Kobo’s device will be available in the UK from September 6 in black, and will cost £189.99. You’ll be able to get your hands on one through kobo.com, as well as other participating stores which are seemingly yet to be named.

The Kindle Paperwhite is undoubtedly the best all-round e-reader available. It’s comfortable to hold, easy on the eyes, and comes with enough extra features to make it a worthwhile investment.

The Aura One, which we’re yet to get our hands on, also seems like a stellar offering, with a more capable front-lit screen and slightly more refined design. Again, we’ll have to wait until we can review it to confirm this.

In reality, then, the Aura One seems more akin to the higher-end Kindle Voyage, especially considering its £189.99 price. With that in mind, we can’t help but feel the Paperwhite is a more worthwhile investment for the casual e-reader, coming in at a much lower cost for the basic model and providing just as sharp a screen, minus the ambient light detection.

Unless you really want to read in the bath or are particularly worried about the effects of blue light on your sleep, the Paperwhite appears still to be the better choice of e-reader. We’ll have more once we’ve reviewed the Aura One.

Let us know in the comments which one you think wins this intense battle.