Apple’s finally unveiled a new iPad Air. But with over half a decade having passed since the iPad Air 2 hit shelves and Apple having unveiled a new line of iPad Pro tablets, who is the new Air for?

Here to help we’ve created an early comparison of the devices. Make sure to stay tuned though, as this is a very early verdict based on specs, and our experience using the 11-inch iPad Pro and 12.9-inch iPad Pro. We’ll update this article with a more in-depth comparison when we get the new iPad Air (2019) in for review.

Looking at the press shots the new iPad Air (2019) looks very similar to Apple’s other iPads. They all feature the same metal chassis and iconic home button on their front.

But look a little closer and you’ll sport a few differences. For starters the iPad Air (2019) is only available in one size, 10.5-inches. This makes it smaller than both versions of the iPad Pro, which is available in 11-inch and 12.9-inch configurations.

The biggest design differentiator is that the new iPad Air (2019) charges using a Lightning port. This is a minor annoyance as it means you’ll have to lug Apple’s proprietary USB to Lightning cable with you if you want to charge the new iPad Air (2019) on the go. Personally we’d have liked to see Apple use the newer, more common USB C standard featured on its Pro line.

This also means the new iPad Air (2019) is only compatible with the older Apple Pencil, which charges via the Lightning port, rather than the new Pro pencil which charges by magnetically docking to the newer iPad Pros. 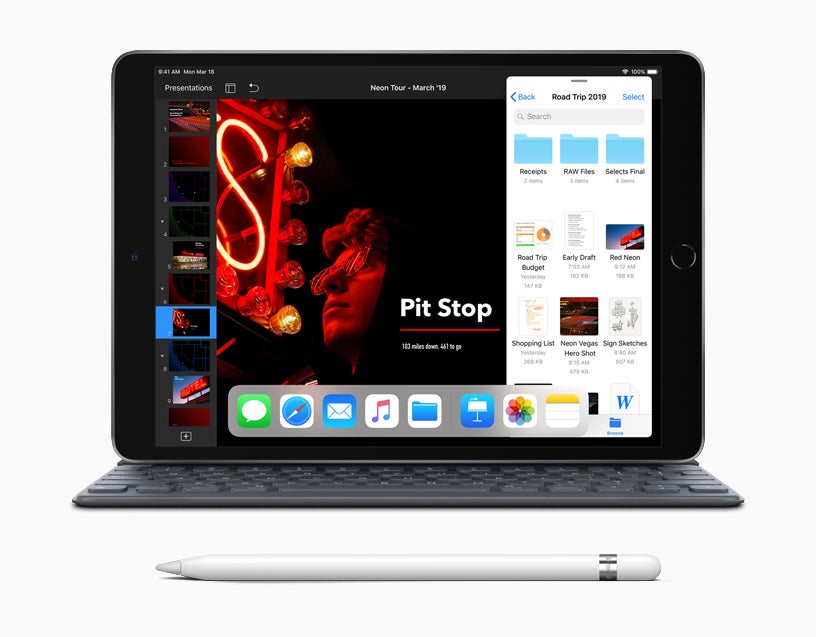 The new iPad Air is for the most part a top notch tablet when it comes to hardware and on paper will meet most users needs. But it does come with some compromises when compared to Apple’s more premium iPad Pros.

Storage options are also less generous on the new iPad Air (2019), which caps out at 256GB of space. The iPad Pros meanwhile top out at a hefty 1TB. Most general users won’t need that much internal storage, especially with iCloud in play, so this is hardly a deal breaker.

Performance and camera tech are the final areas that have seen some cuts. The new iPad Air (2019) runs using an A12 Bionic, while the iPad Pros use the more powerful A12X Bionic. This means the iPad Pros have more powerful graphics and will be better at running games and intensive creative projects, like vector artwork and video editing.

However, the regular A12 is hardly a slowpoke and given the new iPad Air (2019)’s lower 60Hz refresh rate screen, which is significantly less demanding the the Pro’s ProMotion, performance shouldn’t be an issue on any of the iPads for regular users.

You can see a more in-depth breakdown of the new iPad Air (2019) and iPad Pros’ specs in the table below.

You can buy all three iPads now on the Apple store, though the new iPad Air (2019) is by far the cheapest.

You’ll have to shell out more if you want to grab a folio keyboard case or Apple Pencil with all three.

The iPad Air has lower specs and older tech than its Pro siblings. But when it costs so much less this is hardly surprising. The hardware is also still more than good enough to meet most users needs. If the new iPad Air (2019) delivers during our full review we can see it being the best iPad for casual office workers and students looking for a tablet that can double up as a note-taking station.