Huawei has announced its new flagship phone, the Huawei Mate 30 Pro, just a week on from Apple’s own iPhone 11 Pro unveiling.

That’s what we intend to find out below. But first, if you want the TL;DR take, check out the following bullet points.

Both manufacturers have made their own 7nm silicon here.

The Mate 30 Pro comes with Huawei’s latest Kirin 990 chip. It’s likely to be a decent step up from the Kirin 980 that proved so effective in phones like the Huawei P30 Pro.

However, it’s highly unlikely to approach the performance capability of the iPhone 11 Pro’s A13 Bionic chip. It’s said to be 20% faster than the A12, which still trumps any other chip on the market as things stand.

One area where the Kirin 990 does have bragging rights, however, is with its support for an integrated 5G modem. However, this will only apply to the dedicated (and more expensive) Huawei Mate 30 Pro 5G, not the regular Pro.

The Huawei’s 8GB of RAM doubles that of the iPad 11 Pro, but the differences between the operating systems renders this point pretty meaningless. Ultimately, both will be very fast, but it’s the iPhone that we’re expecting to top all the benchmark tests. 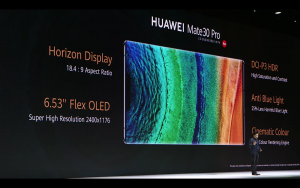 Things should be much closer when it comes to camera performance. Huawei has been one of the front-runners in recent years, to the point where it’s Apple that has work to do to catch up.

It’s impossible to call a winner at this point, but it could be quite close. Both pack triple-camera systems, though that’s where the inherent similarities end.

Apple looks to be closing the gap to Huawei and co with its own Night Mode, while a forthcoming Deep Fusion mode will boost dimly lit scenarios.

One the display front, this is an all-OLED confrontation, which means stacks of vibrant colour and deep blacks all-round. However, the Huawei Mate 30 Pro’s 6.5-inch display is much bigger than the iPhone 11 Pro’s 5.8-inch tiddler. Apple’s will be sharper, however, with pixel density of 458 ppi. The Mate 30 Pro screen can only reach 409 ppi.

The Mate 30 Pro comes with a 4500 mAh battery, which is much bigger than the iPhone 11 Pro’s 3190 mAh unit. We’ve been impressed with the stamina of Huawei’s phones of late, so we wouldn’t be surprised to see it dominating this area.

Talking of batteries, the Huawei supports reverse wireless charging, while the iPhone doesn’t.

These two flagship phones are slabs of premium glass and metal, but aside from a similar long and flat screen notch (which means both support advanced 3D facial recognition), they don’t look too alike.

The Huawei Mate 30 Pro is also 10g heavier than the iPhone 11 Pro – which isn’t actually that much when you consider the size difference. 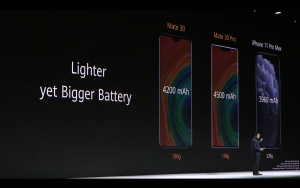 Huawei’s phone is arguably the more eye-catching of the two. It features a dual-curved display, rather like the Samsung Galaxy Note 10, while Apple goes with a much flatter design for the 11 Pro.

The Chinese manufacturer has also gone with an earpiece-less design, which gives the front a slightly cleaner look. Similarly, it’s done away with side-buttons altogether in favour of a touch-sensitive option.

Both phones have eye-catching camera bumps in their own way, though they look very different. Apple has arranged its three sensors in a bunch on a raised square module to the top left of the rear. Huawei has centred its own lenses and arranged them in a straight line at the heart of a large circular module.

Perhaps the crucial area here will be the look and feel of the software. Apple’s iOS 13 is as slick as ever – or will be, once it’s ironed out some bugs. It keeps adding the compelling features too, with early impressions of the Apple Arcade subscription gaming service being overwhelmingly positive.

Huawei is in a pretty big mess by comparison, with a version of Android 10 that completely lacks Google’s service and app support. You don’t even get there Google Play Store here, forcing you to rely on Huawei’s own lesser effort.